The 2019 Hollmann Awards: Part One

The first part of the 2019 Hollmann Awards. Familiarize yourself with the nominees first, then come back here to see nine of the eighteen categories, presented as they came up in my random draw (I write the categories on scraps of paper, roll them round in a collectible Storm Trooper popcorn bucket from Solo, then select at random to decide the order). Beginning with... 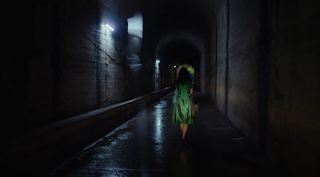 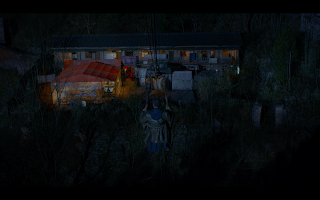 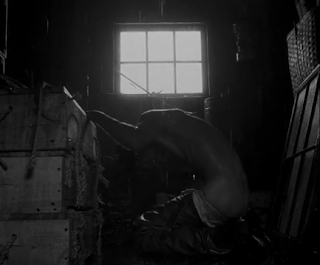 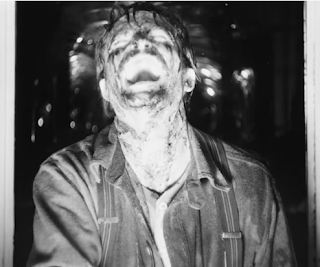 I guess horror has been my go-to for this category for a while now (the three previous winners: Suspiria, The Void, and The wailing), but I barely think of the gore when I think of the work on this film. Instead, I'm reflecting on the men's curls and perms; the suspiciously bright blond locks on Nicolas Maury; Vanessa Paradis' makeup running down her face in the rain; and then the horror elements like murder victims and bird hands.

In second, Renée Zellweger's convincing transformation in Judy. In third, Joaquin Phoenix's wave of violence and careful transformation in Joker. In fourth, the dred-ed, rotted-teeth, dry skin look of The Beach Bum. In fifth, the scars of war and secret identities in Shadow.

Every moment, from a hotel check-in to morning exercise to sneaking a cigarette, carries a greater significance in the ongoing conversation of culture and family. Certain tensions are left unexplained, characters drop in with no context - and yet we know! we get it! we are as simultaneously familiar and at sea as Billi. Family drama, personal responsibility, grief, laughter, life: The Farewell is a truly human experience, surprisingly haunting, frequently funny, and always...so damn good.

In second, Dolemite is My Name is uproarious, always true to its underdog tale. In third, Pain and Glory's auto-fiction constantly deepens ours and Salvador's understanding of himself. In fourth, Diane's slow burn reveals a lifetime of pain and self-recrimination. In fifth, Long Day's Journey Into Night upends time, mixes reality and dreams. 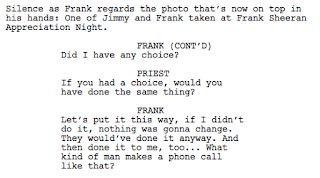 2. Little Women, 3. A Beautiful Day in the Neighborhood, 4. Shadow, 5. The Laundromat

For as often as filmmakers take on the task of condensing a lifetime into a feature film, there are few who scratch below the surface of Great Men and their Great Events. Zaillian digs deeper. He gets at the mob: the mundanity behind the men committing violence, their pettiness, their far-reaching grip on people and America. He gets at the personality of a blank slate of a man, a hired gun, whose family and admirable union work is overshadowed, even in his own mind, by a murderous sidejob that made him important. And he gets at the crawl of time, death's lingering shadow hanging over every moment.

In second, Little women makes an old, oft-told story into something new, fresh, modern - straight from the text. In third, A Beautiful Day in the Neighborhood faces the mess of life, embracing, accepting, and fixing it. In fourth, Shadow keeps careful track of every individual move in the power play of court politics. In fifth, The Laundromat laughs bitterly before ending on a gut-punch, never losing sight of the human costs.

From the get-go, Lin's Jian puts on a strong front, even if she seems a little shaken by the news of her mother-in-law's cancer diagnosis. While her husband fades into the background, smoking and drinking with his brother, Jian feels, to me, almost as much the center as Billi or Nai Nai, especially when sparring with relatives or going back-and-forth with Billi over how much they should be reacting. Lin's performance has the necessary steel, but also the tenderness, unexpected humor, and yes, unspoken fear, to make Jian human. Hers is, quite frankly, my favorite performance of the year.

In second, Randolph's Lady Reed is already beautiful and confident - but it's wonderful to see her see herself as a star. In third, O'Connell's Donna is more than a symbol of Diane's guilt. In fourth, Binoche's Dibs is single-minded, calmly possessed. In fifth, Chang's Kim Chung-sook is warier, more watchful than the others.

2. Eddie Murphy in Dolemite is My Name, 3. Robert De Niro in The Irishman, 4. Antonio Banderas in Pain and Glory, 5. Tom Hanks in A Beautiful Day in the Neighborhood

Two roles, two agendas, one incredible actor. As Commander Zi Yu, Deng is a man at the end of his rope, his isolation and pain from a self-treated wound driving him more mad, his fighting quick, instinctual - his behavior, feral. As the commander's shadow, Jingzhou, Deng is a good fighter in quiet pain, his stern visage hiding not just his loneliness and longing for home, but a watchful cunning that will serve him well; it also hides, not too well, his increasing affection for his master's wife. Two roles, often occupying the same shot, twice even fighting against each other, so distinct that you're often left to ask, "Is this really the same guy?"

In second, Murphy's Rudy Ray Moore is single-minded and unstoppable. In third, De Niro's Frank Sheeran knows where his loyalties lay - and is burdened by having to ultimately choose between them. In fourth, Banderas' Salvador Mallo is curious, depressed, lost, romantic, lovely. In fifth, Hanks' Fred Rogers sometimes flashes frustration behind the moral clarity.

Translucent screens covered in calligraphy and ink paintings against black stone palaces, living on dark waters between slate-grey mountains, the only bit of color being the brown wood of the floating platform, its yin-yang symbol a perfect match for the one hidden in the secret cavern where hides the master swordsman. Vibrant monochrome. 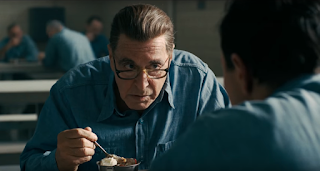 
Pacino doesn't look like Hoffa, he doesn't sound like Hoffa, and from what I can tell, doesn't quite act like him, either. That's fine; Pacino's not disappearing into the role, he's giving a star performance, and a damn good one at that. He's got the magnetism to lead, the charm to befriend a girl who doesn't trust anyone, and the sharp tongue of a man who's had to fight all his life. Pacino also sells the tragic stubbornness and lack of self-awareness that will eventually doom him. Ultimately, it's that chemistry with De Niro that shines brightest, that sells the heartbreaking moment when he glances off to the side, hesitates for a second...and gets in beside his friend.

In second, Sbaraglia's Federico Delgado contains an entire history in a single glance. In third, Flores' young Salvador both lays the groundwork for Banderas, and convincingly plays a fantasy of that reality. In fourth, McKinnon's Phil Remington is sidekick, conscience, and father figure. In fifth, Cooper's Jerry Vogel finally figures out how he wants to live...