1. A Star is Born - "The Man That Got Away"
music by Harold Arlen
lyrics by Ira Gershwin

James Mason as Norman Maine
A Star is Born

I've loved James Mason ever since I saw Lolita in high school, but nothing prepared me for a performance like this. Charming, tragic, sexy, messy, depressing, hopeful, romantic, manipulative - Mason gives you every aspect of Norman Maine, never forgetting his humanity, never forgetting how deep his love for Esther goes. There is a palpable magic between him and Garland, an all-too-rare kind of chemistry that launches this leaps beyond other versions of the story. And his face, frozen in horror as he lies in bed, hearing his wife go through turmoil because of him? Haunting! It's the performance of his career!

In second place, James Stewart in Rear Window - as the film's literal POV, it's his reactions to what he does and doesn't see/hear that ratchets up the tension. In third place, Dan O'Herlihy in The Adventures of Robinson Crusoe - perfectly pompous, strong of character, blind to many ironies. In fourth place, Emile Meyer in Riot on Cell Block 11 - the movie's conscience, believably torn between his responsibilities as a warden and his moral principles. In fifth place, Howard Keel in Seven Brides for Seven Brothers - hilarious, sexy, and what a voice! 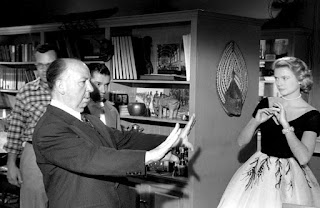 
I truly believe this is the film that best captures all his obsessions: voyeurism, audience shaming, beautiful blondes, paranoia, murder. Every itch gets scratched. And it's genuinely sexy, suspenseful...frightening! He's at the top of his game here.

In second place, George Cukor gets outstanding performances from a cast of heavyweights, never letting that gargantuan runtime or the musical numbers suffocate the humanity in A Star is Born. In third place, Max Ophüls' haunting imagery proves the perfect vision for Le Plaisir's mix of the merry and the melancholy. In fourth place, Luis Buñuel's deceptively straightforward take on The Adventures of Robinson Crusoe lets him slyly wink using the text. In fifth place, Elia Kazan combines brutality and sensitivity throughout On the Waterfront. 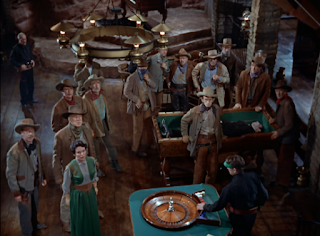 
O'Brien androgynous looks - Joan Crawford's the hero in pants, but there's something equally masculine, or at least not completely feminine, about Mercedes McCambridge's dresses - add an intriguing degree of queer to the film. Muted yet distinct colors, and not just for the women; the men are equally eye-catching. You don't really notice it at first, not all the way, but O'Brien's color palette and designs make for an exciting take on the western genre. 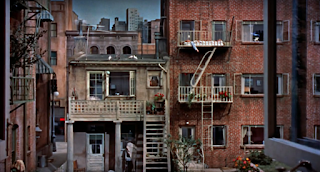 
The true star of the film, a view that must be specifically set for murder but feel real and lived-in. And it does, every part, right down to the brick apartment building bumping up against a duplex - is there any more definite sign of a city that's gone through phases and changes...and residents that've stayed through them all?

In second place, the cuckoo rock-and-wood layout of Vienna's in Johnny Guitar (James W. Sullivan / Edward G. Boyle / John McCarthy, Jr.,). In third place, the pre-steampunk steampunk of 20,000 Leagues Under the Sea (Harper Godd / John Meehan / Emile Kuri). In fourth place, the bootshops both established and neW, the parlor of Wealthy locals, and the local pub in Hobson's Choice (Wilfred Shingleton). In fifth place, the ornaments and refinements in boudoir and ballroom in The Earrings of Madame De... (Jean d'Eaubonne).


In this film, what Jeff hears is just as important as what he sees: the tinkling of a piano, the din of a radio, the barking of a dog - and a scream that shatters the night. The muddled sound of day, the sharp noise of night, and the way it can all fade into the background when we're focused on what's happening in our own homes - all perfectly recreated.

In second place, 20,000 Leagues Under the Sea (C.O. Slyfield / Robert O. Cook / James MacDonald) with its various alarums and muted undersea noises. In third, Riot in Cell Block 11 (Paul Schmutz, Sr.) makes sure you hear every lock that keeps the prisoners in their cells - and every punch they throw in revolt. In fourth, Seven Brides for Seven Brothers (Van Allen James / Douglas Shearer) keeps the music and the dialogue in perfect harmony. In fifth, On the Waterfront (James Shields / Richard Olson / Ernest Reichert / Evelyn Rutledge) sounds as raw as it looks.

On the Waterfront
Budd Schulberg


This is the story of a working-class bum who's just barely capable - like, in general - but manages to become a hero by taking a stand (and the stand LOL). The impact feels enormous, like the entire world has changed, even as you know it's just one piece of pier on the east coast. But neighborhoods - states - the world - are changed by those small triumphs. The ocean is, after all, a multitude of drops.

In second place, Creature from the Black Lagoon (Harry Essex / Arthur A. Ross / Maurice Zimm) manages a suspenseful creature feature with believable relationships, an intelligent leading lady, and discussions about science and capitalism. In third place, Riot in Cell Block 11 (Richard Collins), a thriller with a conscious that doesn't pull punches - with any side. In fourth place, Salt of the Earth (Michael Wilson), a careful account of a strike and its effects, an effective arc of the central character. In fifth place, Genevieve (William Rose), a disarmingly casual film perfectly capturing the frustrations and joys of coupled life. 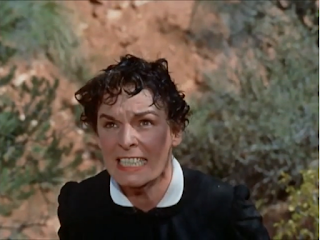 Mercedes McCambridge's brand of intensity is for me. She plays Emma Small like the woman is going to die of virginity, and the only thing keeping her going is the thought of spilt blood. She's no stone cold adversary; she's hot-blooded, passionate, full of feeling - that's the danger. A potent screen villain.

In second place, Pearl Bailey in Carmen Jones - carries off the film in her first number, dominates it completely with her subsequent ones. In third place, Kay Kendall in Genevieve - a hoot as a flavor-of-the-week gal pal with hidden talents. In fourth place, Madeleine Renaud in Le Plaisir - the sturdy anchor of the middle story, a madame of propriety. In fifth place, Nina Foch in Executive Suite - the very model of the trusty secretary.


Which brings us to the final category, Best Picture of the Year. If you recall, I posted a Top Ten, unranked, in alphabetical order, back in December. Of those ten, only five can be Best Picture nominees - bad news for....

10. On the Waterfront; 9. The Earrings of Madame De...; 8. The Adventures of Robinson Crusoe; 7. Creature from the Black Lagoon; 6. Johnny Guitar

Best Picture of the Year

5. 20,000 Leagues Under the Sea
produced by Walt Disney
A classic adventure story, effectively brought to the screen.

4. Seven Brides for Seven Brothers
produced by Jack Cummings
This is how you do a good, old-fashioned song-and-dance musical - with a lot of innocent naughtiness! 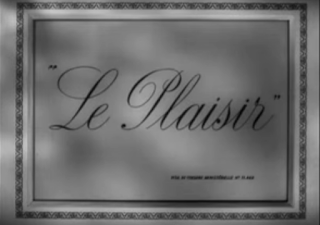 2. A Star is Born
produced by Sidney Luft
And this is how you do epic-scale intimacy, a star showcase, and a showbiz drama - all at once! 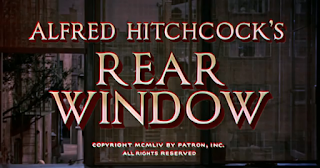