The Rest of the Gang

And here, besides the Oscar nominees, are all the other movies I watched: 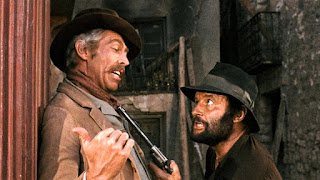 Duck, You Sucker!
dir: Sergio Leone
pr: Fulvio Morsella
scr: Luciano Vincenzoni & Sergio Donati & Sergio Leone, story by Sergio Leone & Sergio Donati, dialogue adaptation by Roberto De Leonardis & Carlo Tritto
cin: Giuseppe Ruzzolini
Mexican bandit Rod Steiger teams with IRA demolition expert James Coburn during the Mexican Revolutionary. Emboldened by his Hollmann Award wins for Once Upon a Time in the West, Leone delivers another three-hour western about brotherhood, loyalty, and desperation. This one has a crackerjack opening sequence, an incredible bridge scene at the halfway point, and great performances from the two leads. That said, it tends to drag in the middle. It's not that it misses any of its marks, it just takes a while getting there. A good one, just not my favorite of the director's work. 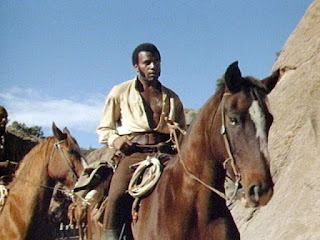 The Legend of Nigger Charley
dir: Martin Goldman
pr: Larry G. Spangler
scr: Martin Goldman / Larry G. Spangler, story by James Bellah
cin: Peter Eco
A western in three acts following the exploits of Charley, born a slave, promised freedom, forced to run and become a wandering dispenser of justice, never to be someone's property ever again. Filmed in a gorgeous golden tint (quality of print, despite restoration? or genius move by Goldman and Eco?). Unapologetic in its rough justice, unflinching in its depiction of injustice. As for the title: the film makes a point of Charley taking back the word, spitting it right back in his oppressors' faces. Star Fred Williamson certainly made a case for it, as did co-star Don Pedro Colley; the movie's writers are not Black, but they do, in the movie's opening titles, credit the scholarship of Black sociologist and historian C. Eric Lincoln, Ph.D., as their chief source and inspiration. It may have an exploitation title, but it is a serious, grown-up western.

Four Flies on Grey Velvet
dir: Dario Argento
pr: Salvatore Argento
scr: Dario Argento, story by Dario Argento & Luigi Cozzi & Mario Foglietti, dialogue by Giorgio Piferi
cin: Franco Di Giacomo
The second of Argento's Animal Trilogy, and quite possibly my favorite, despite not being nearly as well-plotted as The Bird with the Crystal Plumage. Memorable kills, an unhinged denouement, and ludicrous made-up science all make for a twisty good time, as American Michael Bryant searches for a psycho blackmailing him for...murder! Kooky in the best way.

Lake of Dracula
dir: Michio Yamamoto
pr: Fumio Tanaka
scr: Ei Ogawa / Masaru Takesue
cin: Rokurô Nishigaki
A young woman suspects a quiet lake town has vampires, and she's met them before. Though apparently not meant to be related to Dracula at all in the original Japanese, parallels abound: Akiko is Mina, Natsuko is Lucy, Kusaku is both Renfield and Wilbur from Abbott & Costello Meet Frankenstein, etc. The blue makeup of the monsters, the colors in the sets and backdrops, the bright red gore, the irresistible main trio: every frame is filled with beauty both impossible and horrible. I screamed, I swooned, I wanted it to go on forever, and when it ended, I immediately recommended it to friends. Watch this movie! 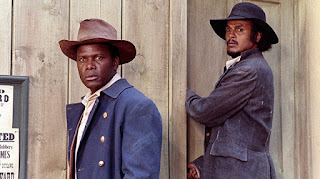 Buck and the Preacher
dir: Sidney Poitier
pr: Harry Belafonte / Joel Glickman / Sidney Poitier
scr: Ernest Kilroy, story by Ernest Kilroy and Drake Walker
cin: Alex Phillips, Jr.
Steeped in forgotten (buried?) history. Poitier is a guide for newly-freed Black families traveling west after the Civil War, Harry Belafonte as a tricky faux-preacher who'll seemingly do anything for money, and the white bounty hunters trying to force everyone to return to the South as sharecroppers. Seeing Poitier and Belafonte squaring off against and alongside each other is a blast, the former imbuing his usual taciturn demeanor with a dangerous quickness, the latter hiding his pinup good looks and watchfulness behind ratty clothes and rotted teeth. Poitier's directorial debut is confident, humorous, thrilling, as demonstrated in a shocking whorehouse shootout, a comedic bank heist, and the breathtaking finale. I'd never heard of this movie before I stumbled on it on Criterion Channel - why? It's masterful! 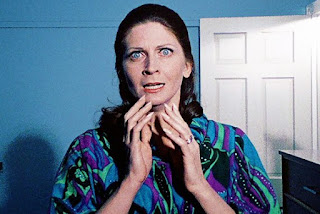 Season of the Witch
dir/scr/cin: George A. Romero
pr: Nancy M. Romero
Romero's thoughtful attempt to capture the ennui of 20th-century housewives and the era's feminist awakening. A sort of update of Kate Chopin's The Awakening, but without the depressing ending. Jan White is marvelous as the lead, who dreams that she is led on a leash by her husband, lusts after her daughter's new beau, and starts dabbling in witchcraft. Don't let that last part fool you - this is not a supernatural horror tale, but a psychological character study, punctuated by casual sexism and middle-class footsie with the forbidden. 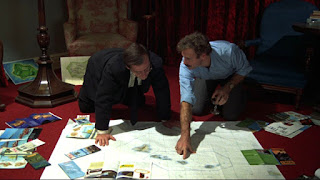 The King of Marvin Gardens
dir/pr: Bob Rafelson
scr: Bob Rafelson and Jacob Brackman, story by Jacob Brackman
cin: Laszlo Kovacs
Jack Nicholson delivers monologues on late-night radio. He's lured to Atlantic City by his slippery brother Bruce Dern, full of plans and promises never realized, but always managing to get people into his orbit. Dern's got dreams, but is always trying to scheme them into existence; his girlfriend Ellen Burstyn has bursts of hope but finds herself getting into a deeper despair. And Nicholson? Of all the movies I watched this year, there were only two in which I recognized parts of myself in any of the characters: Woodward in The Effect of Gamma Rays in Man-in-the-Moon Marigolds, and Nicholson in this. Burstyn's character describes him as a man who "changes his mind twice a night...He's got only one thing: depression, suspicion, and mistrust." Yes, but there are also times when he lights up just as much as Dern, when you see what they were like as boys - you witness the history of broken promises and disappointments, from both sides. 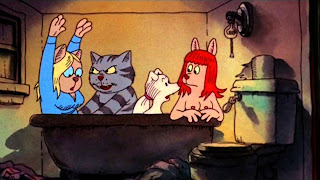 Fritz the Cat
dir/scr: Ralph Bakshi
pr: Steve Krantz
cin: Ted C. Bemiller / Gene Borghi
Bakshi's debut feature has all the hallmarks of his later (greater) stuff: an audio track that's a mix of scripted voice-over performances and real-life recorded conversations, sexual frankness, sardonic wit and grindhouse grit. Adapted from the underground R. Crumb comic, it feels more disdainful of its subject than I'm used to. The satire is blunt, some sequences go on longer than necessary, it's awfully dated - but gosh, when the visuals are really crackling, there's a dynamism, a promise of great things. 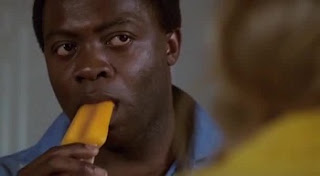 Bone
dir/pr/scr: Larry Cohen
cin: George J. Folsey
A Black man terrorizes a wealthy Beverly Hills couple...or tries to, anyway...in this cheeky nose-thumbing at class, racial tension, and sexual anxiety. Generally and specifically, we've seen these events in films before, whether they're exploitation efforts or studio-backed sociological handwringing. It's all played for dark laughs here, often uncomfortable, but never cheap, never punching down, just leaving the assholes exposed in the SoCal sun. What a journey! Amid the drinking, sex, grocery store pickups, car commercial spoofs, and sweat, nothing really prepares you for the destination - and that's thrilling! 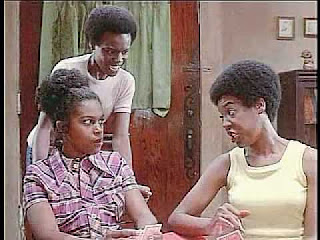 Black Girl
dir: Ossie Davis
pr: Lee Savin
scr: J.E. Franklin
cin: Glenwood J. Swanson
A family of women at odds with each other after years of disappointment and spite. The adopted, collegiate daughter Netta (actually the daughter of a mentally ill neighbor) is the favorite of Mama Rosie; Rosie's biological daughters are the spiteful Norma Faye and Ruth Ann, daughters of the long-absent Earl, and Billie Jean, a teenager ditching school so she can dance. Norma Faye and Ruth Ann keep Billie Jean down as much as they can, souring her on education, on pursuing her dreams, even on Netta, who's more encouraging and hopeful. It's a story of family resentment, of generational disappointment, each person passing their hurt down to the next generation. A strong ensemble, including A Raisin in the Sun's Claudia McNeil, To Kill a Mockingbird's Brock Peters, and, in her film debut, Tony winner Leslie Uggams. Some of the dialogue and blocking betray its stage origins, but overall, not a bad sit.
-----------
And that's the lot! A day of rest, then Sunday, we start looking at Academy Award nominees - starting with 1776, The Hot Rock and Documentary Feature contenders Malcolm X and Marjoe.
You May Also Enjoy:
ZergNet
Like us on Facebook
Posted by Walter L. Hollmann at 8:26 PM

Email ThisBlogThis!Share to TwitterShare to FacebookShare to Pinterest
Labels: 1972, Black Girl, Bone, Buck and the Preacher, Duck You Sucker, Four Flies on Grey Velvet, Fritz the Cat, Hungry Wives, Lake of Dracula, reviews, The King of Marvin Gardens, The Legend of Nigger Charley