Here it is, finally: my Top Ten Films of 1972! With apologies to Buck and the Preacher, Deliverance, Frogs, The King of Marvin Gardens, Malcolm X, Murmur of the Heart, and What's Up, Doc?.
Now, without further ado, in alphabetical order:

1776
dir: Peter H. Hunt
pr: Jack L. Warner
scr: Peter Stone
cin: Harry Stradling, Jr.
Friends were shocked - nay, horrified! - to discover that I'd never seen it before. So was I: I could have been in love with this movie longer? Much of what works worked on stage first: besides the obvious (the book, music and lyrics, all thoughtful in getting us through debates and historical information engagingly without short shrifting any of the actual arguments), almost the entire cast is lifted role for role from the original Broadway production; their comfort in their roles and with each other is obvious. You believe there is a long history among these men because there is history there. Too, the way the production emphasizes the importance of the ladies in the lives of their husbands and how they impacted history, despite there being only two, each with a song and scene apiece, is a gauntlet thrown at other "wife of" type writing: Abigail Adams isn't just home with the kids waiting for John to return, she's organizing, her letters to her husband full of wit and intellectual gamesmanship; Martha Jefferson isn't just an inspiration to her husband Thomas, she waxes poetic about his hi-diddle-diddling. Again, all stuff that originates on stage, and all expressively, memorably choreographed anew and beautifully shot in the film adaptation. The last pull-out! "Momma Look Sharp!" This movie!

A Bay of Blood
dir/cin: Mario Bava
pr: Giuseppe Zaccariello
scr: Mario Bava and Giuseppe Zaccariello and Filippo Ottoni, story by Dardano Sacchetti and Gianfranco Barberi, dialogue by Gene Luotto, collaboration with Laura Betti / Sergio Canevari / Franco Vanorio
Many murders, many motives. All of them are screamingly impossible and violent, but good Lord, that's what "many motives" gets you - different reasons, different methods, same fabulous results: delicious death, as Agatha Christie herself would say. A bizarre but too true realization of greed and its serving as the motivation for...well, everyone. 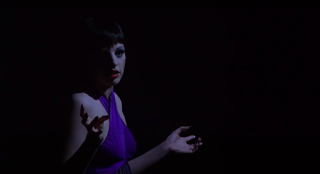 Cabaret
dir: Bob Fosse
pr: Cy Feuer
scr: Jay Presson Allen and Hugh Wheeler
cin: Geoffrey Unsworth
I believe I called this a perfect movie on my Twitter, it deserved every accolade it received at the time, and if it came out this year, it would retain its freshness, its sexiness, its edge. They never, before or since, made anything like Cabaret. That's all. 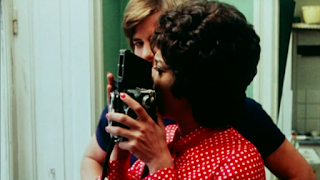 Georgia, Georgia
dir: Stig Björkman
pr: Jack Jordan
scr: Maya Angelou
cin: Andreas Bellis
There are a lot of films that I will probably rewatch more than Georgia, Georgia, but this one stuck with me in ways I can't quite articulate. I don't want to say it's plainly filmed and dully shot - after all, the only copy I could find was a YouTube upload of a VHS rip recorded from a rare television airing - but I know it's not the visuals selling me. It's not just the novelty of a screenplay by Maya Angelou, either, but of course, the writing is a huge part of it and brings up conversations that we still have to this day: the extent to which a celebrity must use their platform politically, the tension between Black and white in the United States, the stripping of a person's individuality once they become famous, reducing them to a symbol (a different one for different people). The actors, led by the great Diana Sands, rise to the material. Frank, romantic, funny, thought-provoking, it's a great, underseen work, ripe for rediscovery. 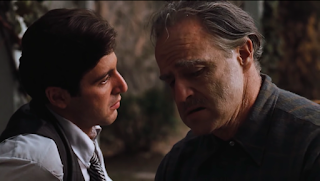 The Godfather
dir: Francis Ford Coppola
pr: Albert S. Ruddy
scr: Mario Puzo and Francis Ford Coppola
cin: Gordon Willis
Many imitators, even in its own terribly dull sequel two years later, but gosh heavens it's as classy and sublime as its reputation suggests - and the most quotable cinematic offering of its year. You may quote other films more, but society recognizes immediately "Leave the gun, take the cannolis" and "I'm gonna make him an offer he can't refuse" and "[whoever the fuck] sleeps with the fishes" and "on this, the day of my daughter's wedding." I'm not going to tell you it's a great movie, history has done that for me, AND YET I feel the need to remind you that history has done so for good reason! 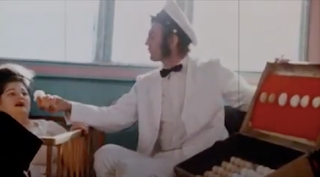 Pink Flamingos
dir/pr/scr/cin: John Waters
No one, anywhere, would ever conceive of this movie. They could conceive of the events, perhaps, but they certainly would not think of it as a movie, a narrative that strings singing assholes and chicks-with-dicks alongside class warfare (even if it is lower-class vs. lower-lower-class) and a dedication to family that echoes Meet Me in St. Louis. And if you think, "OH, it's all SHOCK THEATER, nothing more," that scene where Divine's family licks the furniture and it subsequently rejects Mink's household is ingenious, hilarious, unparalleled.

Prime Cut
dir: Michael Ritchie
pr: Joe Wizan
scr: Robert Dillon
cin: Gene Polito
When I watched Thieves' Highway in college, I remember being awed by the web of crime woven by apple-picking. An introduction to American economics, clearly, as Prime Cut continues the conversation into the meat trade, and as someone who has had beef, pork, chicken with every meal since...1994?...this was quite the eye-opener. Gene Hackman as big-time butcher Mary Ann, originally financed by the Chicago Irish mob, now set up as a farmland kingpin who can kill without consequence; Lee Marvin as the Irish mob fixer in town to get the accounts in order; me as the viewer gasping and shrieking at every turn. A bizarre cast of characters, from the devoted Irish driver to the slow-witted muscle of Weenie, who may partake in the exploitation and assault of the women in Mary Ann's trafficking scheme, but whose devotion to his brother is...hm. From the expected masculine action to the unexpected tenderness and respect to its female cast, a delightful surprise at every turn. 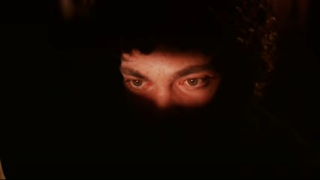 Private Parts
dir: Paul Bartel
pr: Gene Corman
scr: Philip Kearney & Les Rendelstein and Paul Bartel
cin: Andrew Davis
One of the most LA movies! A gal runs off to a distant relative's downtown hotel and meets a cavalcade of shady characters with diverse perversions: haven't all us transplants gone through this mind-bending introduction to the city, in one way or another? Its exploration of the sketchiness of both Downtown LA (they even use the real name of the King Edward Hotel, still in operation today!) and, briefly, MacArthur Park (in a memorable moment that has a rock concert happening alongside a cruising ground - still accurate!) expresses an affection for seediness that I, at least, found relatable. The finale calls to mind a Russ Meyer classic, an all-exclamation-points shocker! 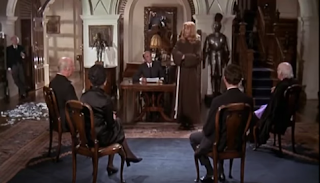 The Ruling Class
dir: Peter Medak
pr: Jules Buck / Jack Hawkins
scr: Peter Barnes
cin: Ken Hodges
First of all, honestly, is that score by John Cameron - whenever I see that title, I think of a slow dolly/zoom on a beatific Peter O'Toole as Cameron's holy arrangement gets into gear, the composer grooving as the actor recites nonsense. It's all of a piece with a work that...gosh, what's worse than cutting, disemboweling?...disembowels British society and its decaying mores. 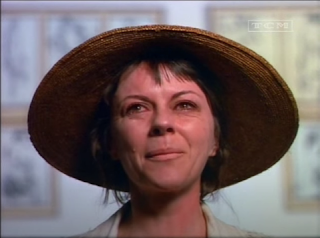 Savage Messiah
dir/pr: Ken Russell
scr: Christopher Logue
cin: Dick Bush
Ken Russell has time and again shown himself to be an artist who can depict artists as artists - not as audiences and studios would rather them, misunderstood, sometimes frustrating, but ultimately noble - no, these are annoying, sometimes appalling, ugly geniuses. This is the perfect simulacrum of such films of his: manic creatives encouraging and influencing each other, motivated often by sex and political beliefs but more so because it would drive them mad not to do it, passionate about everything yet easily bored. It's both inspiring and intimidating, beautifully designed by future filmmaker Derek Jarman, expertly performed by Dorothy Tutin and Scott Antony, and with a finale that really hits home why this artist is important, why this story matters.
Tomorrow, the nominees for the 1972 Retro Hollmann Awards.
You May Also Enjoy:
ZergNet
Like us on Facebook
Posted by Walter L. Hollmann at 3:54 PM