It's Spring now in 1946, and with the new season came the first nominee for Best Picture - Henry V. 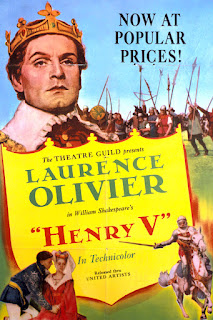 Produced in Britain in 1944 as a way to rally the fighting spirit of the UK, Henry V is Laurence Olivier's directorial debut, adapted from the Shakespeare play of the same name. For the uninitiated, it's the story of a once-frivolous prince who's now King of England and finds himself in conflict with France over that country's throne. The nations go to war, though the invading English are ridiculously, hilariously outnumbered, and don't stand a chance. Oh, ho-ho, so you think! This is the play from which come the lines "Once more unto the breach" and "We band of brothers" and "O God, thy arm was here," so it's a compelling drama about war, about overcoming odds, about the uncertainty of leadership.
Olivier's approach is a true adaptation. He opens at the Globe Theatre, with audience members laughing and talking throughout, actors going in late for cues, a thunderstorm interrupting proceedings, performers in obvious wigs and wardrobe acting on a bare stage. But as the narrative unfolds, the setting changes, becomes more cinematic - we see them land at the beach, we see the battle play out with horses thundering and spears impaling, we see Henry wander a campsite lit only by fires and the moon. This is not just a practical choice to give us spectacle where cinema demands, but an illustration of the transportive power of the Theatre, and that is a timeless thing.
Many European films did not receive a US release until after the War, for obvious reasons. And so Henry V came to our shores in 1946. IMDb puts its first American screening on April 3 in Boston, Variety's review ran April 24, the New York Times' June 16, and Manny Farber's review for The New Republic is dated July 8. Somewhere in there is its Oscar-qualifying date, surely. We'll discuss it more in two weeks' time, but we just wanted to note that it came out among these films: 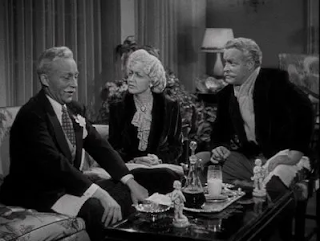 Road to Utopia
release date: March 22
nominee: Best Original Screenplay (Melvin Frank / Norman Panama)
Bob and Bing head to the Yukon in search of treasure. Their fourth (of seven) Road movie, my third, and probably the best of those three. The typical: gag-a-minute, jokes prioritized over narrative, fourth-wall breaking, some songs - oh, but what jokes, what songs! Good old-age makeup. If you don't like their style of showbiz, you may not like this, but I can't imagine having a sense of humor and not being into this. 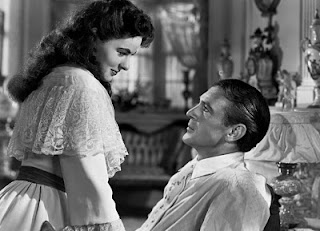 Saratoga Trunk
#5 film of 1946
release date: March 30
nominee: Best Supporting Actress (Flora Robson)
Ingrid Bergman is having a blast as a young woman who arrives in New Orleans to get a kind of social revenge on behalf of her excommunicated parents, teaming up with a Texas gambler to do so. Sardonic in tone, the constant double-crossing, societal nose-thumbings, and carnal purring are a hoot to watch play out. I also marveled at the grand sets and the leading lady's (purposely) ostentatious wardrobe. But...why put Flora Robson in blackface to play a Haitian maid? Even by 1946, such a thing was passé! Once again, an Edna Ferber adaptation about race almost gets it but just can't help tripping over itself. 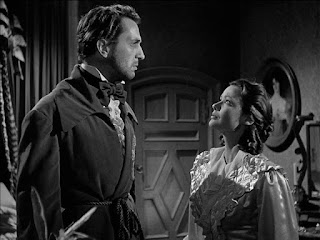 Dragonwyck
release date: April 19
Yet another tale of a young woman who winds up in the employ of a brooding wealthy man and ends up in a romance with him - ah, but there's also mystery to his brooding! Unlike the romanticism of Jane Eyre or Rebecca, the master of Dragonwyck is Vincent Price, who may be tall and handsome and attentive, but he's also a spoiled, psycho brat who believes in the absolute rule of the wealthy over the poor - "Hey," says Dragonwyck, "maybe those secretive wealthy assholes aren't to be trusted!" A Gothic romance and a labor drama, what with the conflict between Price and his farmer tenants. There's also an interesting tidbit about American history. All good things here, from score to sets to screenplay to performances (Price! Gene Tierney! Walter Huston! Spring Byington!). 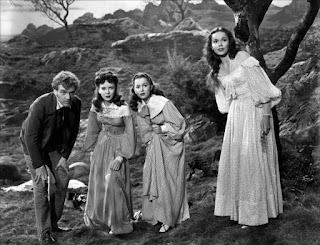 Devotion
release date: April 20
Speaking of Jane Eyre! Drama about the Brontë sisters firmly on the side of Emily great, Charlotte overrated, Anne forgettable, with unrequited romance for the first two. A great showcase for Ida Lupino as the observant, withdrawn Emily, whose dream sequences are suitably spooky and well-shot. The film is nearly stolen by Arthur Kennedy as chronically ill alcoholic brother Branwell - a star is born! 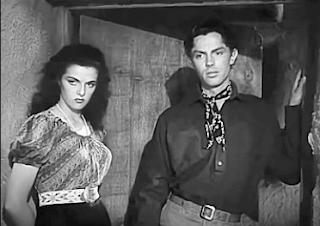 The Outlaw
#6 film of 1946
release date: April 23
Released in 1943, immediately withdrawn, and re-released three years later, this drama about the friendship and romantic rivalry between Billy the Kid and Doc Holliday is beautifully photographed, refreshingly frank about sex, and an absolute bore to watch. Victor Young's insistent score seems to be trying to make up for a talky, mostly uninteresting script, as well as directing and editing choices that stretch an 80-minute "story" to nearly two hours. Big box office thanks to those beautiful, beautiful stars - just look at that pic! 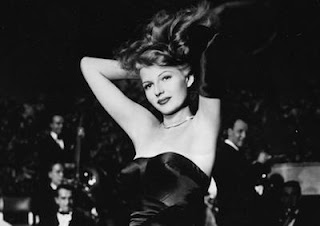 Gilda
release date: April 25
A guy winds up in South America and employed in an illegal casino by a mysterious German, whose titular wife happens to be very well-known to our guy. Not to anticipate the coming weeks, but Rita Hayworth's performance in this is the most drop-what-you're-doing-and-pay-attention performance of this year. The hairflip, the striptease, the mere looks she gives, her sneers and glances and smirks, my god, she wears Gilda like that strapless dress! Love the design of the nightclub set. Also love the strangeness of the story - it's forever evolving, always interlacing the intimate and the international - it's an erotic thriller, a conspiracy thriller, a psychological mind-fuck flick, even, at times, a romantic-comedy. There's something for everyone! 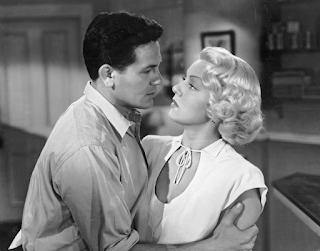 The Postman Always Rings Twice
release date: May 9
John Garfield is a drifter who gets a job with Cecil Kellaway and falls in lust with the boss's young wife Lana Turner. The lovers plot murder, but of course, that's just the beginning. Love a movie about dum-dums trying to outsmart, well, anyone. Funnier than I expected: almost plays as farce, particularly in the scenes where Garfield and Turner try to execute their plans. Runs out of steam by the end, but there's no denying the electricity between Garfield and Turner (terrific in this, by the way). Hume Cronyn best in show as a wily lawyer. 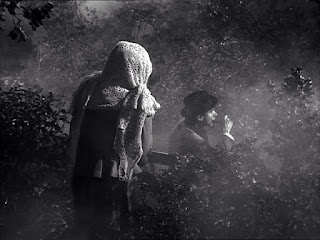 She-Wolf of London
release date: May 17
Mysterious attacks in London are blamed on a werewolf; meanwhile, a young woman can't account for her whereabouts at night and fears an ancient family curse is to blame... A little bit horror, a little bit spooky-house mystery, it all goes down easy and entertainingly. Some of the murder scenes really are gruesome, thanks to sound design, performances, and makeup - the throat gash in one shot had me exclaiming at the TV! No one does it like Universal, golly. 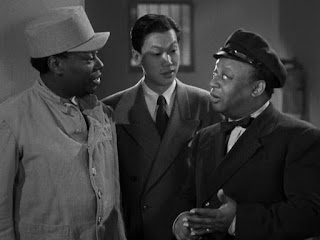 Dark Alibi
release date: May 25
Was about to call this the better Charlie Chan but realized I do not remember a single thing about it. Oh, except Mantan Moreland as Charlie Chan's chauffeur getting caught in a prop house for, like, five minutes' worth of gags and jump-scares. I'd look it up, but honestly, these Monogram Chan flicks are the pits! 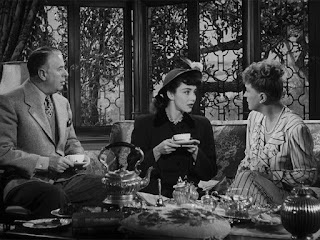 Cluny Brown
release date: June 2
Ernst Lubitsch's final film has Jennifer Jones as the titular eccentric who trips her way into becoming a domestic on a wealthy estate in the countryside, Charles Boyer as a refugee, and an ensemble of pseudo-intellectuals and high society snobs. This is my sixth Jennifer Jones film (including Duel in the Sun, to be discussed later) and, friends, it's not looking good for her; here, she anticipates Maggie McNamara's alien performance in The Moon is Blue, though McNamara was at least a credible weirdo. Otherwise, though, good stuff: the laughs come at the right place, Boyer's a charmer, it moves. Trust Lubitsch to make a good movie! 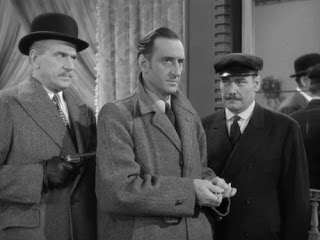 Dressed to Kill
release date: June 7
Sherlock Holmes is on the trail of a collection of music boxes leaving a trail of bodies in their wake! Yes, you read that right, and what an adventure is to be had by all! The final Holmes film starring Basil Rathbone and Nigel Bruce; they go out on a high note. 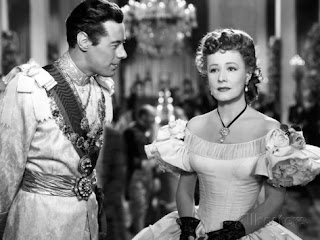 Anna and the King of Siam
release date: June 20
winner: Best Cinematography - Black-and-White (Arthur C. Miller), Best Art Direction - Black-and-White
nominee: Best Supporting Actress (Gale Sondergaard), Best Screenplay (Sally Benson / Talbot Jennings), Best Score (Bernard Herrmann)
If you know The King and I, you know this story: English governess comes into the employ of the King of Siam, becomes influential at court, butts heads with the King but also a hint of romantic tension? Irene Dunne is Anna: she is perfect. Rex Harrison is the King: if we can set aside the outdated use of yellowface and the odd accent he uses - which, I admit, is setting aside a lot - it's not a bad performance at all, though it's no Yul Brynner. Makes a real attempt to wrestle with the cultural differences, especially the infantilization both parties assume over each other. Sondergaard gets an incredible monologue about motherhood and royal traditions and The System. Overall, I found it more effective than The King and I. 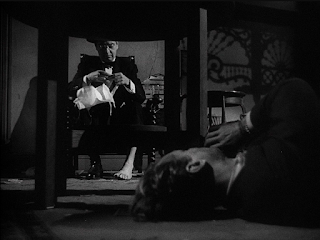 The Blue Dahlia
release date: July 4
nominee: Best Original Screenplay (Raymond Chandler)
Guy returns from War to find his wife has become a roundheel, the kept woman of a thug and club owner; when she's found with a bullet in her, guess who becomes the chief suspect? The one punch it pulls was mandated by the government itself, but even that leads to a twist that is strangely satisfying, still in conversation with the sudden itchiness of post-War America. It's tough stuff, but it doesn't seem bilious or even hopeless so much as...lost. A very sad movie, I think.
Tomorrow, twin Bette Davises, the ghost of Lou Costello, Bogey & Bacall, and more...
You May Also Enjoy:
ZergNet
Like us on Facebook
Posted by Walter L. Hollmann at 3:00 PM