A looooong time ago, I allowed readers on my livejournal page to recommend books, plays, movies, etc., to me as possible subjects for future Casting Coups. Well, three--count them--THREE people requested live action casting coups of Disney Animated movies. Amanda suggested it, Becca seconded it (though she specified a very different film from this one), and Raye gave a late but enthusiastic concurment.

There are a large number of Disney movies out there, many of which are based on books and fairy tales. Fairy tales, of course, come in all shapes and sizes, all colors and creeds, all languages and dialects. There's the Egyptian Cinderella (old fairy tale), the Dutch Little Mermaid (original source), and the Native American Snow White (HBO revisionist telling). I looked up various Wikipedia articles, trying to find the most traditional telling of the most popular tales.

Then I realized how stupid that was and cast the damn movies themselves.

But still, which ones do I actually present? My favorite Disney flick is The Hunchback of Notre-Dame, but a casting coup for that is better suited to the original, fleshed-out ensemble piece that is Victor Hugo's novel. Mulan is a damn good one, but it's very recent; besides, there's already a live-action version in the works. On to the princesses, then. Aladdin--no, I do not know of many Middle Eastern actors, and it's better to steer clear than to give offense. The Little Mermaid would be fun, but it's underwater. Beauty and the Beast...hm...I'll give it some thought. And, of course, Snow White and Cinderella have been done to death.

And then I remembered what my second favorite Disney film of all time was. And who my favorite Disney character is. And the Disney princess I most want to take to dinner.
KING HUBERT
Who is He: Hubert is the portly king of the Neighboring Kingdom, the father of Prince Philip. He is rather optimistic, and enjoys fine wine (lots of it) and big-ass turkey legs. When the going gets trivial, Hubert is willing to fight it out, but only with non-deadly weapons like fish.

My Choice: This is the least-known face in the bunch, at least over here. But this fine actor has proved to me, in various Mystery! programs and a drag queen comedy, that he is the modern equivalent to King Hubert.


KING STEFAN
Who is He: The king of the Fair Kingdom, Stefan finds himself blessed with the birth of his daughter and cursed with her sixteen-year absence. He wishes for Aurora's safe return, and for her to marry Philip, but he certainly has more than a few doubts. Having known Maleficent for some time, he is not as optimistic as Hubert.

By the way, here's King Stefan:

And here's St. King Stefan of Decani, of the Serbian Orthodox Church My Choice: I have an image here. The Neighboring Kingdom is England, and the Fair Kingdom is America. You know, the place with the hotter chicks. Naturally, the king will be American, and look great with a beard.


THE FAIRIES
Who Are They: Three magical spinsters who hide Aurora away as Briar Rose in a peasant's cabin in the woods. Flora, the leader, is older, wiser, redder, and practical. She grants Aurora beauty. Fauna, the thin one, is bright and bubbly and a little ditzy. She grants Aurora a beautiful voice. Merryweather, the fat one, is hot-tempered, and also knows what looks best on the Princess. She grants Aurora the chance to sleep rather than die from Maleficent's evil magic. I bet if that curse hadn't come along, she would've granted the girl some (Metaphorical) balls. The chick sleeps through half the flick. Originally voiced by: (l to r) Verna Felton (Queen of Hearts in Alice, Wilma's mom on The Flintstones), comedienne Barbara Jo Allen (The Women, The Opposite Sex), Barbara Luddy (Kanga, the titular Lady from Lady and the Tramp)

My Choices: To go along with this theme I have in mind, I've chosen three representatives from three different countries. Flora will be played by an American:

Fauna will be played by a Canadian:

Merryweather will be played by a Brit:

Comedienne Dawn French (TV's The Vicar of Dibley, The Chronicles of Narnia: The Lion, the Witch, and the Wardrobe)


PRINCE PHILIP
Who is He: The fuckingest Disney prince ever. Philip sings, rides horses, dresses like a cardinal (my favorite bird), woos women by using their own words, trolls the woods looking for booty, and plunges swords into dragon witches. DRAGON. WITCHES. Originally voiced by: Bill Shirley, who dubbed Jeremy Brett in My Fair Lady, which means that his voice you heard yesterday singing "On the Street Where You Live". Also, David Beckham payed Philip in the Disney Dreams ad, and David Beckham is fucking a Spice Girl. Philip. Fucking. Rocks.

My Choice: I've seen him do hero: job well done. And he looks like a Philip, a dashing ladies' man, man's man, and man about town.


MALEFICENT
Who is She: An evil fairy who lives atop her gloomy castle atop a gloomy mountain, where her gloomy crow (or raven?) orders her gloomy trolls to do her bidding. She can also turn into a dragon. She curses Aurora to prick her finger on a spinning wheel on her 16th birthday...AND DIE! Why? Well, to be honest, it's because she didn't get an invitation to the party. Seriously. Maleficent is one bitch you don't want to fuck with.

My Choice: One kingdom is British, the other American. The fairies represent good Anglo-Saxon blood: British, American, and Canadian. Yet, though the Canadians share a continent with us, and were a British colony, there is another language they speak: French! And to balance it all out, a wonderful French actress who can bring on both the doom and the sex! 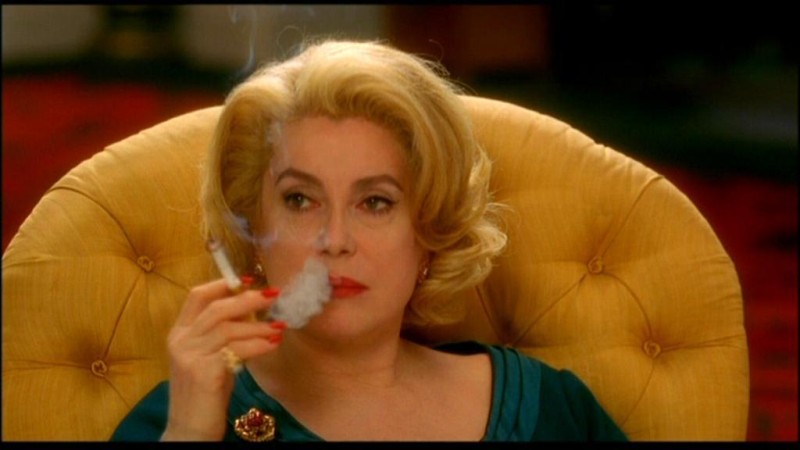 
AURORA/BRIAR ROSE
Who is She: Sleeping Beauty. Cursed as a child, she is raised as Briar Rose by the three fairies in a peasant's hut in the woods. Unaware of who he is, she falls in love with Philip (the very man to whom she is betrothed!). She pricks her finger on the damn wheel and slips into a coma. Philip awakens her with true love's first kiss. She also happens to be a first-class Hottie.

My Choice: I wanted to go with an American beauty who could pass for sixteen. Blonde, preferably, since for many, that is the image of perfect beauty. And someone who would look damn good whether she was decked out or scrubbin' it.

Is all well? Or does one of these choices unsettle you in some way? Write. Respond. Play.
Posted by Walter L. Hollmann at 2:24 PM

You forgot to mention that Maleficent is by far the best female villain Disney has or will ever develop.