With all this hoopla concerning My Fair Lady: Fair Harder (mostly from you, Jenn), I think it's time we do a little discussion about all this. All this....casting. But it's not a casting coup. This is an open discussion in which we bounce ideas off of one another.

For instance, the casting of Keira Knightley. Quite daring, really. I mean, who would ever have thought to replace this: My issue with this is that it's too obvious. Casting Keira Knightley or Natalie Portman or Jennifer Love Hewitt in an Audrey role just smacks of safety. That's part of the reason why I needed Maggie Grace as my Holly Golightly. She's a buxom blonde, and does not immediately call to mind the original. The audience subconsciously remains unbiased. You immediately expect something different.

So, who would I have chosen? It's a tough decision. I'd like a brunette in the role, just not a waif. Maybe Martine McCutcheon: who played the role in London's West End, and won the Olivier for it:

On the other hand, I think Eliza's supposed to be younger than Martine's 32 years. Still, she doesn't look it, and she played the role onstage. Of course, film is a different medium, with close-ups and the like. On the other hand, Audrey was 33 when the original was released. Hm.

Moot point, though. Keira's a done deal. But who would you like to see cast in the role?


Continue for the rest of the cast...
The problem is, the original had such a perfect group of actors. Stanley Holloway and Rex Harrison reprised their Broadway roles of Alfred Doolittle and Henry Higgins. Wilfrid Hyde-White was an excellent Colonel Pickering, one that absolutely stole my heart when I first saw it. (As I get older, of course, I identify more and more with Higgins) Jeremy Brett, later Sherlock Holmes, was that excellent quasi-love interest, while Gladys Cooper actually managed to steal scenes from Rex Fucking Harrison as his mother.

Who in the world could possibly compete with these phenomenal actors? Who would dare try the role on for size, in a non-dubbed version with both stars and up-and-comers?

Me, I prefer to see films with an all-star cast and only one or two unknowns. This does two things: guarantees a great marquee, and allows a newcomer to cut his or teeth with some actual human beings. However, since Eliza is (once again) being cast for star appeal, that leaves only one other character who can be played by a newcomer:

Freddy Eynsford-Hill. Freddy meets Eliza outside Covent Garden, when she's still a flower girl. But, you know, she's a flower girl, so he doesn't notice her. He next meets her at Ascot, and is completely smitten by her. He gets to sing one of the loveliest songs ever written by anyone:

So, yes, I say an unknown. Or, how about a dashing British actor who we already know is a passable singer (I think, at least)?

The only thing is, for me at least, this song has to be effing beautiful. This actor was dubbed. And it's wonderful, and he sells it. Still, I'd love to a boyish Christian Bale wearing that hat. Or an unknown.

It was mentioned before that Michael Caine could play Henry Higgins. To which I reply: nnggh. I love Michael Caine, everyone knows that. He's my favorite living actor. But alas, he's far too old and far too Cockney to play Henry Higgins. One can interpret the Eliza-Higgins relationship as either paternal or romantic. It could go either way. With Michael Caine, what you have here is an old man lusting after a bright young thing. And also, he's Cockney. Far too rough to play a role like Higgins.

On the other hand, he may be suitable for the role of Eliza's chimney-sweep father, Alfred P. Doolittle, who pays Higgins to keep the girl away from him. I ask you to picture Michael Caine singing an ode to laziness:

You see, Higgins need to be within the twenty-year age difference. Freddy needs to be within the fifteen-year age difference. The other characters: who cares? Twenty to forty years, I believe, is most appropriate. The only other rule of thumb is that Higgins' mother must be played by an actress who is, at least, fifteen to twenty years older than the man playing Higgins. Or, once again, she must at least look like she is.

Example: Footloose. In the movie, hot babe Lori Singer plays Ariel, the sixteen-year-old daughter of plain preacher's wife Vi, played by Dianne Wiest. And it looks passable. But did you know there's only a seven-year difference between the two? Incroyable!

Such is the case with Mrs. Higgins. Someone who can pass as much, much older than most of the cast. Maybe not Pickering, but the rest.

This gives us a number of choices. A heavily made-up Julie Walters?

Or a most-in-need-of-a-career-resurgence Joan Plowright?

Myself, I'm in the Plowright camp, though surely some consideration for Miss Marples wouldn't do any harm, like Angela Lansbury or Geraldine McEwan or Julia McKenzie. 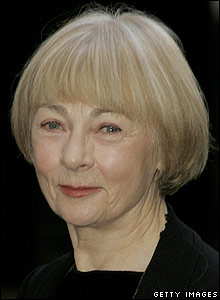 That leaves us with two characters left, and anyone could play either part. Colonel Pickering, for instance, is older and wiser than Higgins, more in touch with people's feelings. Yet he can be just as playfully mischievous. He can be tall, he can be short. He can elderly, he can be middle-aged. Literally anyone who can do a British accent could play this role. Give Hugh Grant some makeup, and BOOM there you have it.

In all serious, though, there are a number of people who could play Col. Pickering. First in my mind is the great Christopher Lee, who needs to be seen outside a horror/fantasy/sci-fi flick and show off his musical talents.

Then there's Leslie Phillips, the Hollmann Nominee for Best Supporting Actor in 2006 for the film Venus. The star of that film, of course, was Peter O'Toole, who played Higgins in a TV version of Pygmalion, the straight play upon which My Fair Lady is based. He was also the studio's choice for the original film. Still, Leslie Phillips:

Not Ian McKellen, though. Too much star power for this part. You know who'd also be cool, though? Vincent Price. But he's dead, so I guess that leaves him out of it. Maybe Derek Jacobi or James Cromwell or Donald Sutherland or Michael Gambon. They'd all be great for the role. And that just leaves us with one person. The greatest role ever written for a musical. Henry Higgins.

Like I said, Higgins should be in that twenty-year range with Eliza. For Keira Knightley, this means someone in their forties, though maybe fifty-five would be a good stop. For Martine McCutcheon, this means closer to fifty-three, maybe sixty as a stopping point. No, strike that. Fifty-five. Period. Come to that, maybe keep the age range at forty-five to fifty-five years old. Now you got something.

Ben suggested Colin Firth, who will supposedly show off his musical abilities in Mamma Mia! this summer. Colin is forty-eight years old and can play father and lover with equal ease. Perhaps, though, he's too dashing to play Higgins. Could we believe him saying: "I'd prefer a new additon/To the Spanish Inquisition/Than to ever let a woman in my life"? Hm.

Still, that's more believable than one of my suggestions: Colin's co-star, Pierce Brosnan.

Yeah, right. Stupid me. Brosnan will eternally resemble the jerk-off friend of yours whose company you retain despite the fact that he's been with every girl you've ever had a crush on. Look at him. Can you please stop eye-fucking the room, Pierce?

As for men that push the limit, there's a 64-year-old Welshman and a 57-year-old Australian that would be great for the part:

Though Rush's Australian accent may be a distraction. Perhaps we would do better with an actual Englishman.

Yes, an Englishman who is handsome.

One who could believably keep women away, yet still fall for Keira Knightley.

One who can sing, who has already done a Hollywood musical.

One who is fifty-five years old, exactly.

I have your man, remake-makers.

I think Jeremy Northam would make a splendid Henry Higgins.