Casting Coup: A Key to the Suite

Bear with me here. I know most of you probably have not read this, since it seems to be one of those hard-to-find-yet-not-out-of-print books, but it will not leave me. It haunts my dreams. It floats about in my subconscious. It interrupts my thoughts. According to those in the know, it is very true to life.

John D. MacDonald, creator of Travis McGee and author of Condominium and Cry Hard, Cry Fast took on the business world in his 1962 opus, A Key to the Suite. Set in a South Florida hotel, Suite reveals the inner workings of a business convention--the double dealing, the backstabbing, the adultery, the sin. It's very delicious.

Several things happen during Suite, but the central plotline focuses on the axeman, Floyd Hubbard, sent to evaluate and (probably) fire old-school salesman Jesse Mulaney. Mulaney's pal Fred Frick, who runs their business's set-up at the convention, comes up with an underhanded scheme to stop Hubbard. They've prepared for everything--except unpredictability.

MacDonald has this wonderful ability of writing pulp with substance. His books are barely 200 pages long, the dialogue consists of words like "baby", "sweetheart", and "lover", thrown around higgledy-piggledy, and there's aways a fair amount of sex and violence. Yet there is something much, much deeper going on. In illustrating the amorality of modern American business, MacDonald offers a comment on the human condition. We are all capable of cruelty, of betrayal, of being able to lie without guilt. And yes, while this may seem obvious to a lot of us, MacDonald's execution is both horrifying and real, a mirror that reflects our own misshapen inner images.

Out of everything I've cat thus far, this is one of those. This is the real deal. This is my movie.

ALAN AMORY
Who is He: Director of Public Relations for the Sultana Hotel. A former tenor and an ex-agent, Amory knows all the ins and outs of every business. He knows everybody who checks in, what clubs are accessible, and which girls to beware of. Snappy dresser, too. 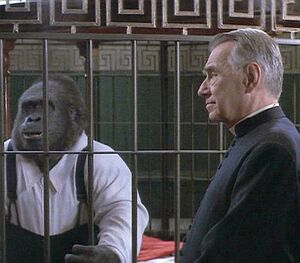 
CORY BARLUND
Who is She: A call girl, a high-priced hooker whose almost through with the business. In her thirties, but tries to look and act younger. She's run off plenty of times, but she always comes back to work. This time, she insists it's different. Posing as a reporter, she's hired by Fred Frick to set up Floyd Hubbard. But something goes wrong...


ALMA BENDER
Who is She: Cory's boss, a slick madam who feels a little rundown herself. She used to have a thing with Jesse, but that's all past.

My Choice: Academy Award Nominee for Tommy and Carnal Knowledge


CAPTAIN BREWHANE
Who is He: A cop who is always on call, especially when the Sultana needs some help.


JOHN CAMPLIN
Who is He: The new executive vice president of the American General Machine Division, of GAE, the company that recently merged with AGM. He's the man calling the shots for Hubbard. He wants to see if Hubbard has it in him to cold-bloodedly kill a man's career. It's all a test--Mulaney is out no matter what. Camplin is cold, unemotional, and all to aware of how fickle the business can be.


HONEY CONSTANTO
Who is She: One of the showgirls acting as spokespersons for GAE/AGM. She's got little going for her but her looks, but she's a damned good salesgirl.


DAVID DANIELS
Who is He: One of the AGM employees at the convention. His brawny build belies his intelligence, though he has a drinking problem. Believes no woman could his resist what he has to offer; when Cory does, he sets his sights on her.


ALAN FARRIER
Who is He: A cop under Brewhane's jurisdiction who sometimes does favors for Frick. This time, it's taking care of an employee who's gone off the deep end.


BOBBY FAYHOUSER
Who is He: One of the new guys, a young man who's training by way of fetching drinks and taking care of the drunks. Too cynical, though he may be the wisest of them all.

Nate Torrence (Get Smart, Studio 60 on the Sunset Strip)


FRED FRICK
Who is He: Assistant District Supervisor of this branch of AGM, he's good friends Jesse Mulaney. Ruthless and amoral, Frick hires a prostitute to seduce the married Hubbard, thereby discrediting him and causing his resignation. At least, so he hopes.


FLOYD HUBBARD
Who is He: The axeman. A scientist by education and trade, he was hired as an engineer when GAE acquired AGM. A happily married man, he's in charge of evaluating Jesse Mulaney at the convention, hammering that last nail into the coffin. But then he meets Cory, and this boyish husband is suddenly tempted by desire.


CONNIE MULANEY
Who is She: Jesse's wife. Completely devoted to her husband, she is not entirely blind to his faults. She likes Floyd, and even tries to stop him from losing himself in all the goings-on at the convention. Probably the only sympathetic character, though she shouldn't drink too much.

My Choice: Academy Award Nominee for Pieces of April


JESSE MULANEY
Who is He: A great salesman, president of NAPATAN (of which GAE/AGM is a part of), one of the old-school. But because he's old-school, the new bosses consider him more of a detriment than an asset. Unused to the way things are done nowadays, Mulaney goes to Fred for help, but balks at the idea of setting up Hubbard with Cory. Nevertheless, he gives the go-ahead, and sets off a chain of events that spirals out of control.

My Choice: Academy Award Nominee for Michael Clayton and In the Bedroom

Hand to God, I really want to make this. Script away!
Posted by Walter L. Hollmann at 12:22 PM