Thank God Oscar season is over. I look forward to it all year, but it's nice when I can turn my attention back to films now playing, or to movies I've never seen before. It feels good. 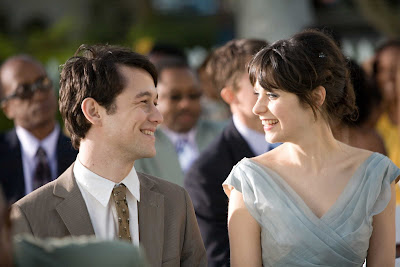 Lord, what a movie. I saw this at a special screening where I got to meet the director. But even without meeting him, I had already decided: this is one of the best romantic-comedies I have ever seen. Much like Annie Hall, it's a non-linear look at a relationship: the beginning, the end, the good times, the horrible times, and everything in between. Joseph Gordon-Levitt plays the romantic, Tom, who works at a greeting card company, believing in True Love, Fate, and the Land of Meant-to-Be. Zooey Deschanel is the titular Summer, enigmatic and beautiful, who does not believe in any of those things, but believes that one just goes through life, has romances, and la-di-da. Tom sees Summer, realizes that she is the One, and we've got our movie.

The movie is damn near perfect. It's a familiar situation, a familiar plotline, but it feels so unique and fresh. The soundtrack is incredible, featuring The Smiths, Regina Spektor, Simon & Garfunkel, Patrick Swayze, and a host of others that I adore. Everyone has been the Tom in a relationship, convinced they have found their Perfect Match, painting themselves as the wronged one when the relationship goes sour -- but I love how the screenplay does not entirely absolve him of any blame. It's a believably-written piece with some great fantasy sequences (the Morning After dance is spot-on). Deschanel is appropriately ethereal, and we get to know just enough about her to see why Tom falls in love. But this is Gordon-Levitt's film, all the way, and hopefully this will introduce him to a broader audience.

500 Days of Summer comes out in limited release July 17.

I like Henry Selick. I've only seen James and the Giant Peach and The Nightmare before Christmas, but I adore what vision and imagination he displays. Coraline is no different. Based on a story by Neil Gaiman, the film tells how a bored little girl (Dakota Fanning) discovers an alternate version of her home, where her parents are less neglectful, candy is everywhere, cats talk, and her oddball neighbors entertain her just for the sake of it. Of course, this other world has a sinister side, and Coraline is eventually put into a position where she must stop it. 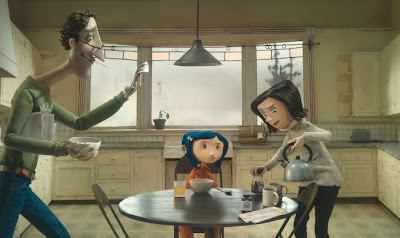 Selick once said that he makes kids' movies for brave children. And you would have to be for Coraline. If ever there was a man who so perfectly captures the terror that comes when the familiar becomes strange, it's Henry Selick. The Other Mother (Teri Hatcher) must be one of the most frightening screen villains I've seen; I can only imagine the trauma that comes with the 3D version. The music by Bruno Coulais is beautiful, and there's a short song by They Might Be Giants that's pretty catchy. The voice actors serve their characters well here, especially Keith David as the Cat -- his soft purr is perfect (I know, I know).

All told, it's an effective film. I wish we had gotten to know more about some of the characters. Many are one-scene wonders that are only seen again through their more Satanic "other" images, and one character was mentioned throughout, but only shows up at the end in an unspectacular fashion, almost as though Selick forgot to put them in. A shame, really, since you're waiting for the character, and you never get to know them. But as a kid's movie, it works magnificently. It's no Monster House, but it's scary and entertaining. 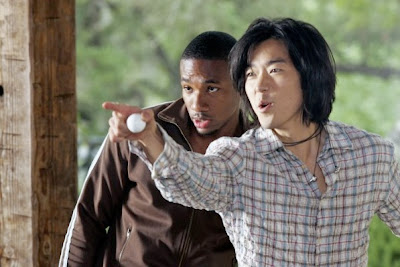 These two are worth the price of admission. Not Jason. Not the most misogynistic portrayals of women I've ever seen (and I LOVE slasher films). Not even the death scenes, which, other than the one arrow scene, are pretty dull. Aaron Yoo and Arlen Escarpeta decide to have a little fun with these horribly written characters. It's a shame they took the job: Chewie (Yoo) and Lawrence (Escarpeta) are the only minorities. They are written as pathetic stoner losers who never get laid, and never will. Their bromance, though, is the most sincere element of this film.

It starts out strongly. Fifteen minutes go by, and you realize you just sat through a pre-credits sequence. There's one excellent death there. Plus a sex scene in a tent. I don't know, though, the rest of the movie was horrible. Laughable. Is it too much to expect actual terror and suspense and, you know, HORROR from a horror movie? God, i don't even remember there being any jump scares. There was just nothing there. So many random characters are introduced, built up, then forgotten about. The ending is non-sensical and annoying. The editing and cinematography distract from the story, and you can barely tell where anyone is relative to Jason. Pathetic.

But there were these two. And Trent. Trent is the heroine's douchebag boyfriend, played by Travis Van Winkle. You may remember him from Transformers, also produced by Michael Bay, wherein he played the heroine's douchebag boyfriend...named Trent. It's the same character. It is literally the same character. But he has the single greatest line I've ever heard in a sex scene.

You know, I liked this movie. I didn't love it. There were definitely some parts that I hated (Nixon scenes). There were parts that I thought were perfect (everything Rorschach). I do feel Zack Snyder raised the bar. It's a ballsy adaptation, one that is both obsessively faithful and daringly distant from the work. The ending is changed, and I think this raises the stakes and enriches the characters. The slo-mo, speed-up effects did not bother me at all. They were different, they were awesome, they let me see every detail. It worked for the film.

Look, it's a difficult work to adapt, but Snyder and screenwriters Alex Tse and David Hayter did a good job. Ozymandias (Matthew Goode) does suffer the most -- his character is poorly-developed, and try as he might, Goode just can't raise this character beyond old-school Bond territory. Laurie/Silk Spectre (Malik Akerman) is less whiny than I recall, but Akerman seems lost. Some of her scenes are excellent, many are just annoying. In fact, I say "NO" to the women in the film as a whole. They are neither well-played, nor well-developed. The only female role that caught my attention was Silhouette (Appolonia Vanova), the lesbian hero who only appears in the opening credits, but Lord to what effect!

Again, though, there's much to admire. The men, as a whole, do fantastic work here. It's almost as though the characters were first written with them in mind, all the way back in the 1980s. Patrick Wilson, Billy Crudup, Stephen McHattie, and especially Jackie Earle Haley and Jeffrey Dean Morgan are first-rate. True, there are things I did not entirely care for in these roles -- Dr. Manhattan's backstory bored me, whereas Nite Owl gets one of the worst moments of the film -- but these are hardly due to the actors. These are truly great performances of complicated characters.

I would like to see it again. Midnight showings of three-hour films do not a clear mind make. Though, on that note, some advice to filmmakers. If your film is over two and a half hours, never include the line, "It will never end." Come on. You're just begging for criticism.
Posted by Walter L. Hollmann at 3:40 PM

I still want to see The Watchmen. It's our book club's next read!! But of course, I will not watch the movie and try to pass it off as reading the graphic novel.

Patrick Swayze in a soundtrack that is NOT Dirty Dancing? I want to buy it on that alone!!

No matter how bad Friday the 13th may be, it has to be better than the suckfest that was My Bloddy Valentine. If it hadn't been in 3-D, I would have stayed in my seat, asleep.