Back-to-back Silliness was the order of the day yesterday. A midnight showing of The Sorceror's Apprentice followed by a 9:45pm showing of Salt assured me that Sunday was going to be ridiculous, but at least enjoyably so. Is my forehead bruised from the many times I smacked it? Possibly. Did I have a great time? Oh, honey. You don't even know.

The Sorceror's Apprentice begins silly. It ends silly. Throughout the entirety of its 111 min. running time (wait...really? that long?), it never stops being silly. This is a movie that's proud to wear its silliness on its sleeve, and not for one moment is there a line or an action that makes any sort of sense. Things just happen. Oh, sure, there's a a plot about having to stop Morgana le Fey (Alice Krige) from raising the dead and wreaking havoc on the world, but whatever. I guess. Oh, and of course there is some apprenticing, but, you know, who cares? There's a romantic subplot that's lazy, and then another romantic subplot that's even lazier. It's all so...shruggable. 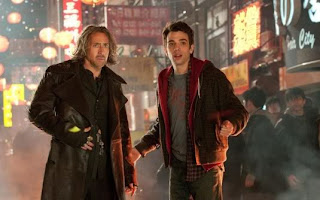 I can't imagine either of these two caring. Ever again.
But I wasn't angry. In fact, I had a smile on my face throughout, mostly because I just could not believe that someone actually made this movie. There's not even a script. There's barely an idea. Three writers are credited, but what did they do, exactly? Smoke pot and high-five each other? I don't know, but it strangely works somehow. The movie has a tone and feeling all its own, to the point where you could do something completely insane to your friends, but as long as you shout, "You've just been Apprentice'd!" everyone would totally understand. It's just weird. And silly.

We do get three great sequences, though, all involving Tesla coils. The first is when Jay Baruchel's character, the Apprentice, gets his coils working in time to music playing on his love interest's radio program. The second is when he actually shows her the Tesla music on a date, and it's timed so perfectly and it's adorable and cute and you wonder why the whole movie can't be like this. And then there's the final battle against Morgana, and there's one shot that made it completely worth the $9.50 I spent on the ticket. Thank God they repeated it twice. I love Nikola Tesla. The great shame, though, is that The Sorceror's Apprentice only flirts with brilliance in these three sequences, so that they're great surprises. The rest of the movie is an exercise in how gobsmackingly illogical a film can be.

Salt, on the other hand, tricks you. Its shot and cast seriously enough that you're actually taken in for a majority of the running time. Despite the plot hinging on either a bizarre plot to bring Communist power back to Russia, or maybe start a war with the US -- but not both, I'm pretty sure -- you're lulled into this sense of security. You think to yourself, as I did, "Wow, this is like old school James Bond!" Everything's edited so that you can see the action. Angelina Jolie is clearly doing her own stunts, and delivering a great performance in the meantime. It's a great chase thriller, a great conspiracy caper, and the suspense almost kills you. Where's it gonna go? How is she going to prove her innocence? Is she even innocent? WHAT'S HER DEAL? And for over an hour, you're invested in a serious thriller. 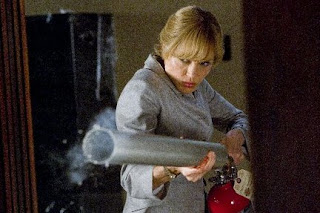 YEAH! USA USA USA!
Then comes one of Salt's disguises, and no I won't spoil it, but if you see the movie, you totally know which one I'm talking about. And it's there that I realized the movie was silly and preposterous. Because I was totally on board with training Russian children to be Soviet spies by memorizing episodes of "The Brady Bunch", and I could go with the ol' knife-in-the-shoe trick made famous by From Russia with Love, and I'm in full support of any movie that has a JFK conspiracy theory as a footnote. But that NATO disguise was just...silly. And ridiculous.

Not that it completely changes the tone, for that's the genius of director Phillip Noyce and writer Kurt Wimmer: they slowly reveal the silliness on display until it's too late to do anything. No, it's just ridiculous because it is. Because there's no way to take the movie seriously after that, even though it has one of the best villain executions of ever. But I think the movie understands this: why else would James Newton Howard's score suddenly go into a choir chanting, "SALT SALT SALT SALT SALT"? He knows what he's dealing with.

In the end, you could live without seeing either of these films, neither of which will be remembered in two years' time. Never mind that Salt leaves itself open for a sequel (maybe a trilogy!) -- I don't want that, and I can't think of anyone who would. These movies are distractions, lightweight popcorn films, and though Salt is certainly cut from a better-made cloth, in the end, it's all a lot of Summer Silliness.

Oh, and Jay Baruchel is awful in The Sorceror's Apprentice, while Salt has nothing but good performances.
Posted by Walter L. Hollmann at 4:21 PM