I couldn't believe a show like Rock of Ages was being made. We'd gotten an ABBA musical, and Moulin Rouge! was made up of a number of popular songs...but a Broadway show celebrating hair metal? It was not to be believed. Yet there was Angela Lansbury at the Tonys with Twisted Sister, and this show actually looked kind of...awesome.

My girlfriend went to New York and saw the show on stage, and raved about it for -- well, she still is. But her enthusiasm led to my getting the soundtrack. I have to admit, it's a lot of fun. Unlike musicals like Mamma Mia!, the writers actually make the songs work for the story, not vice versa. And sure, this may mean a lot of dialogue to set up different verses of a song, but at least they're making a legitimate effort. And haven't we all dreamed up musical numbers for songs like "Don't Stop Believin'", "We Built This City" and "I Wanna Know What Love Is"? I know I have.

Rock of Ages is a show that completely depends on both the performances and the audience's affection for Bon Jovi, White Snake, Twisted Sister, etc. The sketchy plot revolves around small-town girl Sherrie arriving in L.A. to pursue Hollywood dreams. She winds up falling for busboy/wannabe rocker Drew, just as German city developers get the approval to uproot the awesomeness of the Sunset Strip and replace it with a cleaner alternative. Also, a popular rocker gets in the way of Sherrie and Drew's feelings for each other. This plot is stretched over two hours as the characters rock out to 80s songs. Also, there's Lonny, who is hilarious.

It's a charming show, and a film version was inevitable. Adam Shankman is working on his adaptation of it, though no cast has been announced. If I am to believe his Twitter, they haven't really begun that process. Anyway, while his choices for Hairspray showed that his instincts are top-notch, I can't help but offer some suggestions of my own:


FRANZ
Who is He: Hertz's son, he and his father are city developers. At first, Franz goes along with his father's plot to destroy the Sunset Strip and create a cleaner, conservativer city. That's complicated when he falls for city planner and anti-development protest organizer Regina.
Songs: We Built This City/Too Much Time on My Hands, Here I Go Again, The Final Countdown, Hit Me with Your Best Shot, Every Rose Has Its Thorn
My Choice: 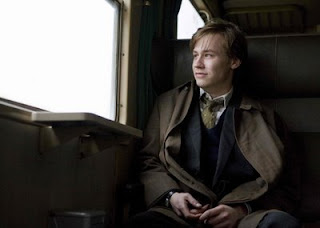 David Kross (Adam & Eva, The Reader)
I have no idea whether or not he can sing "Hit Me With Your Best Shot". But I'll give him the benefit of the doubt. He's young and good-looking and German!
REGINA
Who is She: The mayor's city planner, she is appalled at Hertz's desire to rid the Sunset Strip of sex, drugs, and rock'n'roll. She knows they built this city on the latter. A woman of action, she leads the protests against Hertz...even as she begins to fall for his son.


JUSTICE
Who is She: The owner/operator of the Venus Club, where gentlemen go to be entertained by ladies. Stripper-ladies. When Sherrie is at her lowest, she goes to work for Justice, who becomes a Momma Bear to the small-town girl.

Songs: Harden My Heart/Shadows of the Night, Any Way You Want It/I Wanna Rock [Reprise], Every Rose Has Its Thorn, Don't Stop Believin'

Tina Turner (Tommy, Mad Max Beyond Thunderdome)
We needed some sort of icon somewhere.  How can we make a tribute to the genre without The Queen of Rock 'n' Roll herself?


DENNIS
Who is He: The owner of the Bourbon Room, a bar on the Sunset Strip. Dennis has seen it all, so imagine his horror the Bourbon Room is marked for destruction by Hertz. With best friend Lonny, he gets rock band Arsenal to play one last show there...the same place where they made their debut years ago.

Songs: Just Like Paradise/Nothin' but a Good Time, We Built This City/Too Much Time on My Hands, Here I Go Again, The Final Countdown, I Can't Fight This Feeling, Don't Stop Believin'

Will Ferrell (Superstar!, The Other Guys)


HERTZ
Who is He: German city developer bent on destroying the Sunset Strip's decadence in favor of a more squeaky-clean alternative. Father of Franz.

Songs: We Built This City/Too Much Time on My Hands, The Final Countdown, Hit Me With Your Best Shot, Every Rose Has Its Thorn, Keep on Loving You, Don't Stop Believin'

Christoph Waltz (Death, Deceit & Destiny Aboard the Orient Express, the upcoming The Green Hornet)
A little obvious, but I'm not going to prevent a German who can sing from playing a German in a musical.


STACEE JAXX
Who is He: Lead singer of Arsenal, a rock band that's about to break up so he can start a solo career. Jaxx knows Dennis and Lonny from when Arsenal was unsigned and just starting out, so of course he repays a favor to his old friends -- after they blackmail him -- and Arsenal plays their last show at the Bourbon Room. It's the typical rock God character, egotistical and sexist. He dilly-dallies with Sherrie and proceeds to be a proper douchebag.

Songs: We Built This City/Too Much Time on My Hands, Wanted Dead or Alive, I Wanna Know What Love Is, I Hate Myself for Loving You/Heat of the Moment, Every Rose Has Its Thorn, Renegade

Colin Farrell (Pride and Glory, Crazy Heart)
Apparently tone-deaf, though his performance in Crazy Heart seems to contradict that. So I'm going with that. His own celebrity would lend credibility to Stacee's celebrity. And he's a sexy guy, right? Girls would fall for him.


LONNY
Who is He: The show's narrator, a man of great energy. Barfly and best friend of Dennis.

My Choice: Golden Globe Nominee for Best Actor in a Musical/Comedy (School of Rock)

Jack Black (Be Kind Rewind, Tropic Thunder)
He's already proven himself to be great screen partners with Ferrell. He has the right energy for the role, and -- hey oh! -- he can rock out with the best of them! Remember Tenacious D in the Pick of Destiny? That movie rocked. He rocked.


SHERRIE
Who is She: A small-town girl who comes to L.A. to pursue her dream of becoming an actress. She starts out working at the Bourbon Room, falling for Drew until he gives the "friendship" speech. So she dilly-dallies with Stacee, who gets her fired, so she works at the Venus Club for Justice. Then all sorts of other things happen. And it's a musical, so (SPOILER ALERT!) True Love triumphs.

Songs: Sister Christian, I Wanna Rock, Heaven/More Than Words/To Be With You, Waiting for a Girl Like You, Wanted Dead or Alive, I Want to Know What Love Is, Harden My Heart/Shadows of the Night, Here I Go Again, Any Way You Want It/I Wanna Rock [Reprise], High Enough, I Hate Myself for Loving You/Heat of the Moment, Every Rose Has Its Thorn, Oh Sherrie, The Search is Over, Don't Stop Believin'

Alyson Michalka (Bandslam, Easy A)
Not the most demanding of roles, but needs a capable actress who can play heightened while still allowing us to believe Sherrie. Aly was great on "Phil of the Future", she's a hot blonde, she can rock out, and she's a relatively fresh face.


DREW BOWIE
Who is He: He works at the Bourbon Room, but dreams of becoming a Rock Star. A nice guy, he falls for Sherrie, but plays the friendship card to calm her nerves, because he's so nice. Opening for Stacee Jaxx's final Arsenal concert helps to get him noticed by a Record Company Man, but the label he reps does not care for Drew's rock 'n' roll dreams. What's a guy to do?

Constantine Maroulis
The show is so recent that it seems ludicrous to replace everyone in the cast. He's the star, he's the Tony nominee, he's the Idol, he's the one that my friend was obsessed with in high school. I have a rule that states every role shall be recast, but I'm always willing to make exceptions. And yeah, I probably should've chosen a Rock of Ages clip, but I can't resist the pull of Batman Forever.
Posted by Walter L. Hollmann at 1:00 PM

Love the way you think! Constantine created the role of Drew, is still drawing a huge audience on Broaday and will soon headline the Rock Of Ages first national Tour. He certainly has the vocal chops for it and I'd love to see him in the film.