All month long, we're celebrating the Queen of Crime as she and her works appeared on screen, with a grand finale of five Murder on the Orient Expresses the first full week of November. Today, and all this week, we're focusing on her standalone works.

So go some lines from Dylan Blake's "Auguries of Innocence", from which Agatha Christie drew the title for Endless Night. The narrator/protagonist knows misery well - he's currently a chauffeur, but bounces around from job to job, dreaming of something more - dreaming of owning a house on a large plot of land in the countryside called Gipsy's Acre. Then he meets Ellie, and after a whirlwind romance they marry - she happens to be the sixth richest woman in the world, and she buys Gipsy's Acre. All seems right with the world...except for the rumors that the property is cursed. And the threats they receive from a local gypsy...

Published in 1967, Endless Night is one of a slew of Christie novels that sees the author depicting the liberal youth and changing mores of the era - Miss Marple dealt with it in At Bertram's Hotel, as did Poirot in Third Girl. The difference here is Christie focuses more on the characters than in trying to wrap a whodunnit around them. While death eventually occurs, the book plays more like a modern take on the gothic romance novel. It's an atmospheric novel, with a sense of melancholy and doom throughout, and a surprise ending that feels pretty devastating if you're not expecting it.

It was not only a reliable best-seller but well-received by critics, who were surprised both by Christie's pulling off a new style, as well as her focus on a young man of the working-class. Christie herself was quite pleased with the results: in a 1972 letter to a Japanese translator, she included it in a Top Ten ranking of her works. Between its success as a novel and its moody tone being in vogue at the time, it seems a natural fit for a film adaptation. And so.... 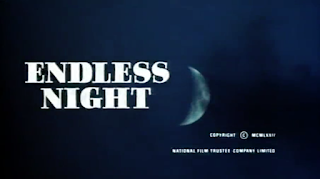 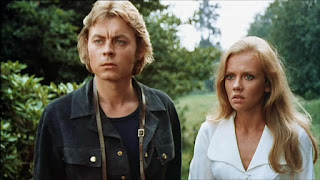 Endless Night is a mostly faithful adaptation that actually puts more focus on the character study aspect than any mystery elements, which is impressive considering how little of that there already is. The novel's structural conceit is somewhat amended effectively and fairly. And throughout, there are surreal edits and sequences that are suddenly dropped in the middle of a scene - a Siamese cat statue suddenly gets a spotlight in the middle of the dark; a crash zoom of a dead person is repeated three times, the color changing each time; a church service is intercut with advice from a financial advisor, both shot like a seasick sailor trying to keep his footing on a rolling boat.

It's a groovy film, flirting with experimentalism and working-class frustration without entirely being of a piece with, say, the films of John Schlesinger or Ken Russell. But then, the filmmakers are a pair of rascally vets - Sidney Gilliat writes and directs, with frequent collaborator Frank Launder serving as executive producer. The two started out as screenwriters, and among the fruits of their labors are Hitchcock's The Lady Vanishes, Green of Danger, and the St. Trinian's series of films. Christie was reportedly quite pleased with their involvement when production began.

She was not so pleased with the final product, calling the eventual film "lackluster" and bristling at the inclusion of some nudity and a sex scene; watching the scene today, the complaint seems hardly worth it - a glimpse here, some skin there, but filmed in a frenzy that implies more than it shows. Critics were mixed, with some unfavorably comparing it to previous, "more fun" Christie adaptations. And audiences...just didn't go. Although a smash in Italy, the box office receipts in the United Kingdom were disappointing - and in the US, it didn't get a release at all.

That's too bad because much of Endless Night works. Chief among them is the house at the center of it all. Our protagonist, Michael Rogers, wants to build a dream home at Gipsy's Acre; his friend Santonix, a very modern, very genius architect, wants to make that house a masterpiece. And damn if he doesn't do just that! 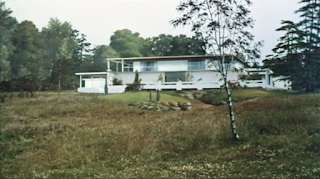 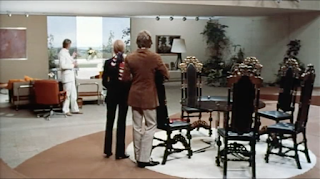 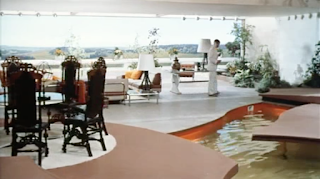 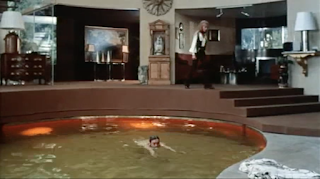 A swimming pool in the living room! Why? Why not!

Bernard Herrmann does the score, and of course, it's every bit as haunting and romantic as you would expect from the master. The aforementioned verses that give the film its title are set to music, sung by Hayley Mills' character (though actually performed by Partridge Family matriarch Shirley Jones).

But Christie isn't completely wrong, either. The problem, I think, is in its leading man. Over and over again, people say, "I've never met anyone like you." Much is made about what a charmer he is. And I just don't see it. Bennett isn't charming, nor does he seem interesting, nor does he seem anything other than petulant. It's not very attractive. Of course, I remember the same issue arising when it was later adapted for the series finale of Agatha Christie's Marple (many elements of Endless Night were first used in the Miss Marple short story "The Case of the Caretaker"), so maybe it's a character that's more difficult to translate to screen than one thinks?

The rest of the ensemble fares better, particularly Per Oscarsson as Santonix - friendly, sexy, high-spirited in spite of (or because of?) knowing he is dying. George Sanders is reliably solid in one of his final roles. And then there's Lois "Moneypenny" Maxwell, with an American accent and a sneer, shading future Bond Girl Britt Ekland and just being an all around bitch. It's wonderful!

While not readily available, it's worth a go if you're a Christie completist - and I am! So much so, in fact, that tomorrow, I'm not just taking on an adaptation of And Then There Were None ... I'm doing it Russian-style.