All Baggy and SAGgy

I can't believe so many of us get up before sunrise for ten minutes' worth of talking, only caring about the last three, fully aware that we can see a nice, typed press release within the next fifteen minutes on the computer. Yet there we were, watching the SAG Award Nominations live on TNT.TV, tweeting about it, reading Julian Stark's live-blogging, (I, too, have been sucked into Charmed while awaiting the announcement...though that was last year), chatting with the other awards-obsessed. It's the first mass of many this season, what with the Golden Globes announcing tomorrow and the Oscar noms in January, and the Hollmann noms before that....hopefully, even the 1957 ones (gulp!).

How did it all go down, you may ask? Well, let's take a look-see. First off, I did some predictions in the brief time I had beforehand. They were:

And how did I fare in my predictions? Read on, for you are about to witness the pleasant surprises and faint discouragement of the SAG Awards.... 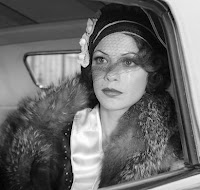 Whoa-ho! Janet McTeer! Hers is a name I've been hearing bandied about hither and thither all season, with some claiming she steals the film straight out from under Glenn Close. For some reason, I haven't taken the whisperings seriously, but now... Of course, as Andrew says, a SAG nom is not an Oscar nom. Still, her appearance here after her nomination (sans Close) at the Indie Spirits gives her some steam. More to the point...they included her at the expense of a pretty young female, practically unheard of in awards season! Did the SAG voters also see Cat Run and reminded of how MILFy McTeer can be? Or was it already getting too hot for 'em with Bejo/Chastain back-to-back?

Remember the scene in Cleopatra when Burton is getting all weird and is all...

That's how the Hammer/Hill noms struck me. PFF, BROOKS; PFF, VON SYDOW!!! Of course, now that I think about it, did Extremely Loud and Incredibly Close screen in time for the SAG deadline? Maybe that was my error... Anyway, it doesn't matter now since I lost my faith, but my first instinct when I saw J. Edgar was, "My God! Armie Hammer! It may...just...happen!"

It was Bichir instead of Shannon for that last-hope-for-indie slot. And it was DiCaprio instead of Oldman for that crown-jewel-performance slot. I don't think Bichir will repeat come January, but this does give DiCaprio a slight edge, non? I am sad about Oldman not getting in: his George Smiley is one of the better performances I've seen this year, a tightly-coiled, quiet, beautiful piece of work enlivened by the slightest turn of the mouth, twitch of the eyebrow, angling of the head. But, you know, I like DiCaprio's work in J. Edgar, too. I really do. I kind of like that whole film, actually, despite how messy, plodding and unfocused it is.

SWINTON! The first time since Michael Clayton that she's received individual recognition, and the second time ever! This bodes well for her, methinks...and I had her written off, too! Really, what is there to say? Nobbs and Iron Lady have yet to come out, I haven't seen Kevin....

Oh...way to Sophie's Choice me, SAG. Ignoring (or perhaps just missing?) the ensemble work of Tinker Tailor in favor of Woody Allen's latest, among his greatest, Midnight in Paris? I applaud this surprise, this pleasant, wonderful, Christmas surprise.

So, there you are. Full list here, and so on and so forth. May the best actor (of this lineup) win.
Posted by Walter L. Hollmann at 7:13 AM

Email ThisBlogThis!Share to TwitterShare to FacebookShare to Pinterest
Labels: awards, Bridesmaids, Midnight in Paris, The Artist, The Descendants, The Help

Tinker Tailor got snubbed. How can anyone inducted into SAG not have the where-with-all to commend at least five of the actors in that film with a nom? Just sick. Sick sick sick I say. On another note, I do love Midnight In Paris...