On Her Majesty's Foreign Press Association

And once again, I stayed up to watch the announcement of the Golden Globes nominees. Maggie Smith is continuing to rake up the nominations for her performance in Gosford Park Downton Abbey, while Woody Harrelson cracks wise in the most charming of ways and we learn that Irma Bunt is the President of the HFPA. 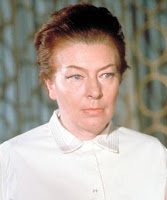 But, most importantly, the Awards race got a little more exciting. Let's say it with music, shall we?

Madonna's earworm song from her hilariously camp W.E. would be my choice, if just for some love to go that film's way, were it not for the presence of the Elton John/Lady Gaga duet from Gnomeo & Juliet. In the unlikeliest of places, I have found one of the best songs of the year. It's always the weird ones, though, isn't it?: Jennifer's Body, Walk Hard, The Odessa File...

Remarkably, none of the songs from The Muppets got in. Actually, as we shall soon discover, The Muppets was ignored completely. I can kind of understand it, I guess - as much as I love the film, it works best as a nostalgia factory. Once one starts thinking about that ending...and the human characters...and since it's the humans that do most of the singing....Still, one would have thought that the spirited nature of the film would get it recognized in Musical/Comedy. Alas, there was no room among these nominees:

You know, I guess I would have trouble labeling My Week with Marilyn a drama. It's such a lighthearted romp, a fun film that only now and then addresses the tragedy of Marilyn Monroe. Not the most profound of films, but I did enjoy it. Hell, I enjoyed all of these films! Come to think of it, this is one of the strongest slates I've seen in this category. Nicely done!

The nods for Dujardin and Wilson were, I felt, inevitable, but I am pleasantly surprised by the presence of Gleeson! An unfairly overlooked performance, surely. Then again, he was also nominated for In Bruges, so I don't know why this caught me off guard (HA!) as much as it did. Cheers for Gordon-Levitt, while Gosling was nominated for doing great work in a film that ultimately failed to match its stars in quality. Actually, excitingly, Gosling is a double-nominee this year:

But this was supposed to be about Gosling's double-header. True, I would have preferred to see him honored for Drive, but I'm totally down with a nominations for The Ides of March. Yeah, I've learned to be satisfied with just one...wait, what?

AHHHH! My beloved Ides of March is finally getting some traction this season! A subtle, sophisticated, brilliant reflection of the our political landscape (hope? change? they're all politicians, honey), it looked for a while that it might be slipping by the wayside. Certainly its shut-out at the SAG Nominations was cause for distress. Will the Globes' attention encourage more Academy members to check it out? I do hope so. Also, it should be noted: The Artist is doing rather well so far, and Spielberg was left out of director, a surprise considering the Globes' reputation for courting the famous. Even stranger considering the Drama slate:

But I guess the Globes are stricter on the five-wide for the Director category than in the Drama category. Somebody had to be left off. Still, the eyebrows raise slightly at Clooney getting in over The Beard. They also raise slightly at Hugo as a drama. I guess I see that. The kid's not exactly the happy-go-luckiest of children, is he? But there are a large number of lighter moments, plus, you know, family fare. I mean, if Alice in Wonderland was a comedy....

Okay, enough of the dilly-dallying. What else was there?

Plummer and Branagh: all present and correct. Brooks here and not at the SAG. Advantage: Globes. Hill, surprisingly (to me at least) makes it into Globes AND SAGs! Delightfully, a nomination for the overlooked A Dangerous Method finally happens, and for its strongest aspect, too. Mortensen's Freud nearly steals the show, a hell of a feat considering the competition within the film. Globes, you are baller this year!

...And then you throw curveballs like this. Of all the groups that I expected to nominate Melissa McCarthy for Bridesmaids, I thought I could depend on the same group who nominated Tom Cruise for Tropic Thunder to deliver. It's always the ones you trust who surprise you.

Just a few days ago, my roommate and I were discussing the Oscar race. He was predicting Tilda for a SAG nom, then an Oscar nom. "No, no," says I, "I don't see that happening. I think Tilda's doomed to be that one-time-only fling." "But they love her!" he insisted. "Only the once," I countered.

Now, perhaps this doesn't mean anything. The Globes did nominate Swinton before it was the cool thing to do (The Deep End). But when I see an actress nominated for a Golden Globe...and a SAG Award...and winning the NBR...well, I just gotta look at all the evidence and say, "Hot damn. There's a contender if ever I saw one."

Williams will easily win this, won't she?

Final thought: This spells ever more disaster for the Tinker Tailor camp. We are not amused.
Posted by Walter L. Hollmann at 6:41 AM

Email ThisBlogThis!Share to TwitterShare to FacebookShare to Pinterest
Labels: 50/50, awards, Bridesmaids, Hugo Cabret, Midnight in Paris, Moneyball, My Week with Marilyn, The Artist, The Descendants, The Help, The Ides of March, The War Horse

This is becoming a serious issue... where is the Tinker Tailor love??