Let's start out small, intimate, with but two characters to cast.

It had to have been many years ago -- before middle school, certainly --  my mother read us a picture book called The Christmas Miracle of Jonathan Toomey. It's very short, probably only a couple dozen pages, including illustrations, but it never fails to knock me out. Susan Wojciechowski and illustrator PJ Lynch pack so much subtlety, beauty, hurt and hope on every page, he who comes out dry-eyed is missing a piece of their heart. Truly.

So, the story! It's about a carpenter who does not deal with people, shuts himself away from the world, unhappy and alone, hating Christmas. One day, a widow and her son arrive with a proposition: to recreate a beloved Nativity set. Toomey reluctantly acquiesces, little realizing that the widow's son is keeping a watchful eye, with vocal opinions on how to make the perfect Nativity display. Of course, there's more to Toomey than meets the eye; secrets are uncovered, connections are made, and the reader is left weeping with joy and the spirit of Christmas.

I actually once wrote and appeared in an adaptation for my church's Christmas service, playing the role of the son. We used the Nativity set from home as a prop, since the resin figurines were modeled and painted to look like woodcuts. Even better, Lynch's illustrations in the book are an exact match for our family set. We've had that set forever, long before the book came out in 1995, a great coincidence that tied me closer to the story.

Some of you may have heard of the film version, a straight-to-DVD release that came out in 2007. Tom Berenger starred with Joely Richardson, and it features an appearance by one Miss Saoirse Ronan. I have yet to see the film, partly because I haven't been able to find out, and partly because I have my own idea of what Jonathan Toomey and the Widow MacDowell look like. Let me share it:

WIDOW MACDOWELL
Who is She: The widow who hires Toomey to recreate her Nativity set. A sweet woman, a good mother and Christian, her kindness helps to warm Toomey's heart. 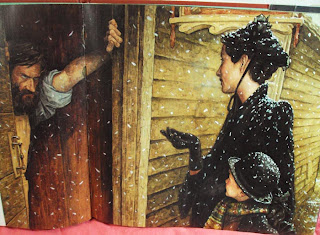 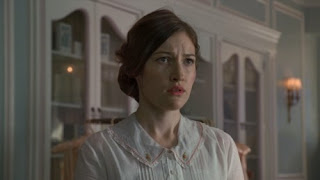 Kelly Macdonald (Finding Neverland, "Boardwalk Empire")
The widow is a young woman, I think, with warmth and kindness overflowing. Macdonald, who I've been a fan of since 2001's Gosford Park exudes that quiet, gentle beauty needed for the role.

JONATHAN TOOMEY
Who is He: A gruff carpenter who tries to ignore the Christmas season. At first put off by the widow and her son, he grows closer to them as the set nears completion. Of course, he also keeps a mysterious photograph in his desk... 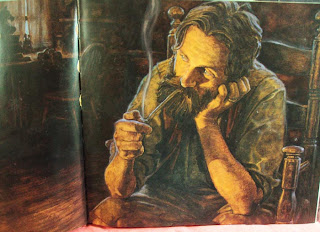 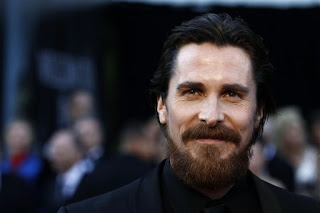 Christian Bale (Pocahontas, Flowers of War)
Besides his ability to sport a masterful beard, Bale is a strong performer able to tell everything about a character with his eyes and physicality alone, a great skill for a role like Jonathan Toomey. I would compare it to his quiet, noble turn in 3:10 to Yuma, really.

Any of you read the book? Anyone convinced to? It's quite lovely, and available for purchase on Amazon.

As for music, how about a John Denver tune? I really think it could apply to Toomey's backstory, carving of the figurines, growing closeness with the boy. It's also a helluva beautiful song:

Oh little angel, shining light
You've set my soul to dreaming
You've given back my joy in life
You' ve filled me with new meaning

Walter, this is a beautiful post...I am sorry it took me so long to get to this. I have NOT read the book, but I certainly will, now. Lately I have needed the cleansing effect of a good cry! And your casting is intriguing... Bale is exactly right as the gruff carpenter. Any YouTube videos of your performance??