Mary Poppins! Thank my oldest sister for my love of Mary Poppins -- when it was released on Disney Special Edition VHS, she was quick to purchase a copy and watch it with us. Even as a little boy, I found Mary pretty hot, and my sister said that I could distract Mary while she goes after Bert. I guess the songs and everything were good too, but mainly I remember Mary in that Nanny outfit. I'll take more than a spoonful, know what I mean?

So, about ten years pass, and I decide maybe it's time to revisit the film for my Retro Hollmanns. And I know I'll like the songs, but because I barely remember the essentials, I'm scared to discover (a) Andrews is too treacly, and (b) it's one of those "boo parents should be more FUN" kind of rides.

I was wrong. Andrews' Mary is sweet and beautiful, but she is also quite stern. And while the parents should be more fun, the kids should also be more understanding and gracious. It's a well-balanced narrative, great fun, actually moving. Haven't we all been brought to tears by "Feed the Birds"? Do we not, all of us, wish to spend a "Jolly Holiday" with Mary? Is it so unreasonable for us to "Love to Laugh"?

I can't even justifiably call Mary Poppins escapist, not when there's a performance like David Tomlinson's. As Mr. Banks, he gave my favorite performance of that year, and one of the best of all time. It's a light but effective portrayal of a man whose expectations conflict with reality, so he tries to adjust everything to fit his vision. There's something absolutely lovely about a film that holds up living chalk drawings as more "real" than a stuffy bank. Life needs humor and color and spontaneity; Mr. Banks' learning this is as touching as it is amusing. And again, it comes without holding up the children to esteem, for they have to earn their adventures.

Clearly, Oscar voters saw the same thing I did all those years ago, as it was My Fair Lady's chief opponent for the Academy Awards. With thirteen nominations, Mary Poppins was just one tick away from tying All About Eve for most-nominated film EVARR (Titanic made it first). It may have lost Adapted Score, Sound, Director, Picture, Art Direction, Cinematography and Costume Design to My Fair Lady. It may have been defeated at Adapted Screenplay by Becket. But it did come away with five Oscars: the Sherman Brothers brought home trophies for both Best Substantially Original Score (yes, it qualified for both Score categories) and Best Original Song, "Chim Chim Cher-ee". Peter Ellenshaw, Hamilton Luske and Eustace Lycett won for Best Visual Effects -- and when you see a flying Mary, floating smoke stairs, and animated penguins dancing with Dick Van Dyke, you know why. Cotton Warburton won Film Editing, and newcomer Julie Andrews famously was named Best Actress in a Leading Role, forever earning her place among the pantheon of Great Performances.

How, then, to compete? Well, I don't compete, I just do what I can and hope it passes muster. Does it?


THE BIRD WOMAN
Who is She: A poor woman who sits on the steps of St. Paul's, asking passersby to spare some change in in order to help feed the birds. A symbol of unselfishness. 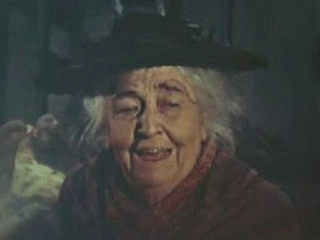 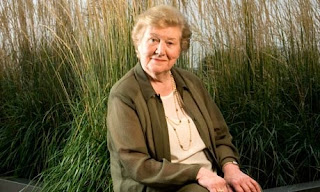 Patricia Routledge ("Keeping Up Appearances", "Hetty Wainthropp Investigates")
Despite the size of the role, Disney was determined to get one of his favorite character actresses to play the Bird Woman in what turned out to be her swan song performance. Now, I don't expect Routledge, who I've been a fan of for years, to up and die soon, but she is one of my favorite character actresses, and I would love to see her in this most beloved and crucial of cameos.

MR. BINNACLE
Who is He: Admiral Boom's first mate. He fires the daily cannon from their roof. Where does that thing land, anyway? 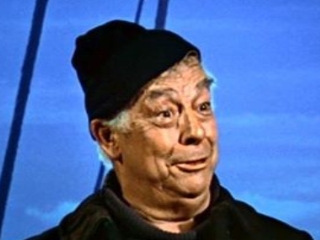 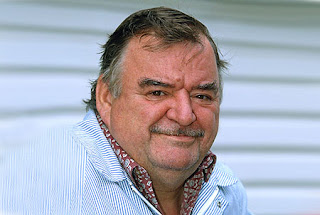 Paul Shane ("You Rang, M'Lord?", "Oh Doctor Beeching!")
I'd like to thank PBS for airing all those great Britcoms of the 70s, 80s and 90s. It exposed me to a number of great British character actors, and Shane was among my favorites. His subtle reactions would be hilarious for a quietly funny role like Mr. Binnacle.

ADMIRAL BOOM
Who is He: A neighbor of the Banks', Admiral Boom is a retired Navy man who still behaves as though he were on a ship. He fires a cannon on the hour from his rooftop, having decorated it with a mast and bow. He may be a little nutty, but he's harmless. Except for that cannon. Really, someone in the park is getting hurt. 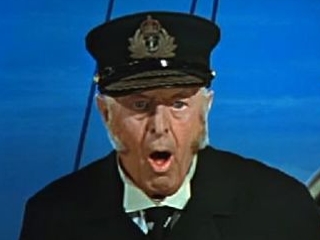 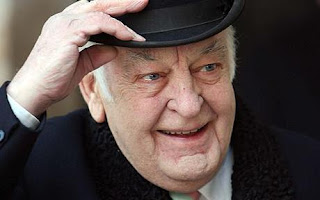 Donald Sinden (The Island at the Top of the World, TV's Marple: The Blue Geranium)
With his distinct voice and noble bearing, Sinden's been typecast for years as Sir This and Colonel That. He's got a wonderful sense of timing, too.

CONSTABLE JONES
Who is He: The copper what's in charge of this particular neighborhood. 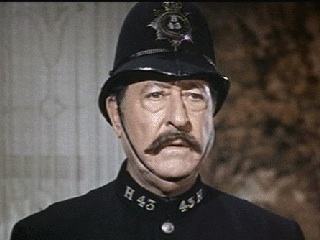 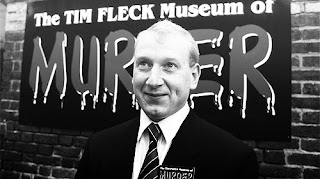 MR. DAWES
Who is He: Senior president of the Dawes, Tomes, Mousely, Grubbs Fidelity Fiduciary Bank. Hasn't laughed in years. 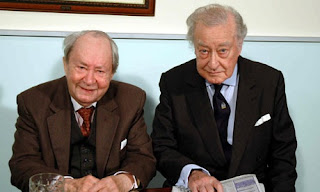 on the R: Frank Thorton (Are You Being Served?: The Movie, Gosford Park)
Of course, I could always have Bert play Mr. Dawes, but why not give Mr. Thornton a chance? He's still alive, still active in film, television and the theatre. He's Captain Peacock, for Heaven's sake!


YOUNG MR. DAWES
Who is He: Mr. Banks' immediate superior, the son of Mr. Dawes. 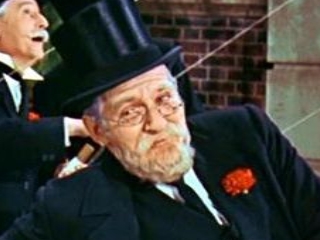 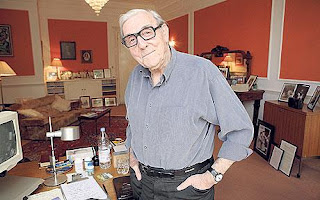 Eric Sykes (Theatre of Blood, Harry Potter and the Goblet of Fire)
Get it? Because he's the same age as Frank Thornton? HAHAHA!

KATIE NANNA
Who is She: The children's previous nanny, a very serious, stern woman who quits after they run off...yet again. 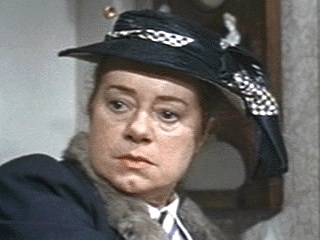 Elsa Lanchester (The Bride of Frankenstein, Murder by Death) 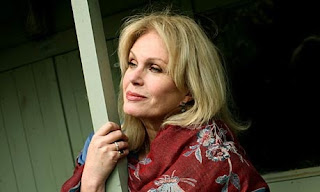 Joanna Lumley (James and the Giant Peach, Cold Comfort Farm)
Lumley can pull off that haughty, no-nonsense character when she's in the mood, and she's always a hoot.

MRS. BRILL
Who is She: The cook, often at odds with the maid. 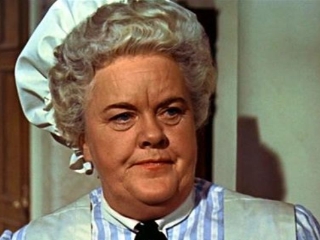 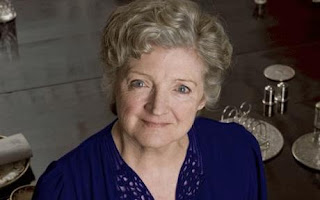 ELLEN
Who is She: The housemaid, often at odds with the cook. 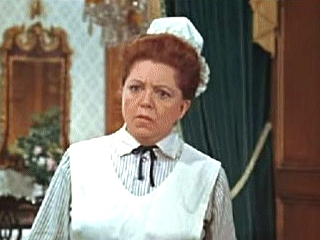 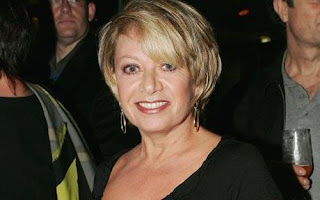 UNCLE ALBERT
Who is He: An uncle of Mary's. He frequently gets into fits of laughter that cause him and his possessions to levitate. He can't help it; he just loves to laugh!

MRS. BANKS
Who is She: The mother of the Banks children. She adores her husband, though worries that he's too serious. She loves her children, but doesn't know how to deal with them. What she does know is that women deserve the right to vote. Mrs. Banks leads the suffragettes, inspiring her servants while still kow-towing to her husband.

Rachael Stirling (TV's Tipping the Velvet, The Young Victoria)
Classy, funny, lovely, and a singer (like her talented mother, Diana Rigg). Stirling is one of those actresses that goes under-appreciated in the United States, but could really be effective with the right role. She would make the part her own without losing the original magic.

MR. BANKS
Who is He: The very serious patriarch of the Banks household. A bank manager, Mr. Banks is very proud of his work, keeping everything at home as exact and by the book as at the office. Banks may need to loosen up, but he is a gentle, caring man who is more befuddled by his children than angry or neglectful.

Jared Harris (Igby Goes Down, Lady in the Water)
I agonized over who could play this role more than I did Mary. Then, while watching "Mad Men", it suddenly hit me. Here's an actor who gets the comedy and the drama all at once, who can make a very serious suit into a loose, funny lover, who can present the flaws without passing judgment. Make it a Harris role.

BERT
Who is He: An old friend of Mary's, a new friend of the children's, a mischievous local who works as a busker, an artist, a chimney sweep... Bert is a fun-loving, all-around solid guy.

Benedict Cumberbatch (Atonement, Tinker, Tailor, Soldier, Spy)
Oh, it's only a matter of time before he owns the world. Such a great actor, charming, boyish, yet so...so adult.

MARY POPPINS
Who is She: A magical nanny who keeps everything spit-spot, practically perfect in every way.

Laura Michelle Kelly (TV's Marple: Nemesis, Sweeney Todd: The Demon Barber of Fleet Street)
I wanted a relative unknown, pretty, old enough to be a commanding presence but young enough for the children to trust. She needed to be a great singer and, most importantly, have a presence. And I tried to find someone else, because Kelly has already won a Laurence Olivier Award for her playing this role on stage, but then...I mean, if she's already mastered it, why not give her the film role?