You know you want to check out Part One of this conversation, if just for context. It's over at the March King's blog. It's our annual Oscar Conversation, The Gold Rush, a continuation of the conversations we had in his living room when we first started following Awards Season seriously.
SILVER SCREENER: So, on to the big stuff?

SS: Let's get Actor out of the way, because I haven't seen A Better Life yet.

MK: (chuckle) A Better Life... I guess I don't really get it. He was fine. But Best
Actor? Really? Anyway, my pick would have to be Gary.

SS: Oh, undoubtedly. There was no better moment on Oscar Nom Morning than when his name came up. It's quiet, it's layered, it's a beautiful thing.

MK: It's subtle, but somehow seems to explode at just the right moments. Something I would have liked to see George [Clooney] try. Not to knock George, I love George. But at this point in his career... between these two roles... Gary clearly trumps. And Brad [Pitt] did a good job as well. But he wasn't Gary.

SS: Though Brad really brought it, too. An old-fashioned Movie Star role that was just about perfect for his strengths. 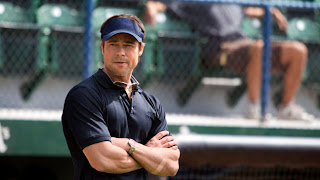 MK: Love Brad. He's really trying these days. Even looking back at his questionable performances...like Troy...you can still see how hard he was trying. Like I can understand how he may have been misled by the idea of muscle over madness... something about his fitness preparation still screamed actor. Sadly the actual performance fell flat. Then fast-forward to Benjamin Button. He was really something in that. Brad's starting to click in all the right places. No question.

SS: I think he has been for a while.

SS: And then, of course, there's the inevitable winner, Jean Dujardin.

SS: I'm down with that. Of this lineup, he's my close second.

MK: He's good. Not gonna deny that. I just would rather see Gary.

SS: Well, yeah, but of this specific lineup, I would be pleased for Dujardin, Oldman or Pitt if they got it. Full-on celebration.

MK: It's that kind of year man.

So can we back up for a second? I feel like we've skipped a few things. Documentary Feature, Animated Feature...

SS: Because who cares?

SS: Fine. In both those categories, I've seen Puss in Boots and Rango. Rango's great, so is Puss. I think Rango gets it, but I'd be down with a Puss win, too