I have a long relationship with My Fair Lady. I first saw it the summer before middle school, as research. There was a theatre day-camp I used to attend, and that year the show was the Lerner-Loewe classic. My grandparents insisted on renting the movie and letting me see the show for myself...and I was appalled. Who in the world could possibly like this film? The leading lady was shrill, the comic relief was odious, and the "hero" of the film was a snotty, mean-spirited jerk. And it was, like, three hours! Oh, what a miserable summer this was going to be.

I was already signed up for the camp, so I thought it best to grin and bear it. After all, I loved performing, and all my friends were at camp, and who knows? Now that I was older, more experienced, and in with the teachers, I could get the role I wanted most: Colonel Pickering, the only honorable member of the entire cast. I threw myself into the dialect lessons, mastering the bearing and speech of an upper-class English gentleman. My father got me to memorize the Pickering monologue I was using as an audition (they had different monologues for each character; you chose whichever  role you'd audition for). I even refused to revisit the film so that my audition was Walter Hollmann's Pickering, not Wilfrid Hyde-White's.

My mother and I would pray every morning before camp. Wanting Pickering but determined not to be too demanding, I asked God to give me a good part...as long as it wasn't Higgins. After hearing my prayer a third or fourth day in a row, Mom looked up and said, "You know, maybe you shouldn't limit God's options." Ok, fine. So my final prayer before the last day of auditions was to just do well, and get a great part.

The day came when they announced the cast. They would gather the entire camp, aged 6 - 13, to hear it, making it the very last event on the last day of the first week. There were, like, 600 of us or something. Maybe not that much. Everything seems so much larger in memory. So let's say 1,000 people were gathered, as they went through the cast -- exactly as I'm doing it now, making their way down until only the trio were left. And the role of Colonel Pickering goes to -- Michael K.!

Well, my prayers went unanswered. I was proud for Mikey, a born showman who would later star in a Florida production of A Stoop on Orchard Street some years after its off-Broadway run. Oy, but I wanted that role so. I was proud, too, of Krystal, who was just announced for the role of Eliza. She was a quiet newcomer, a wallflower -- until she went up for music auditions and belted out "I Could Have Danced All Night" with a masterful soprano that would make Kiri Te Kanawa retire in defeat. Lord, even the music director looked up from the keyboard with bug-eyes. Here's to them. My friends. They deserve it.

"And as Henry Higgins -- Walter Hollmann."

See what happens when you adjust your prayers?

So in the two weeks leading up to the show itself, I learned my script, my songs (this abridged version cut out "I'm an Ordinary Man" and "Hymn to Him"), and the Embassy Waltz. And, of course, when I watched the film again after the show (I refused to let my Higgins become Rex Harrison)....I fell in love. Maybe I was too tired before? Maybe I just didn't get it, and doing the show allowed me to further understand the story. I'm sure playing Higgins helped. Anyway, it's now one of my all-time favorite films, and Higgins one of my favorite characters. Just last week I snapped at a venomous co-worker, "Claws in, you cat!" And we all remember how much I support Harrison's Oscar win.

Harrison's was just one of eight Oscar wins. Andre Previn's arrangement of Frederick Loewe's music won Best Adapted Score over such notable nominees as Mary Poppins and A Hard Day's Night. Cecil Beaton won for Costume Design - Color (yay!) and Art Direction - Color, leaving Becket, Mary Poppins and What a Way to Go! in the cold...except for their other Oscars. Well, not What a Way to Go!, but a fun movie that one is! And, of course, it won Cinematography (Harry Stradling), Director (George Cukor) and Best Picture of the Year. And Sound (George Groves).

A couple years ago, it was announced that Emma Thompson was working on a screenplay for a remake of My Fair Lady. At the time, Keira Knightley was attached, and it seemed Daniel Day-Lewis may play Higgins. In this post-Nine world, DDL is out, Carey Mulligan is now attached  instead of Keira, and there's still been no word. I did some speculation about contenders for the roles, but only now can I offer a concrete Casting Coup. And there are many changed. All good, I think.

But surely, if one is to remake My Fair Lady, one could do a lot worse than this:

MRS. PEARCE
Who is She: Higgins' loyal housekeeper. Practical and unfazed by his nuttery. 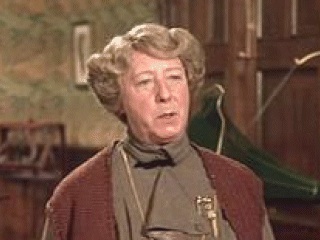 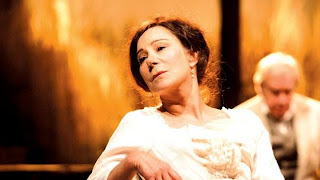 Zoe Wanamaker (Harry Potter and the Sorceror's Stone, "Poirot: Cards on the Table")

FREDDY EYNSFORD-HILL
Who is He: A handsome member of the upper class who falls in love with Eliza after her gaffe at Ascot.

Originally played by:
Jeremy Brett (War and Peace, "The Adventures of Sherlock Holmes")

My Choice:
Daniel Radcliffe (Harry Potter and the Deathly Hallows: Part 2, The Woman in Black)
With paler-than-ivory good looks and proven skills at singing (and dancing!), the ex-Potter could neatly fill the role of the aristocratic love interest. Lord knows he has time now.

MRS. HIGGINS
Who is She: Higgins' mother, who thinks her son can get tiresome. She offers Eliza a safe haven after she leaves Higgins. 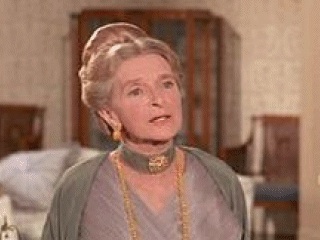 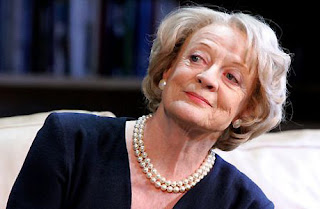 Maggie Smith (The Pumpkin Eater, "Downton Abbey")
It was a toss-up between her and Dench for this role, but Smith, I think, is much better at making an insult go down warm. With her, it may tweak you, but it's not quite cruel -- just stating the facts. "You might stick to two subjects: the weather and your health." Smith would actually make it sound like advice, but with so straight a face you know what a bitch-slap you received.

ALFRED DOOLITTLE
Who is He: Eliza's father, supposedly a chimney-sweep. In practice, he's a drunk and a layabout, but he's at least aware of it. Higgins calls him "the most original moralist in England".

My Choice: Hollmann Award Nominee for Best Supporting Actor (Zulu), Academy Award Winner for Best Supporting Actor (Hannah and Her Sisters, The Cider House Rules)
Michael Caine (The Dark Knight, Is Anybody There?)
The rare actor to maintain his cockney accent while still getting the plum roles and a great career. Not the worst singer, and Alfred Doolittle is a role that only demands so much. He'd really be great fun.

COLONEL PICKERING
Who is He: A dialectician, author of Spoken Sanskrit. Pays for Eliza's education in a bet with Higgins to pass her off as a lady at the Embassy Ball. A real father figure.

My Choice:
Ciaran Hinds (The Debt, Tinker, Tailor, Soldier, Spy)
He deserves it.

ELIZA DOOLITTLE
Who is She: A flower girl who wants lessons from Higgins so that she can be an assistant in a proper florist's. Aha, but the bet between Higgins and Pickering makes her the modern Galatea to their Pygmalion, as she learns to drop her accent (bit rarely her manner) to pass as a Lady.

My Choice: BAFTA Award/Golden Globe Nominee for Best Supporting Actress (The Devil Wears Prada), Golden Globe Nominee for Best Actress - Drama (The Young Victoria)
Emily Blunt (The Muppets, Salmon Fishing in the Yemen)
Oh, man, this kind of just came to me. True, I don't know if she can do a Cockney accent, but I've always assumed she could since her American accent is so impeccable. She's good as accents, is what I'm saying. She sings, but is it the same sort of singing required for Eliza? I don't care about that right now. That's probably a bad thing, but there you are.

HENRY HIGGINS
Who is He: An expert of dialects, a confirmed old bachelor and likely to remain so. Rarely does he consider the feelings of others, unless they become inconvenient to him. Little does he know how fond he is becoming of his pupil...

I expressly said, "Rosamund Pike for everything!".

Although, I do love Emily Blunt (so lovely in THE ADJUSTMENT BUREAU) but something about her seems too off to play Eliza. There's something so asymmetrical about her - strange word choice, I know - which is why I couldn't complete buy her performance in THE YOUNG VICTORIA.