Producers to the Left, Art Directors to the Right

It's a pretty groovy list: half of my own top ten is represented here, alongside fellow faves Argo and Lincoln. The big news, of course, is not only the inclusion of both Beasts of the Southern Wild and Moonrise Kingdom -- which many pundits expect to cancel each other out for the indie slot come Oscar time -- but that of Skyfall, the latest, some say greatest, of the 007 franchise.


And at first, I was all, "Well, it's the PGA, they like moneymakers. Didn't they include Casino Royale?" BUT NO -- that was 2006, the year of The Departed, Dreamgirls, Little Miss Sunshine, The Queen, and that awful Babel flick. So, of course, suddenly Skyfall's Oscar hopes are looking not awful, which would be a nice capper for the 50th Anniversary. Still, I'm not counting those chickens quite yet -- I remember 2008, when there were fewer PGA slots and The Dark Knight got in....

But they weren't the only guild to announce in the last 24 hours! The Art Directors also had their say. Like the Costume Designers Guild, the ADG separates their nominees into three distinct categories: Period, Fantasy and Contemporary. Period and Fantasy usually find their way to the Oscars; it's a long way for Contemporary, though.

The absence of The Master strikes me here. Will it be the kind of movie that only catches on with Oscar and the Globes, left out in the cold by the Guilds? Eh, could be. Meanwhile, I'm looking at five pretty deserving nominees, though I'd readily drop Les Mis in favor of Moonrise Kingdom.

I am a huge fan of Cloud Atlas, so the more gets it gets, the better I feel. 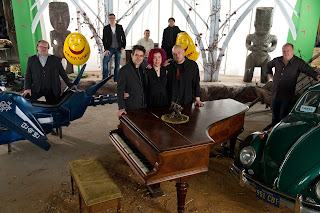 Only thing I'd argue with here is Life of Pi, whose art direction was...all right. I guess it was just what the film needed, but I would have preferred Beasts of the Southern Wild. Was it eligible, though?

The Impossible remains unseen by me, but I can attest to the quality of the others. Well, maybe not Flight. I'm sure the art direction and all was fine, but all I remember is the boredom slowly creeping in... That may not be fair to the men and women who worked hard on the damaged airplane and its parts in the warehouse, or on the cozy clutter of Whip's farmhouse, or on the porn set Kelly Reilly wanders on to, but I'm just being honest. I guess in its place I would have The Raid: Redemption (probably not eligible) or Bernie, which got so many things right in ways both subtle and very not so.

Four of my own nominees in this category show up here. You'll just have to wait to see which ones. Meanwhile, take a look at Andrew's piece predicting the nominees for Best Production Design!
Posted by Walter L. Hollmann at 12:37 AM