Finally, Part Two of my 1993 Retro Hollmann Awards! Last time, each of the six categories went to a different film. Will that incredible feat be repeated here? Who knows? (I do)

UFOs, floating men, aliens. It' s a menagerie of nightmares! 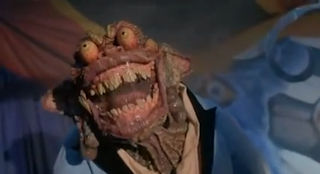 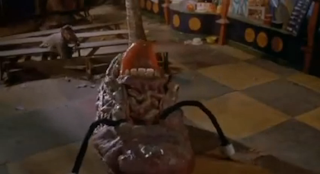 A lot of the effects also fall under makeup, but hey -- how about that evil shoe monster thing! 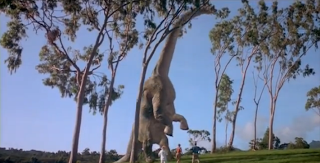 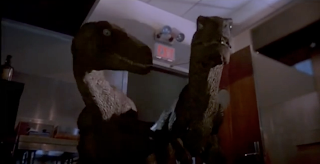 In the words of Mr. DNA: DINAH-SAHRS! (Also, I love that still of the raptors b/c all I can think is "Poor chiiiiild....sweeeeet chiiiiiild..." 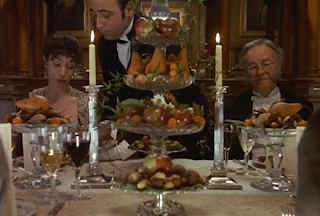 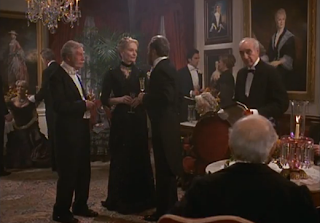 From my review: "Not a single wasted space, as the level of ornate ostentation changes along with the setting -- relatively modest for that summertime getaway, but positively crammed when visiting the grande dame of New York Society." 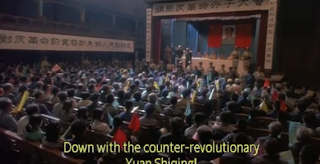 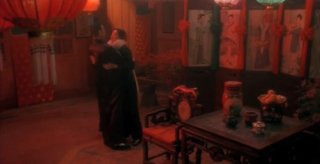 You can see the shifts in government in the theatre, as it gradually changes to accommodate the more rigid Communist regime. Goldfish screens are a plus; so is the the large home of Shitou and Juxian. 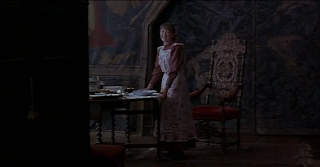 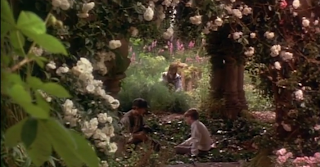 Apparently, the wallpaper in Mary's room actually tells the story, symbolically? That's pretty cool. It is an ice cold mansion, which makes the warm, chaotic beauty of the garden all the more effective. A garden they made themselves, by the way!

Well, my God, you enter Ouisa's apartment, visit the gallery, go to Kitty Carlisle's dinner party -- just look around, and you know all you need to know about these people. Check out, too, the studio Heather Graham lives in! 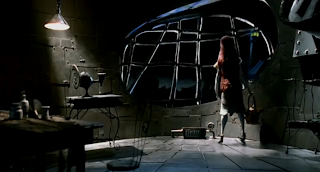 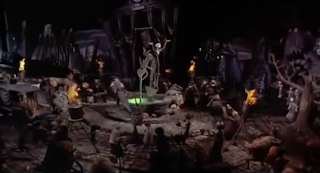 The cat alarm has always delighted my mother, and I've always liked the bizarre satellite look of Dr. Finklestein's "mad scientist" castle. Oogie Boogie's casino theme, the trees, the little twisted details of Halloweentown -- and Christmastown, too -- and, of course, those toys! Creative, detailed, scary. 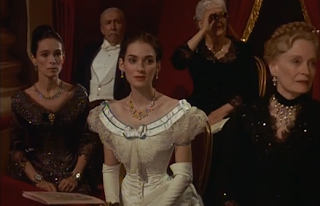 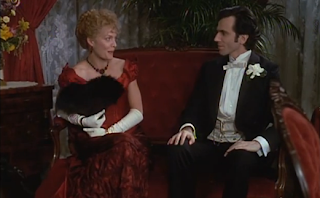 What I wrote for PD...goes for this, too. Appropriately opulent. Michelle Pfeiffer and Winona Ryder are exquisitely turned out.

Dave is clearly trying too hard; Carlito looks good, but he's keeping a low profile, so you know, a lot of black; Gail's wardrobe is truly period without yelling PERIOD PIECE; and Benny Blanco from the Bronx is all flash. Props, too, for Dave's Adidas tracksuit. 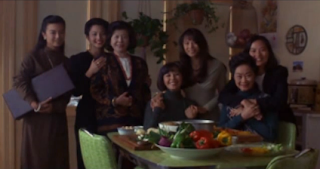 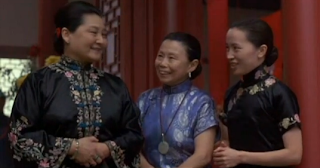 Period silks and contemporary turtlenecks! Yup, that's about it. AND I LOVED IT. 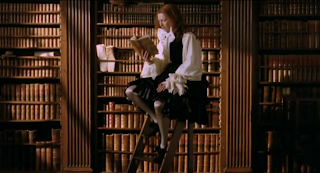 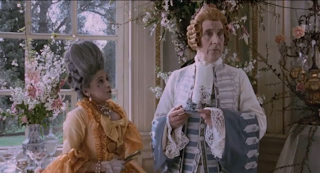 Behold! Four hundred years of English history as Orlando entertains the Virgin Queen, ice skates with Russians, ambassadors in the Middle East, becomes a woman, rides a horse, has a kid, writes her memoirs...The costumes take us through  evolving times and changing mores. 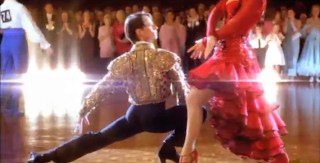 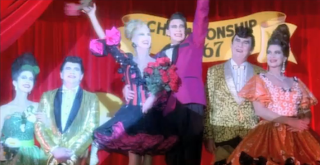 Sparkly, over-the-top, and AMAZING. And it ain't just about the show gowns -- from pompous Barry Fife's ill-fitting suits to Dad's dorky nerdwear to the way we always get a good luck at our hero's shoulders and dancer's butt.

It's all about that final monologue. 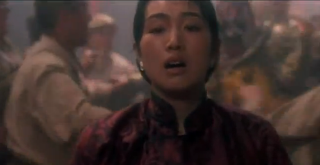 I love this performance. Gong Li helps us understand all sides of Juxian, so that we see the beauty Shitou fell for, the manipulator Douzi doesn't trust, the desperate survivor doing what it takes to maintain a position as power changes hands. She really gets us to sympathize with Juxian, so that her final heartbreak hurts us just as much. 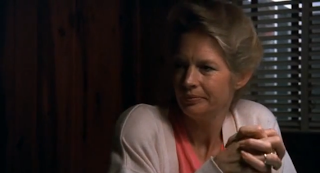 A simple, non-showy part, played beautifully. She has to go from stern boss to sympathetic friend, but she can't lose the protective momma side of the character -- not so easy, considering her son's more or less an antagonist. Lyman balances all this, and we believe the two sides of her -- the warm provider and the relentless businesswoman -- live within her. She has a scene near the end in Ruby's house that moved me to tears, one my favorite moments of the year. 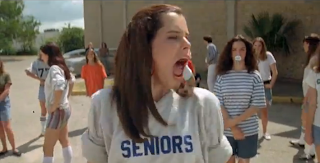 There's giving good bitch, and then there's making it an art-form. Posey's delicious line-readings reveal a queen bee who is going to relish her time at the top, starting with what is sure to be an unforgettable summer. "You love it, bitches!" "I'm going to make next year a living hell..." "Lick me!" And her looks! She's so amazing!

I wrestled a while with giving this spot to Christina Ricci's Addams Family Values performance or this one. Obviously, Ms. Hathaway won out, so much so that even the film focuses more on her than it does some of the actual hillbillies of the title! Tomlin perfectly embodies the Ms. Hathaway spirit, right down to the exaggerated, bizarre expressions, as though she's anticipating a freeze frame that never comes. But because Tomlin throws herself into it, physically and vocally, we believe her. It's not just consistent with the film's tone; she sets the film's tone.


Much Ado About Nothing
Patrick Doyle

The Remains of the Day
Richard Robbins

When Mary calls the garden "magic", this is what she's talking about.

Potter writes with the same serious whimsy with which she directs. The sexual politics of the situation, and the subtle variations with each new century, are subtly conveyed, never insistent. Of course, one must assume that Virginia Woolf did this as well, Potter translated it succinctly, with warmth and humor.

From my original post: "The story is all about the interior, and it must be very difficult to convey repression on the page without voiceover; that she relegates such passages to surface letter-writing is a treat, one of many instances wherein the characters start to express themselves, only to back away. This also happens late in the film, where Stevens approaches a sobbing Miss Kenton...only to discuss domestic matters. Jhabvala is able to criticize -- sans condescension, avec empathy."

From my original post: "Surprising in its detailed affection for the members of the list, so that instead of symbols or martyrs or victims, we get human beings, all trying to survive, some selfish, others selfless, some gullible, some in denial, some protecting their loved ones. Of course, that's not to mention the subtle arc for Schindler, the traces of (accidental?) humanity found in the sadistic Amon Goeth, the fact that none of it feels manipulative. This is stellar work."

Empathetic and intelligent, Zaillian's modest adaptation feels closer to truth than other "based on a true story" films. It helps that he remembers and believes in the protagonist's kid-ness, refusing to make   him precocious or wise beyond his years, or even funny. He's just a fucking kid. It's really all about the way adults use children to live out their own dreams, anyway, but Zaillian is also careful never to fully condemn these people. Like I said: empathy. It goes a long way.

It really is the ultimate Altman film, with a sprawling cast to rival Nashville, capturing a vast swathe of LA life. I can't imagine the work that goes into adapting several short stories and a poem, plus your own original idea, into a single narrative about shattered illusions and the darker side of American life. Even if Altman's direction isn't up to his usual standard (I do think he wanders more than usual), the dialogue and structure are A-plus.