As Barbra herself once said, "The moment has come."

1993 just happened to be one of those superior years where many of the nominees were deserving, and the ones that weren't were still worth watching. Like 2008, I feel. And what could better represent this year than the joyous visage of Harrison Ford?:

The Fugitive
***
Great fun, but Best Picture? Well, why not? It's tight, it's entertaining, and it attempts to set the alarm bells ringing regarding corruption in the pharmaceuticals industry. Probably not the deepest, nor the most sensible story -- why would the villain intentionally give his adversary so many clues to catch him? -- but a ripping good yarn.

In the Name of the Father
****
I can see someone taking it to task for being too earnest, too sincere. That someone is a monster. It's fairly straightforward, but who needs flash and distraction when the story is this powerful? It's an important film, not just about injustice, but desperation, redemption, and the love between a father and son. Thanks to its energy, performances, and -- thank the Lord -- occasional humor, it's easily rewatchable.

The Piano
***
While I think Andrew makes a good argument in its favor -- including pointing out the empathy given to all sides in a key scene -- I'm afraid it still leaves me a bit cold. That's fine; that's life. Surely it's not a complete failure, though: it's quite unforgettable, and I think about it often, and I have the soundtrack. I do admire Jane Campion, so that certainly helps.

The Remains of the Day
*****
Of course, it's the ones I love I find the hardest to write about. How to express the sense of loss, the beautiful sadness that is The Remains of the Day? It is Truth, anchored by two exquisite performances. I love its exploration of class division, and how that not only informs one's politics and political awareness, but also how one conducts himself in matters of the heart. Stephens is the Perfect Butler; it's who he is, what he's treasured for. And yet it is this that will render him irrelevant in a post-War world. It is this that keeps him from truly engaging, losing both his father and the woman he loves. I could watch this again and again.

Schindler's List
*****
But this is also a masterpiece! Schindler's List is one of the most moving, human films I've witnessed. It is not misery porn, it does not wag its finger, nor does it get pedantic. Its characters are not victims and monsters, but people, who laugh and fuck and shit and play piano and gossip and smoke cigarettes. I even love that a film that could be an Inspirational Flick of the Triumph of the Human Spirit ends so bittersweetly, with a guilt-ridden hero on the run. Even when we see the footage of the real life survivors and their descendants, there's that last monologue ringing in our heads -- "I could have saved more". It's heartbreaking, and it's fascinating in a movie like this.

Schindler's List won the Oscar for Best Picture -- unfortunately for Kathleen Kennedy, it's the one Spielberg film she didn't produce -- but I really adore  the other five-starrer. Oh, to choose between Stephens and Schindler! Again! Ok, time to just leave in it up to the fingers. Don't think. Just type with your heart: 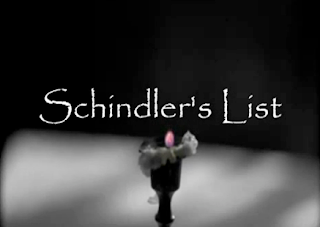 SCHINDLER'S LIST
spittake. did walter just choose this over a merchant-ivory film?

And that completes our Oscar Coverage of the 1993 Retrospective! To recap, my votes went as follows:

Email ThisBlogThis!Share to TwitterShare to FacebookShare to Pinterest
Labels: 1993, In the Name of the Father, Oscars, Schindler's List, The Fugitive, The Piano, The Remains of the Day