Straight-faced take on fantasy creatures in a modern setting is pretty neat, but the lack of coherent follow-through on characters and plotlines - you know, the story - feels like a bad call! Hardly the worst of the year, if only because, come on, how can you feel strongly one way or the other about this movie?

Nuns, assassins, and Golden Globe nominees after the jump...

Two Agatha Christie flicks in a single year?! I'm spoiled! This one, in select cinemas and On Demand, is based on Agatha's personal favorite of her own novels. It's a solid adaptation: an exquisite cast (Glenn Close! Gillian Anderson! Christina Hendricks!), cheeky production design, a genuinely shocking denouement. Pacing takes a while to find its footing, some editing choices a little camp.

Takes its time exploring young girls' relationship with faith and the motives that lead to taking vows, with Vatican II and its toll on convents as the backdrop. Never trivializes Catholicism as a faith, but confronts its particular problems as an institution. At times, the score and dialogue - particularly in scenes with our protagonist's irreligious mother - dot the i's and cross the t's too boldly. It's a complex film having a difficult conversation.

I did drama competitions in high school, and one teacher/judge always wanted to encourage kids in the arts - whenever he had nothing good to say about a performance, he would say, "You looked like you had fun!" I can't even say that much about The Villainess, whose first-person-shooter video game aesthetic and incoherent plotting are made more unbearable by the dour inscrutability of its performances. 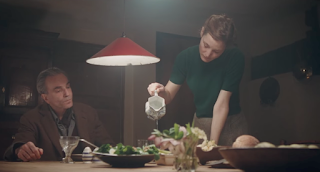 What a kooky good time, a feast to be savored! Sexy, stylish; a star is born in Vicky Krieps. Authentic-feeling dinner and breakfast table arguments. The longer you spend away from it, the more you wish to return: it's a show-er and a grower!

All the Money in the World
dir: Ridley Scott
scr: Daniel Scarpa, based on Painfully Rich: The Outrageous Fortunes and Misfortunes of the Heirs of J. Paul Getty by John Pearson


Thus endeth my year in cinema! I tried seeing the Korean film 1987: When the Day Comes, but the version with English subtitles won't come out until next week. Ah, well.

The Hollmann Awards are ahead! In the coming week, we'll talk about my most anticipated titles of the upcoming year (Monday) and my Top 25 of the year (Tuesday and Wednesday). And it's a wide range to choose from: including the six films reviewed above, I saw a total of 127 films:


After the Storm
Alien: Covenant
All Eyez On Me
All Nighter
All the Money in the World
Along with the Gods: The Two Worlds
Anarchist from the Colony
Atomic Blonde
Baby Driver
The Bad Batch
Battle of the Sexes
Battleship Island
Beatriz at Dinner
Beauty and the Beast
The Beguiled
The Big Sick
Blade Runner 2049
The Boss Baby
Bright
Burning Sands
Buster's Mal Heart
The Bye Bye Man
Call Me By Your Name
Cherry Pop
The Circle
Coco
Colossal
Crooked House
A Cure for Wellness
Darkest Hour
The Death and Life of Martha P. Johnson
The Devotion of Suspect X
The Disaster Artist
Downsizing
Dunkirk
The Fate of the Furious
Fifty Shades Darker
First They Killed My Father
The Florida Project
The Foreigner
Geostorm
Get Me Roger Stone
Get Out
Ghost in the Shell
Girls Trip
God of War
Good Time
Gook
The Great Wall
The Greatest Showman
Guardians of the Galaxy Vol. 2
Happy Death Day
Home Again
I don't feel at home in this world anymore.
I, Tonya
Ingrid Goes West
It
It Comes At Night
The Jade Pendant
Jane
Jigsaw
The King
King Arthur: The Legend of the Sword
Kingsman: The Golden Circle
Kong: Skull Island
Lady Bird
Last Flag Flying
The Last Jedi
The Last Word
The LEGO Batman Movie
The LEGO Ninjago Movie
Logan
Logan Lucky
The Lost City of Z
The Lovers
Lowriders
Marshall
Maudie
The Mayor
Memoir of a Murderer
The Meyerowitz Stories (New and Selected)
Midnight Runners
Molly's Game
mother!
Mudbound
Murder on the Orient Express
New Trial
Nocturama
Novitiate
Okja
Oklahoma City
One of Us
Only the Brave
The Ornithologist
Our Souls at Night
Personal Shopper
Phantom Thread
The Post
Power Rangers
The Prison
Professor Marston and the Wonder Women
A Quiet Passion
Raw
Roman J. Israel, Esq.
The Sense of an Ending
The Shape of Water
Spider-Man: Homecoming
Split
Strike a Pose
Stronger
The Swindlers
A Taxi Driver
The Temple
Thor: Ragnarok
Three Billboards outside Ebbing, Missouri
A United Kingdom
Valerian and the City of a Thousand Planets
Viceroy's House
Victoria and Abdul
The Villainess
The Void
War for the Planet of the Apes
Warriors of the Dawn
Wonder
Wonder Woman
XXX: The Return of Xander Cage
Youth

Email ThisBlogThis!Share to TwitterShare to FacebookShare to Pinterest
Labels: 2017, All the Money in the World, Bright, Crooked House, Novitiate, Phantom Thread, reviews, The Villainess, 악녀