All This Meat, And No Public Enemies!

A quick catch-up, since I am woefully behind: 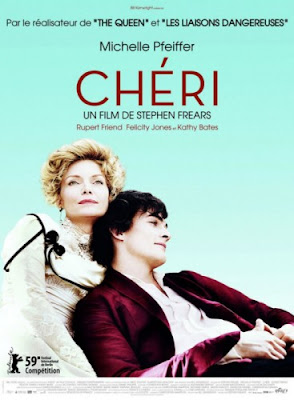 First, I saw Cheri about a week ago. While it was great fun for the most part, it was a little annoying that it took about fifteen minutes to go anywhere. After a fascinating title sequence chronicling the history of famous courtesans, the film searched in vain for the proper tone before finally settling on Light Drama. Alexandre Desplat's score was overwhelming, though typically beautiful. Michelle Pfeiffer was OK, Kathy Bates quite good, too.

Rupert Friend, however, as the titular Cheri, is best in show, nailing the bored effete manners of Colette's most famous male protagonist. Christopher Hampton's adaptation of the short work was admirable, and the delivery of important details from the literary sequel was impeccably done. Director Stephen Frears also narrates in a Stephen Fry-esque manner, and it works. Of course, costumes and production design are to die for. I give it a thumbs-up. You could do much worse. 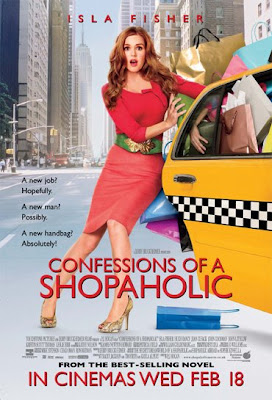 Just as frothy, but at least consistently so, was the likable Confessions of a Shopaholic. Isla Fisher plays the lead role broadly but adorably, and who can resist the charms of a zany redhead? It's a perfect formula. Hugh Dancy is the love interest, and the two have an undeniable chemistry together. Joan Cusack and John Goodman are distracting as the parents, a shame since I adore both. Kristin Scott Thomas continues to kick ass and take names, this time with a French accent, as a kinder, European version of Streep's Prada-wearing Devil.

But I don't understand certain conflicts. Why should I root against the debt collector? He's just doing his job, and though Fisher is beautiful, she should pay what she owes. Her superior manner at the film's climax is unwarranted and annoying. The villainess of the piece is odd, too. There is no reason why she should care to sabotage Fisher's career to the extent that she does. Like, no reason is ever given. I don't understand it at all.

The use of Amy Winehouse's "Rehab" is clever, and as this film is about a clotheshorse, the costumes are FAB FAB FABBITY FAB. Chalk this up as another film that makes me want to move to New York. 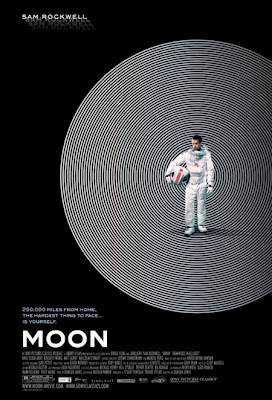 Moon. Wow. Moon. A one-man show of sorts starring Sam Rockwell as the lone operator of a harvesting plant located on the Moon, with just two weeks to go before the end of his three-year contract. The difficult thing is, it's impossible to talk abotu this movie without some serious spoilers. So, at the risk of sounding superficial: WOW production design, great score, please give Rockwell an award of some sort (Hollmann Awards, possibly?), Duncan Jones, you are a director not to be trifled with. 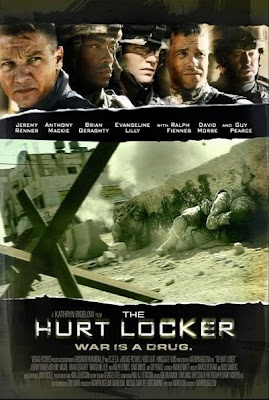 Another film that's hard to describe is The Hurt Locker. I know it works. It had me on the edge of my seat. There are some great performances, a great score (shades of Morricone), and as my only previous exposure to Kathryn Bigelow was Point Break, I was impressed with the directing. There's a lot going for it. Jeremy Renner is certainly engaging to watch, and I am so proud of myself for knowing Brian Geraghty (my favorite performance in the movie) was headed for great things. I wish I could do backflips and declare how EFFING AMAZING this movie is, but with The Hurt Locker, there's just a serene knowledge. Hyperbole can't emphasize how great this movie is. It just is. You can disagree if you want, but you'd be sorely mistaken. 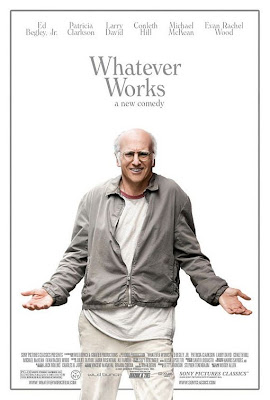 As for Whatever Works...it does. I have been reading a lot of negative reviews for this movie, and I don't get them. This movie is funny. Laugh-out-loud funny. True, I am a rabid Woody Allen fan who counts The Curse of the Jade Scorpion among my favorites, but Whatever Works is a smart, sexy comedy that had the entire theater in stitches. I saw it with friends who find Woody's humor a little much, and even they were having a ball.

In true Allen fashion, it follows the love lives of friends and acquaintances over a period of two years, all centering around the May-December relationship between genius nihilist Boris Yelnikoff (Larry David) and Southern runaway Melodie St. Ann Celestine (Evan Rachel Wood). Having not seen Thirteen, I count this as Wood's best performance. She is so on fire, so alive, so sexy! The jailbait outfits they put her in certainly help, of course, but I've never seen her so unmannered, so ironically real! Larry David gives a surprisingly human performance, despite having to deliver a number of verbose monologues expounding on the hopeless evils of the human race. But the interaction between the two of them is just delightful!

Patricia Clarkson is sexy and funny as Wood's mother, a religious matriarch turned Village artiste. Of course, we are used to greatness from Patty C, but she's always a delight to watch. And again, the costumes she's in. Awesome.
Posted by Walter L. Hollmann at 3:13 PM

I love that I saw two of these with you. And that I agree with both reviews... how rare!