I'm afraid I've been having a number of technical difficulties with the Hollmann Awards this year. I usually have them out before the Oscars, but between Internet problems, saving issues, and a Microsoft Word plagued by an odd virus, I'm going to have to do this a la 2007 Golden Globes - that is, just a list of nominees and winners. We'll let Judi and Maggie host next year, and hopefully I can get more of a jump on things then. My apologies to everyone. 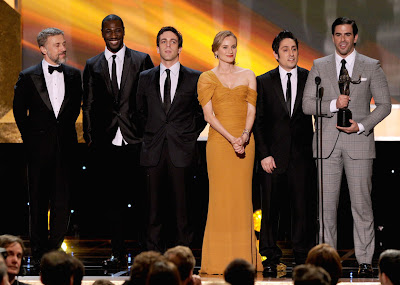 1. Simone Bar, Olivier Carbone, Jenny Jue and Johanna Ray, Inglourious Basterds
Bar is a German casting director whose other credits include The Reader and The White Ribbon. Olivier Carbone is a French casting director who also worked on La Vie en Rose.
Jenny Jue and Johanna Ray have worked together on the Funny Games remake, Repo! The Genetic Opera and Brian De Palma's The Black Dahlia. 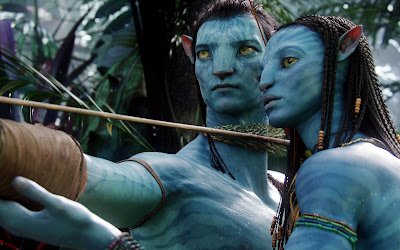 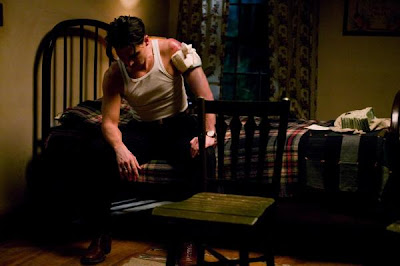 1. Nathan Crowley (PD), Patrick Lumb (AD), William Ladd Skinner (AD) and Rosemary Brandenburg (SD), Public Enemies
Echoing the art deco style of the period, Crowley and crew got every detail, down to the little price tags on the shops. When they needed to trade in shine for dust, it was perfect. 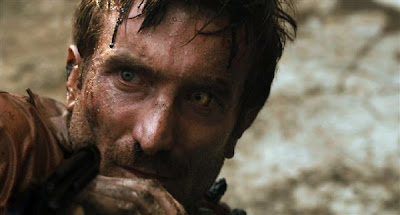 1. Joe Dunckley, David Meng, Frances Richardson, Sarah Rubano, Richard Taylor and Leon Von Solms, District 9
Taking body horror to a new level, we got to see Weekus transform in the most grotesquely realistic manner. From nails falling out to a prawn claw replacing his hand, the effect was astounding. 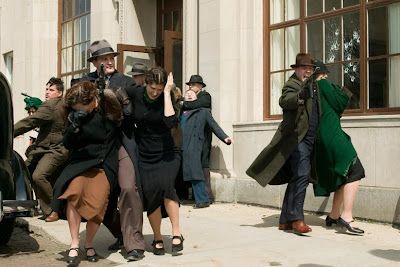 1. Colleen Atwood, Public Enemies
What a gorgeous fucking film. This is really the only movie where you actually notice the duds on the men...ok, the first for me, anyway. I would seriously wear anything there. And the women? Gorgeous. Don't you love the ropey look of Marion's poor red dress, compared to the fur finery of when she's dating Dillinger? Such exquisite detail.

1. Through the Trees, Jennifer's Body
Works as both a genuinely great "boo-hoo" song, and as a satire on such music. How does it do it?

BEST ORIGINAL SCORE
5. Alexandre Desplat, Fantastic Mr. Fox
4. Elliot Goldenthal, Public Enemies
3. Alexandre Desplat, The Twilight Saga: New Moon
2. Alexandre Desplat, Julie & Julia
1. Abel Korzeniowski, A Single Man
I admit, I like my music big. Abel, I hope you don't mind if I say the music here reminded me of Philip Glass's work in The Hours, which I find to be the greatest score ever. The beauty of it is just so...unbelievable. Korzeniowski effortlessly evokes the 1960s. Highlights include "Swimming", "Snow" and "Drowning".

BEST EDITING
5. Roderick Jaynes, A Serious Man
4. Sally Menke, Inglourious Basterds
3. Alan Edward Bell, (500) Days of Summer
2. James Cameron, John Refoua and Stephen Rifkin, Avatar
1. Alexander Hall, The Messenger
You know, too few of these awards are given to editors of films that rely on long takes. But really, the editor cuts for dramatic emphasis, unless he needs to cut around the bullshit. So, why cut all around the place if all you need to make your point is a single long take? That's what makes sense for this movie.

BEST CINEMATOGRAPHY
5. Robert Richardson, Inglourious Basterds
4. Greig Fraser, Bright Star
3. Eduard Grau, A Single Man
2. Anthony Dod Mantle, Antichrist
1. Dion Beebe, Nine
The only truly cinematic aspect of the film. The use of the projector in "I Can't Make This Movie", the spotlights in "My Husband Makes Movies", the dreamy effect of "Guarda la Luna", the black-and-white "Take It All". All brilliant.

BEST ADAPTED SCREENPLAY
5. Nora Ephron, Julie & Julia
4. Jason Reitman and Sheldon Turner, Up in the Air
3. Geoffrey Fletcher, Precious: Based on the Novel 'Push' by Sapphire
2. Dave Eggers and Spike Jonze, Where the Wild Things Are
1. Wes Anderson and Noah Baumbach, Fantastic Mr. Fox
It's clever and it's funny. Little nuances, like Mrs. Fox's "tarty" background, truly develop the characters, instead of merely serving as a throwaway joke.

1. Peter Capaldi, In the Loop
I mean, this scene alone. That snap as he says, "Now fuck off." Has swearing ever seemed this natural?

1. Sam Rockwell, Moon
A one-man show that it is impressive in it understatedness. 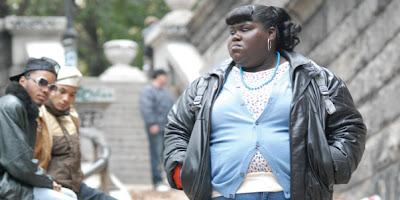 1. Gabourey Sidibe, Precious: Based on the Novel 'Push' by Sapphire
Such a raw performance. That a first-timer can give this kind of performance is staggering. 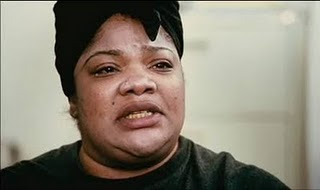 1. Mo'Nique, Precious: Based on the Novel 'Push' by Sapphire
An unbelievable performance from the great comedienne. Just try to wrap your head around this.

I am happy to see The Messenger as #1. Good choices all. I'm so glad you gave Nine the cinematography nod. People are even doubting that, and love or hate it was beautifully shot.