SHOCKTOBERFEST IS UPON US!

I started the festivities early last night with Hotel Transylvania, a flick that throws all the famous monsters together for a lavish party...a mad monster party, if you will.


In this case, it's the 118th birthday of Dracula's daughter Mavis. All's well and good until a human happens on the festivities, falling in love with the beautiful birthday girl while Dracula, proprietor of the titular hotel, tries to keep the others from finding out about the surprise guest. The all-star voice cast features Adam Sandler, Selena Gomez, Andy Samberg, Fran Drescher and Steve Buscemi (to name just a few), and the script provides the expected monster jokes, including their alternate versions of our human ways -- for instance, instead of "Do Not Disturb" signs, shrunken heads yell the words and order maid service. It's all quite clever!

Unfortunately, making those mad monster jokes is all the clever we can muster, and takes up a large part of the running time. Maybe the kids will love it in the theater -- although if the kids sitting near me were any indication, maybe not -- but they won't remember this film down the road. The stuff with Mavis works. We get the lesson about letting go and following your own path and loving who you love no matter who they are, and Adam Sandler and Selena Gomez do some admirable voice work. Also, it's the only time the film slows down from its breakneck pace. Otherwise, it's JOKE JOKE JOKE SETPIECE JOKE JOKE JOKE AHHH MONSTERS AHH HUMAN IT'S SO DIFFERENT IN THIS WORLD RIGHT RIGHT HUH? HUH? I mean, look, a lot of those quick gags were funny, but after a while it becomes clear that they're filler for a movie that just isn't there.

Obviously, I was reminded of the Rankin-Bass Mad Monster Party, and not just because of the general plot.


No, I was reminded because that, too, was a concept in search of a story. Characters didn't break out into song so much as they stumbled upon dirges, randomly dropped into the tale to lengthen what must have been a ten-minute story into a full hour. Hotel Transylvania is much the same way, only it doesn't give us any time at all to watch what's happening. Where Mad Monster Party lingers too long, Hotel Transylvania skips ahead before it's time. I laughed out loud, certainly, but it was equal parts compliment and incredulity.

The voice-work was great, though! And as a sidenote, I appreciated that they cast Fran Drescher as the Bride of Frankenstein, following Mad Monster Party's footsteps in giving the role to a beloved comedienne with a distinctive voice. Of course, Phyllis Diller had better lines (for whatever that's worth), but Fran! 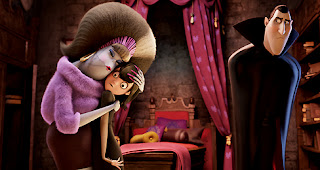 Before we sign off for the day, a few things.

First: You have spoken, and the results are in. And it should be no surprise: last year, this film came in second place to Rosemary's Baby, and no one at all voted for Don't Look Now or The Changeling. This year, everyone got at least one vote, but it was clear from the beginning: Poltergeist it is! Sorry, Friday the 13th, always a bridesmaid, never a bride.

Second: My best friend and I came up with the name Shocktoberfest in college....only to find out later that such term was already adopted by Stacie Ponder of Final Girl. So while you're celebrating Shocktoberfest with us, make sure you hit up her party, too! She's one of the best film writers out there, passionate and hilarious, with an appreciation of Charles Nelson Reilly.

Third: Remember to tune in tomorrow for the return of Casting Coup Tuesdays with Hush...Hush, Sweet Charlotte.

Play us out, Phyllis.

That Phyllis Diller figure is frightening and awesome.