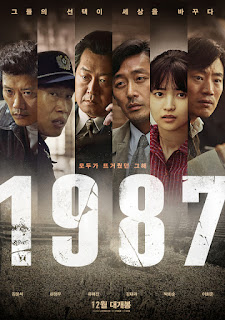 The moment I heard about 1987: When the Day Comes, I knew I had to see it. The film's plot - the true story of the suspicious death of 21-year-old student Park Jong-chul in police custody and its subsequent coverup - and the promise of a sprawling examination of the events from the POV of reporters, government officials, activists, and lawyers, brought to mind Costa-Gavras' incendiary Z (the 1969 film that also depicted the murder and coverup of a leftist activist). This is the event that, along with the Gwangju Massacre (depicted in A Taxi Driver) and President Chun Doo-hwan's deferment of direct presidential elections, led to the June Uprising demonstrations that helped bring South Korea out of the grip of military dictatorships and into democracy. I had to see it.

Alas, it was not to be. December 29th, I went out to catch the new release at CGV Cinemas...and was informed that for its first week of exhibition, 1987 would be exclusively screened sans subtitles. Fair enough! The same thing happened with The Fortress earlier this year, and Missing Woman the year before. Ah, well, so it would not make it to my 2017 Top Ten or Hollmann Awards, but at least I would be able to catch it a week later, away from the glut of movie screenings that the last two weeks of December tend to become, able to appreciate the film on its own merits. And this morning, I did just that.

My reaction, after the jump.... 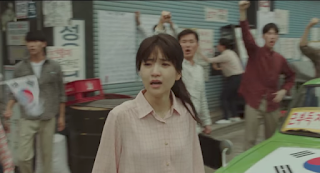 1987: When the Day Comes is vital filmmaking. With an epic-sized ensemble that sweeps up all levels of officialdom and citizenry, class and clergy, it shows us the true faces of democracy. Its recreations of Park's murder and the death of another student activist (no spoilers here, though it's easily researchable) avoid any gratuity or exploitation, but instead become pained wails for the losses faced in the struggle for justice and freedom - as well as invigorating jolts for the complacent among us. There is a wonderful moment where a college student, played by The Handmaiden's Kim Tae-ri, asks a student activist seeking to recruit her why he takes such a risk: does he want to die, too, doesn't he think of his family? He says nothing, but in that silence is the answer that Kim's character will eventually learn: it is for family...for the people you love...for Korea. Freedom is what they lived to see and died to achieve. 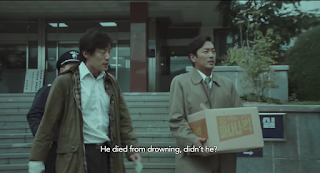 It is, perhaps, unseemly to allow oneself to get so carried away by a film without some sort of critical gaze, but as cinema does seek to provoke reaction, it proves success on the film's part. Director Jang Joo-hwan and writer Kim Kyung-chan don't scream these themes from the rooftops, but unwrap them patiently, taking their time with each character and every plot turn to give us the full picture of revolution in action and under siege - goodness, they even make a case for the single-minded ferocity of the film's main antagonist! 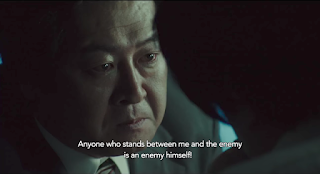 Even by the time the nation has united in a shout for democracy by film's end (a goosepimply shot of the mass demonstration drove many in my row to loud sobs), there remains the knowledge that this triumph is not the culmination, but another step; the film has ended, but the movement goes on.

1987: When the Day Comes is my idea of a perfect film. Which is why I am updating my Top Ten and revising the draft for tomorrow's Hollmann Awards nominations. I've avoided doing this kind of thing in years past because a deadline is a deadline - but since I impose the deadline, and this is my blog, I can do what I want! And it would be dishonest to claim to honor the Best of 2017 while leaving this aside.

Email ThisBlogThis!Share to TwitterShare to FacebookShare to Pinterest
Labels: 1987: When the Day Comes, 2017, reviews