The year is 1959. My parents are born. Berry Gordy founds Motown Records. The Clutters are murdered in cold blood. And the nominees for Best Actress are....

Notes: First and only nomination; Golden Globe Nominee for Actress in a Musical/Comedy

A world-class comedienne, Day proves game for sending up her good girl image as the brittle interior decorator falling in love and annoyance with Rock Hudson's playboy songwriter. It's not just that her readings are a hoot: she delivers a real, breathing person behind the one-liners without straying from the farcical tone. It's a performance that finds convincing room for both a lovelorn aria and sophisticated, silly shouting. 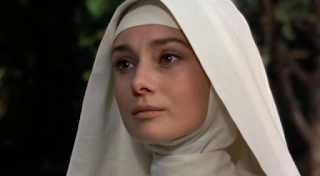 Another star persona put to perfect use. A frequently underestimated and often miscast actress, Hepburn is perfect here her fragile beauty a perfect canvas for spiritual conflict. She does not just play the honorable conflict either of nurse vs. nun, dedication to others vs. dedication to God - this sister is full of pride, her conscience tormented both when she showcases her confidence in her abilities and when she goes the humbler route. 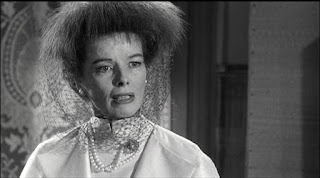 The most interesting thing in the movie, which is saying something considering the fate of her character's son. From the moment she descends in the elevator to her last shot going up in it, Kate commands attention, giving her usual crisp recitations a lolling rhythm that allows her to steamroll her co-stars with vague certainty. Her final monologue is hypnotic, haunting. This is her movie. 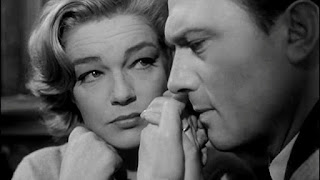 Simone Signoret in Room at the Top
***

After two viewings, I find myself liking this movie and its performances while I'm watching it and completely unable to recall any specifics afterward. I have an impression of a strong performance of a middle-aged woman connecting with another outsider, with Signoret underplaying through sultry, sleepy eyes throughout. She's great, I think. She's heartbreaking, I'm pretty sure. 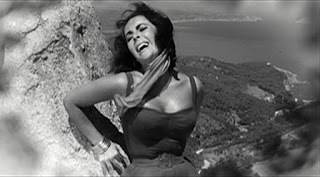 A lot of challenges to face here: walking a thin line between the "is-she-or-isn't she" question of her sanity without overplaying either; a very long climactic monologue which, if I'm reading reports correctly, she delivered in one take; the absolutely gonzo storyline. She does a great job with most of it, but even she seems at a loss for just who Catherine Holly is. More a device than a character, I believe she's in agony, but I don't believe she was ever in the situation that put her in such a state.


I wish I could co-sign, but alas for her, I must choose a previous Oscar winner, finally giving a performance that earned the gold.... 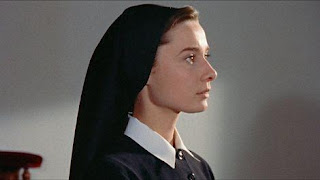 AUDREY HEPBURN
in
THE NUN'S STORY

I absolutely adore this year! Five wonderfully different performances and five amazing actresses and five movies I enjoy very much. How often that this happen? Not all of them are all-time best but they still offer something to treasure.

I have to say, I also needed some time with Simone - when I was much younger and started my Oscar-watching, she was actually one of my least favorite winners but over time I started to really love her subtle approache to this part. Still, what an unusual pick by the Academy!