Now that we've honored The Nun's Story for its lead actress and score, Porgy and Bess for its orchestrations, and Wild Strawberries for its screenplay, its time to let another film into the fold. And we'll do that by looking at the nominees for Best Supporting Actor, made of four first-timers, only two of whom would be back for more. 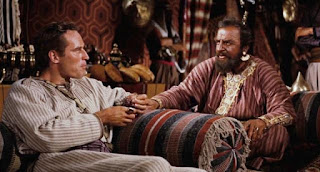 Notes: First of two nominations, first and only win; National Board of Review Winner for Supporting Actor

An unlikely winner, Griffith's Sheik Ilderim is just a dash less broad than you think it is. He has a fantastic scene where he entices Stephen Boyd's Messala to take a very rich gamble on the chariot race. And he's a good time entertaining Judah Ben-Hur in his tent, trying to get him to belch in appreciation of the fine dining. It's some welcome comic relief that goes beyond the dye job, but I'm still shocked this is the performance from Ben-Hur that got nominated. 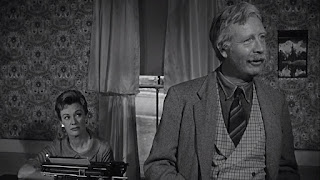 Arthur O'Connell in Anatomy of a Murder
***

Folksy alcoholic attorney whose arc from mess who can't get hired to unexpected hero of the hour plays more or less in the background, subtly. It helps that his second chance comes up within the first thirty minutes of the movie. O'Connell, to his credit, does not overplay a moment. Not the drunkenness, not the career rehab, not the chemistry with James Stewart: it's all natural. 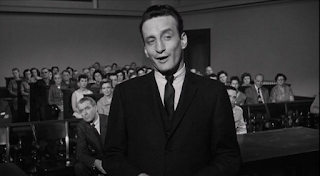 Much like the character, a performance that sneaks up on you. Quiet at first, with a respectfully condescending manner that grates - Scott even gives him an odd highfalutin' accent: something about his vowels sounds practiced, a great choice that makes Claude Dancer's distance from this small town even more deliberate. And when he fights, he fights hard: the sweaty, clobbering evisceration he attempts on Mary Pilant; the quiet, confident redirection he gives the local DA; his "embarrassed" manipulation of Laura Manion's rape accusations - this guy plays to win. 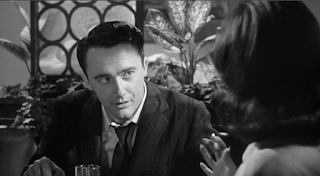 Robert Vaughn in The Young Philadelphians
**

Mind-boggling. How is this the sole performance to be honored by the Globes and the Oscars? He's solid, delivers witticisms with the appropriate drollness, plays pathetic drunkenness at the just the right pitch for this kind of movie, but that's it. It's not especially unique or revelatory - it just...is.

Ed Wynn in The Diary of Anne Frank
***

Notes: First and only nomination

Wynn is convincing as the oft-annoyed, doom-and-gloom dentist who can't stand the close quarters of the attic. He annoys you to the brink of insanity, but then there's this hopelessness in his slackened face and downcast eyes. He's our last hint of what's happening outside, and it's not pretty. Wynn, mostly known as a comic actor, delivers the goods.

Griffith benefited from the Ben-Hur sweep.


But I just don't see it. In fact, I only see one nominee that comes close to deserving the Oscar... 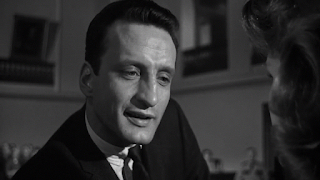 GEORGE C. SCOTT
for
ANATOMY OF A MURDER


In our next adventure, we'll look at Best Director: Jack Clayton (Room at the Top), George Stevens (The Diary of Anne Frank), Billy Wilder (Some Like It Hot), William Wyler (Ben-Hur), and Fred Zinnemann (The Nun's Story).