Meant to put this up last week, but I was struck down by an illness that kept me weak and in bed. Now, finally, the grand finale of the 1959 Oscars - Best Picture of the Year!

But soft - this ain't the end of 1959 just yet. I saw 63 films from this year (going by US release dates), so you know I have a Top Ten and some Retro Hollmann Awards on the way! Many of these films, while not up for Oscar, were nominated by other awards bodies throughout 1959, so make sure you check out every single category page, from Best Actress to Best Actor to this one, for brief thoughts on those.

Anatomy of a Murder
produced by Otto Preminger
*****

Truth, justice, and pride - can all three be satisfied? No! Justice isn't convenient, the truth is embarrassing, and your pride is just waiting to be taken down, whether you're on trial for murder, the daughter of the victim (who have been a rapist), or even the prosecuting attorney! Conversations about what is or isn't consent still resonate. A wicked sense of humor keeps things entertaining without getting tasteless. A real lean-forward, elbows-on-knees courtroom drama.

Spectacular spectacle! The chariot race, a rightfully iconic piece of action cinema, absolutely thrills - how did no one get killed? The galley sequence, where the rhythm of the slaves' rowing builds the suspense - what's happening outside? Only the drums know! The visit to the lepers, dark and haunting, a cave full of mazes, where the afflicted dare not even touch each other - spooky...and sad. Pure cinema that never sacrifices the personal - what other movie continues another hour after vengeance is satisfied, just to show the hollowness of the so-called victory?


The Diary of Anne Frank
produced by George Stevens
****

I demote a star for two reasons: (1) I try not to give the same star rating to more than two films (doesn't always work, but I try); (2) Millie Perkins is kind of a wash as Anne Frank. But oh my, the rest of this movie works so beautifully. Everyone is always on top of one another, despite the CinemaScope. Every sound seems to shriek. There's so much hope, so much love in this movie, despite knowing from the outset what lies ahead.

Admiring enough of the dedication of the brides of Christ, even while continuously highlighting how their religious servitude may be at odds with actual service in the earthly realm. Writ large in an epic-length examination of a nun, Audrey Hepburn's quiet struggle of the soul is a common one: most of us find ourselves unworthy of the values we uphold. An enriching experience, this movie.


Room at the Top
produced by John Woolf and James Woolf
***

It's a good movie capturing the disenchantment of the post-war generation in re-building England while still navigating the class consciousness of its society. So...why do I find it such a challenge to write or talk about it? Because it's straightforward? Because it's dreary? I don't know what it is that holds me at arm's length, but the distance is there.

Not necessarily in the conversation, but hey, they were cited as among the Best Pictures of the year somewhere:

Due respect to the actual winner, Ben-Hur.... 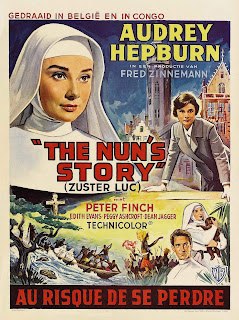 
The 400 Blows
Anatomy of a Murder
The Bat
Ben-Hur
The Best of Everything
The Big Circus
The Big Operator
Black Orpheus
But Not for Me
Career
City of Fear
Compulsion
The Crimson Kimono
Darby O’Gill and the Little People
The Devil’s Disciple
The Diary of Anne Frank
The Five Pennies
Gidget
Godzilla Raids Again
The Hanging Tree
A Hole in the Head
House on Haunted Hill
The Human Condition: No Greater Love
Imitation of Life
Ivan the Terrible, Part Two: The Boyars’ Plot
Journey to the Center of the Earth
The Last Angry Man
Li’l Abner
Libel
Look Back in Anger
The Magician
Middle of the Night
The Mummy
The Naked Road
North by Northwest
The Nun’s Story
Odds Against Tomorrow
On the Beach
Operation Petticoat
Pillow Talk
Plan 9 from Outer Space
Porgy and Bess
A Private’s Affair
Rally ‘Round the Flag, Boys!
Return of the Fly
Rio Bravo
Room at the Top
Sapphire
Say One for Me
The Shaggy Dog
Sleeping Beauty
Some Like It Hot
Suddenly, Last Summer
A Summer Place
Take a Giant Step
Teenagers from Outer Space
Tiger Bay
The Tingler
Verboten!
The Wasp Woman
Wild Strawberries
The Young Land
The Young Philadelphians

Email ThisBlogThis!Share to TwitterShare to FacebookShare to Pinterest
Labels: 1959, Anatomy of a Murder, Ben-Hur, Oscars, Room at the Top, The Diary of Anne Frank, The Nun's Story