My grandfather told me Chariots of Fire was a must-see movie. He and a number of other relatives urged me to obtain a copy and watch it, as it is wonderfully inspiring and spiritual and wow, what a film! 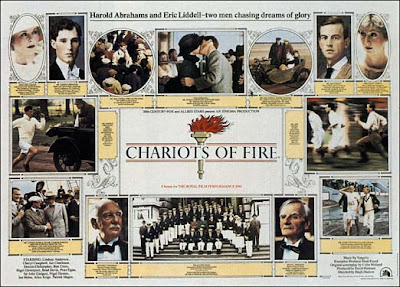 Well, I watched it. And it is an inspiring film, yes. And yes, the protagonists are a Jewish guy with a chip on his shoulder and a religious missionary, so I guess there is a spiritual side to it. Especially as two runners fall while the missionary is giving a Special Guest Sermon about pride and whatnot. It is a nice movie, certainly, with some great performances, especially by Ian Holm as a coach and Ian Charleson as the missionary and Alice Krige as the Jew's girlfriend.

But you know something? I don't remember anybody's name, except the American runner, Scholz. And he doesn't even show up until the last third of the film. Now, I know, the movie was good, and so what if I can't remember the names, etc. But if I didn't even try to commit them to memory, it tells me one thing: I didn't care. Like, it was delightful to watch, sure, but I didn't care.

I blame the director. His pacing felt a mite off. And I didn't really understand why we see the results of one race, followed by a slo-mo replay of the same race. What is this, House of the Dead? The editing and the sound were both bizarre, too. People speak when they're not on-screen, only to appear for a "reveal", but by the time that happens, they're done talking and I no longer care. The music at the end is off: one song cue ends, the scene is still going, so another cue comes in -- with a silence in between that is just awkward.And the damn slow-mo.

But hey, it has a kick-ass score by Vangelis that is distracting as hell. Synth against a 1920s setting? Interesting choice.

Go ahead and rent it. You could do a lot worse. It's a good movie with some great performances, but on the whole, it's a rather ho-hum affair. Ian Holm definitely earned his Oscar nomination, though.

(I see now that the Jew is Abrahams and the missionary is Liddell. And I still don't care. I really love Alice Krige in this, though.)
Posted by Walter L. Hollmann at 10:40 PM