Man, I swore up and down last year that I would never see this movie. Even as far as chick flicks go, it did not look like something I would want to watch. But, I had time, and HBO was showing it, and so I watched it. 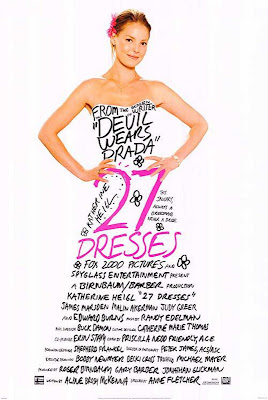 It's not perfect by any means, but it's serviceable. It's romantic and funny and pretty adorable, and there's a happy ending that's a little corny, but also feels triumphant and "right". It helps that the leads, Katherine Heigl and James Marsden, are insanely adorable (almost frustratingly so). Marsden especially is quite charismatic in the role of a cynical wedding columnist for The New York Journal who is secretly doing a story on Heigl's character, who has been a bridesmaid 27 different times.

Now, yes, it can be a little...I don't know the word I'm looking for exactly. Old-fashioned? I mean, there are frequent discussions of how opportunistic the whole wedding industry is, and how everyone romanticizes nuptials out of proportion, but this is usually written off as dishonest, as a smokescreen to cover the character's own vulnerability. It reminded me a little of Down with Love, where Catcher Block is determined to prove that all every woman wants is to settle down and marry, only playing it straight instead of as a parody/homage.

Malin Akerman continues to weird me out. She reminds me of Cameron Diaz, and I don't need more of that. Not that I hate Cameron Diaz, but when two women have that exact speech pattern? No. Stop. Much like her performance in Watchmen, she is sometimes wonderful, and sometimes just wooden.

But Heigl's a treat. Sometimes, she may seem a little more curt than her character is supposed to be, but otherwise she is quite believable in the role. And in spite of the machinations of the screenplay, the chemistry she and Marsden share is real. Heigl's performance reminded me of someone I know, so I can safely say that it is believable.

I'd watch it again. I would recommend it as a rental, something to watch with either a group of friends or the love of your life. Just not someone you're only casually dating. That would be weird.
Posted by Walter L. Hollmann at 10:41 AM

Its rom-com fluff but its really enjoyable and Heigl just carries the movie. She is a wonderful actress.