The Diary of Anne Frank

There are some movies that are better suited to a more intimate setting. A movie theater, say, or a living room with your girlfriend and/or best friends. A viewing station in the middle of the library is probably not the best choice -- at all -- but beggars can't be choosers, and they wouldn't let me check it out. Suffice to say, I found myself trying to avoid public hysterics while working through the emotional impact of The Diary of Anne Frank. 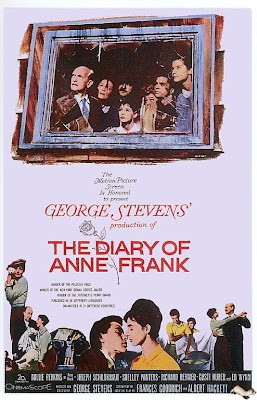 I trust we are all familiar with her story. Anne Frank was a girl in 1940s Holland who, being Jewish, hid away with her family in an attic. Having received a diary at the age of thirteen, she chronicled life in the hiding place for the two years she, her parents, her sister, a family of three, and a dentist stayed there. It was adapted for the stage and, eventually, the screen.

So, I know this is going to sound odd, but I was kind of reminded of Night of the Living Dead. A claustrophobic setting, a handful of refugees, uncertainty of the outside world. I know, I know -- this is fact, Night of the Living Dead was fiction, but still, it was interesting to see how in both cases, the inhabitants still get into major quarrels over the silliest of things. Or how fierce an unassuming mother can become. Or how young people still find time for romance. Or how, no matter how horrifying the situation, people can still cling to hope.

The film is quite tastefully done, never sensationalizing the story, shying away from melodrama. Millie Perkins has the title role; I've seen people play Anne Frank as a kind of contemporary Joan of Arc, but Perkins, fortunately, remembers that Anne was thirteen, and fills the character with the precociousness and confusion and "wisdom" of that age. Mind, she was about twenty during filming, so that she was able to take the role so seriously as to not take it seriously is quite an achievement (I find actors of that age group tend to "ACT" rather than play it as it lays).

She also happens to be incredibly beautiful.

I think I like the last bit the most. Anne and her beau Peter Van Daan (Richard Beymer, who afterwards met a girl named Maria) are upstairs, and she has just delivered the famous line about people being good at heart, when we hear the sirens getting louder and the Nazis busting in. And without hesitation, she and Peter kiss passionately for what they know will be the last time. God. I must have looked a mess. It was for this movie that Shelley Winters won her first Oscar for Best Supporting Actress. And I gotta tell you here and now, I love Shelley Winters. I had a mild crush on her when I saw The Night of the Hunter at the age of ten (or thereabouts). I own Alfie and Lolita. I saw The Poseidon Adventure in sixth grade just for her (well, OK, for Grandpa Joe, too). The Winters and I, we're palsies.

Which means I'm fully aware that she is a "shrill" actress. The woman is loud and brassy. She is typecast in the role of the whiny woman, the demanding mother that no one can stand. Watching her in Alfie is just bizarre, of course, but every time I see her on screen, I always think of her at breakfast with Sue Lyons ("Keep your table off the, ugh, ELBOWS OFF THE TABLE!") And truly, Petronella Van Daan could easily be another one of these. There are times when it seems she is about to do the Shelley Winters thing, going big when she needs to go small.

Which also means that, despite my love for The Winters, I often underestimate her. There is a scene at the beginning where she talks to Anne about boys. Anne asks her if she had a lot of boyfriends growing up, and although Mrs. Frank (Gusti Huber giving the Greatest Performance of a Mother Ever) admonishes her, Petronella replies, "No, I don't mind." AND SHE DOESN'T. By which I mean, Winters' eyes light up at the question, and she goes into details of her youth, and you can see her actually going there. Her nostalgia is both charming and sad, tinged the realization that she is not the woman she used to be. And as she shows off her great legs, there is a cry of desperation for a compliment, a glance even, anything! That Winters can combine both humor and sadness in one scene is miraculous, and so subtly done, too.

Petronella's mink coat gives us two great scenes. One is where Petronella lets Anne try it on, gushing about how it was a gift from her father. It is clearly the most precious thing the Van Daans own, and Winters glows with pride. When Anne spills milk on it, SNAP goes Petronella, and Lord have mercy, I had no idea anyone could that fast. And instead of playing it angry or bitchy, you can actually hear Winters' Petronella choking back tears as she runs foggily upstairs. Later on, her husband (Lou Jacobi) goes to take the coat to sell, and Petronella tries to fight him for it. She loses, and sinks on the bed in defeat. Bam. That's it. That one shot of The Winters sitting with her head bowed is enough. Throughout the film, we see the woman go through all sorts of humiliating moments, but for me, this is the one that sticks out. The love of her father and her own pride were both wrapped up in that stole, and in many ways, it was the only thing she had left of either. When it goes, so, too, does much of her hope. She even looks smaller.

I love the little moments like that. I love when Anne comes back from Peter's room, having received her first Real Kiss. She kisses everyone in the living room good night as she floats to her bedroom, pausing even to kiss Petronella, Peter's mum, on both cheeks. And in reply, Mrs. Van Daan gives a little smirk: "Uh-huh." And that's all anyone says or needs to say. Winters' delivery of that line is so incredibly perfect. Really, in moments like that one, or in talking about the boys, she reminded me of my roommate's mother, who is like my other mother (but not the Coraline kind). And I feel that if you can watch a performance and say, "Holy crap, that is SO whats'ername" then the actor has done their job. They have given you a real human being. So, Shelley Winters, here's to you.