Today, I started on that crazy, kooky adventure known as Smackdowning. Having signed up for StinkyLulu's Supporting Actress Smackdown of 1959, and with so little free time on my hands, I used what moment of leisure I had to catch a rom-com that I've been wanting to for ages. It won the Oscar for Best Writing, Story and Screenplay - Written Directly for the Screen, which was the 1959 way of saying Original Screenplay. And it's a fun gem, too. 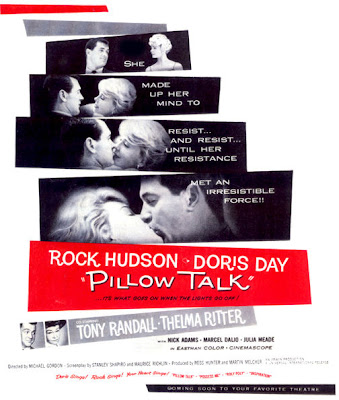 The movie itself is awesome. Some naughty bits here and there with that split-screen, and those innuendos make me envy the talent of the writers. "A man with his own mountain doesn't need the city." Tee-hee. "Not every man finishes a sentence with a proposition." Ha! "I never met a boy with so many arms." Oh, heavens!

Rock Hudson is great as always, playing a New York City playboy (Brad Allen) posing as a Texas farmboy (Rex Stetson) while also getting a chance to "play" gay. Doris Day was Oscar-nominated (rightfully so) for the role of interior decorator Jan Morrow, and Tony Randall -- well, if ever there was a character based on me, this would be one of them, and he plays me beautifully. Great job!

A catchy title tune, a few songs in a bar, and even a musical interlude that takes place entirely within Doris Day's head (!) are all very well and good, but they do get kind of distracting. As does a running joke involving an obstetrician's office, a joke that is a little "Ehhhhhh," to quote August: Osage County.

Meanwhile, there is the question of the Oscar-nominated performance of Miss Thelma Ritter, here playing the role of Jan's maid, Alma.

And I gotta tell you, it's a puzzling nomination. 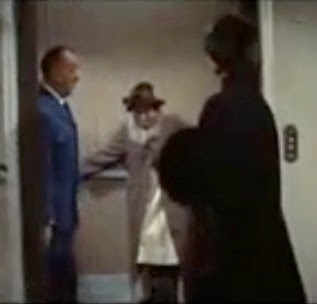 This is how we meet Alma: struggling to stay on two feet while nursing a hangover. The elevator operator is concerned, Jan seems to be taking it in stride, and Alma is on her way to do the cleaning. End of first scene. We barely even get to see her face.

In fact, we barely get to know anything about Alma at all. We know she's an alcoholic, we know she listens in on Jan's phone (she shares a party line with Brad, and Alma finds his wooing of the many ladies in his life intriguing), and we know that she cracks wise. I guess. 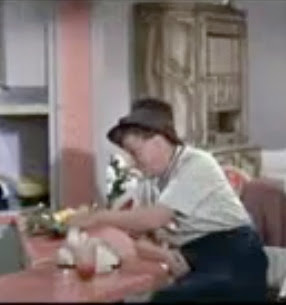 See, I like Thelma Ritter. I thought she was wonderful in Miracle on 34th Street and Rear Window, and in Titanic, she was all I noticed (until we turned off the movie, as it was late and it was a school night -- this is going back twelve years or so). When I know she's in a movie, I'm ready to settle in and let the adoration flow.

But this...this isn't anything. The role, I mean. And I can't decide if Thelma's doing nothing or doing everything. On the one hand, she looks bored to tears; on the other, this could be a very shrewd portrayal of a sad, lonely woman who can only gain joy from living vicariously through the telephone and drinking herself into a stupor night after night. Which is intriguing, and if this is what she meant to go for, than it's a very subtle, good performance -- that is out of place. 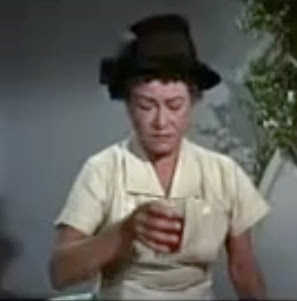 I mean, I hate to limit the tone of a film, but this is a sex comedy. Tony Randall is practically overselling it, but it works. Rock Hudson and Doris day are having a dandy good time. Everything is frothy and fun, and then: this. A sad drunk. Every time she showed up, she slapped me in the face with both her lonely presence and her 1959 attitudes:

ALMA: "If there's anything worse than a woman living alone, it's a woman saying she likes it."
JAN: "Well, what am I missing?"
ALMA: "If you have to ask, you're missing it!"

Thelma Ritter scenes should not be the only ones in which I don't laugh. In fact, as I recall, there was but one bit with Alma that I enjoyed:

Brad goes to Alma for advice on how to win back Jan. He decides to take her out for drinks, and after she directs him to a much better bar, there's this shot. Alma is still sitting up straight, and the scene is just her divulging a plan as Brad wearily tries to keep afloat. But the biggest laugh from this scene comes after it, when Brad recounts to his friend, "I made it through a bottle of Scotch, but I lost her during the Vodka." Or something like that. Anyway, it was hilarious, but it was said after she was out of frame.

This was one of six nominations Thelma Ritter received from the Academy, all for Supporting Actress. And there are some actresses that are default nominees (Ritter), who sometimes give performances that wouldn't be noteworthy if it wasn't for the actress and the film. This is one of those times. I wish I could have loved Thelma Ritter's Alma more. Maybe in another movie.