Room at the Top

Room at the Top is one of those odd little treats, an independent British film that somehow managed to hit it big with critics, audiences, and awards groups in 1959. It starts off kind of odd, but after about fifteen minutes, I found I could not tear my eyes from the screen. 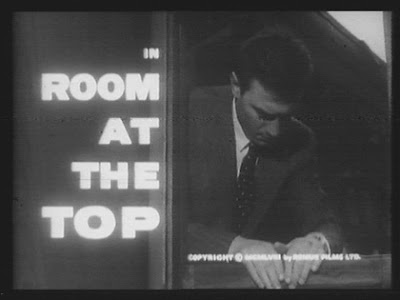 The film revolves an accountant at the Town Hall, a Mr. Lampton (Oscar-nominated Laurence Harvey), with dreams of shucking his life as a working class schmuck in favor of a life of riches. This leads him to pursuing Susan Brown (Heather Sears), daughter of a city councilman, the richest man (best-in-show Donald Wolfit) in the county. At the same time, he falls for a woman in the community theatre, a married French lady named Alice (Simone Signoret, who won the Oscar for her role). And, of course, it's the struggle between the classes and love and all that jazz.

But it is a very intriguing piece. It's very talky, and it really is a very basic plot. It kind of reminds me of the work of Nathanael West, in that it is simple, angry, pessimistic, and kind of episodic. And yet, it is suspenseful. I know I'm into a film when I'm watching it on the computer, by myself, and I still shift everything around so I can sit on the edge. Will he pursue the girl? Leave with the wife? Gain the trust of Mr. Brown?

Everything unfolds in a rather realistic style. There are so many moments when it could become melodrama, but the restraint of the director and actors keeps it real. Simone Signoret especially is dazzling to watch as the tragic Alice, a performance that breaks your heart and makes you fall in love. You can see the attraction Lampton would have for her, despite her being ten years his senior.

I liked how flawed Mr. Lampton was, too. I wanted him to succeed, certainly. I kept rooting for him to save his honor, but to also pursue his heart. All this despite the fact that, in all honesty, he's a bit of a dick. Like, big time. Logically, there is no reason why anybody should like this guy, what with the chip on his shoulder, forward manner, and moral hypocrisy. I think it speaks to the power of the performance and the screenplay that we still care.

That's all very well and good, but what of the Supporting Actress Nominee from the film? Hermione Baddeley holds the record for shortest nominated performance, ever: 00:02:32. Let me repeat that. Hermione Baddeley was nominated for an Academy Award for appearing on screen for two and a half minutes. That is 2% of the film's total running time. Geez, and I thought Thelma Ritter's Pillow Talk nom was bizarre. This is barely a cameo! 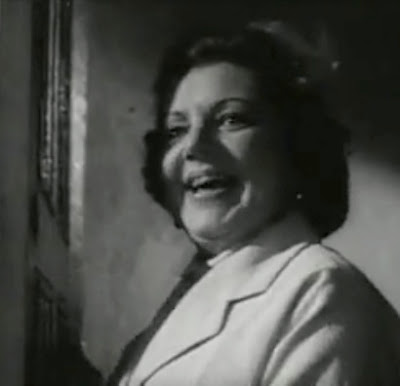 Baddeley appears four times, the bulk of her performance taking place in her first scene. She plays Elspeth, who lends her apartment to Alice and Lampton for their rendezvous. Elspeth is a music teacher, I believe, and we first see her as she sweeps into her apartment, apologizing to the lovers before settling herself in. She seems boisterous, your typical cockney lady, until she sits at the piano. Out of earshot of Alice, she expresses concern to Mr. Lampton, asking him not to hurt her friend. "She loves you," she proclaims. "She doesn't know it, yet, but she does." 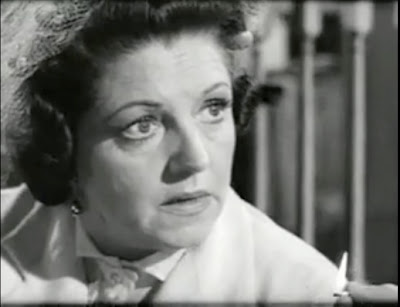 I love this scene. It is such a short exchange, with dialogue we've heard a hundred times before in other films, but I love Baddeley's delivery. I love that she gets up close so we can see the lines in her face. I love how weary she looks as she's talking. I love that she already foresees disaster and is just going through the motions.

The rest of her scenes are the basic stuff: Supportive friend at the piano, screaming at Mr. Lampton at the end, her reactions at the wedding. But it's that first scene that has all the meat. A worthy performance. It's just a shame that they couldn't nominate Heather Sears, whose portrayal of Susan is exciting to watch. She seems like a sweet, innocent virgin, but if you try to cross her -- WATCH OUT. And (SPOILER ALERT SPOILER ALERT) her afterglow after her first time is magnificent. "I don't feel any different. Do I look different? I don't feel different."

Anyway, Baddeley gives a brief turn, but it's effective. In just two minutes, we see the sad history of disappointments that Elspeth has experienced, as well as the weariness that comes with being Alice's bestie for the restie. And that final breakdown -- screeching cat one moment, confused little lady the next. Powerful stuff, making more out of her two minutes than Thelma made with her six or seven.