THE AGE OF INNOCENCE 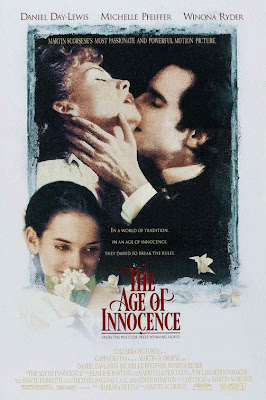 I always think I'm going to love this movie. After all, all the ingredients are there: actors I love, a director I respect and admire, a period piece romance. Hell, even though I've not read the source novel, it was written by the author of Ethan Frome, one my favorite books ever. How could this go wrong?

Alas, the trouble here is the trouble with Martin Scorsese's other New York period drama, Gangs of New York. So much is spent on the visuals, the production values, the costumerie, the insistence on epic scope, that in the end, it is too in love with what it's critiquing to satirize it properly. Ah, yes, the intentions are noble, bringing the novel to life while still maintaining the lush language within. But at what cost? Is it so necessary to have a narrator read passages from the book when all it does is distract? If it is to provide context or commentary, then I'm sorry, but you have failed as a filmmaker. If you cannot illustrate your thesis without Joanne Woodward's gently ironic voice describing a fucking ballroom, back to the drawing-board.

The film is also a victim of tedium. At two hours and nineteen minutes, it feels like a three-hour epic. It. Just. Drags. On. And no one is doing anything interesting. Daniel Day-Lewis, whose praises I just sang in the previous post, bores me here, and feels miscast. Michelle Pfeiffer seems distant, so that I don't really "get" the love story. And they're trying, certainly, but they just aren't doing it for me.

Have I mentioned before how much I want to strangle Thelma Schoonmaker with the film negative? She is so rarely satisfying. Here, she dissolves and dissolves and dissolves, and I don't know to what end or for what purpose. I just see a bunch of transitions that do little more than showcase the production values. I really don't need this AND Joanne Woodward to get a sense of the materialism of these people, of this time, of this place. I'm not an idiot. Idiots don't see movies like The Age of Innocence, so why worry about them?

Well, as you can probably guess by my declaring Amy Adams the Best Supporting Actress of 2008, I have a soft spot for incredible actressing in films that just miss the mark (Fortunately, when Doubt misses the mark, it becomes high camp and therefore a must-buy). And so the twice I have seen The Age of Innocence, I am consistently blown away by one of the few actors in the film not horrifyingly miscast. 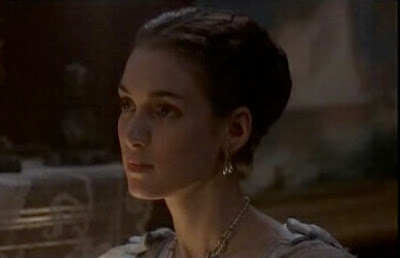 Winona Ryder may have been my first celebrity crush, but I assure you that this does not bias me in the least. I mean hey, I'm not exactly prepared to heap acting honors on Jennifer Love Hewitt, and I am determined to hit that. The truth is, Winona Ryder is...perfect. In this movie, I mean. As Newland Archer's fiancee/wife, May Welland, she is at risk of suffering from Melanie Hamilton syndrome: too sweet and charming and kind to not throttle violently. Ryder avoids this deftly by giving us an intelligent young woman who plays the game of Society better than anyone in the room, taking advantage of the "pretty little head" stereotype to work through her difficulties with Newland.

And when I say "work through", I mean she is clever in her manipulations. Always playing the innocent, May uses Newland's untainted image of her to get him to remain faithful to her.

There is a scene where Newland springs a trip to Washington on May. He gives this excuse about patent papers, and she waves it away, declaring it to be too complicated for her. Then she suggests that, while in town, he drop in on her cousin, the woman he happens to secretly desire. And for the first time, she looks at him, and smiles innocently - but not with her eyes. It is a challenge, masterfully played, a look that says, "I know. And I trust you. Can you handle that?" Solid work. 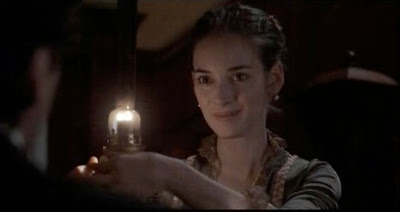 I miss Winona. Someone needs to get her into another Oscar picture soon. I mean, not a conscious awards target like The Age of Idiots, but...you know...something. Star Trek was a step in the right direction. Maybe Woody Allen could use her again. Or Quentin Tarantino. I'm just spit-balling.

The gist is, Winona Ryder is probably the best thing about the movie, followed by Miriam Margolyes, then the costumes. She is sweet and manipulative, but not in a cruel way. The fact that May knows the whole time and says nothing...that's love, baby. And with Winona, we believe every second of it.

Yikes. Harsh on Scorsese. Wrong!!! Agree on the goodness of Winona though...so you're excused...kind of.

I'm harsh because I love. The man's a genius, but this movie is just DULL.