How long has it been since I actually reviewed something? It feels like forever. Less talky, more review-y:

Oh, heavens. What to say about Adam, the tale of a young man with Asperger's who falls in love with his neighbor? Well, Hugh Dancy gives a pretty good performance in the title role, and Rose Byrne isn't terrible when she's acting without words. Amy Irving and Frankie Faison are pretty good. Overall, though, the movie is pretty awful. It doesn't want to be a rom-com with Asperger's as a device. Grand. But the road to hell is paved with good intentions, and surely there is nothing more agonizing this year than watching Adam.

Peter Gallagher's performance is a step above community theater. Adam is frequently lit like a serial killer stalking his prey, which is just unsettling. The songs are irritatingly on the nose, describing the action of the story in a clunky, literal way. How did they actually find songs to match exactly what everyone in the audience should be thinking and feeling? It's almost a coup! God, and some of the lines are horrendous. Just horrendous. "Loving, my precious girl, is what matters most." And holy crapping crap, they can't even get the lead female's name right. Gallagher calls her Bethany, loudly and clearly, in one scene; later, it is revealed her name is Elizabeth. WHICH IS IT, MOVIE? Writer-director Max Mayer has just joined The List -- the list of people to take by the shoulders and shake violently. 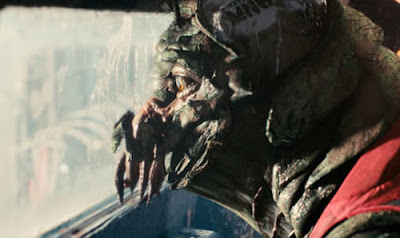 Interesting, intelligent sci-fi centering around the attempted relocation of prawn-like extraterrestrials in South Africa and the effects thereof. I think it only takes place over the course of three days (I think), and the pacing on this thing is impeccable. Yes, it is edge of your seat excitement at its best. It's best to go into the film with as little knowledge as possible. Certainly, I went in almost blind and wound up falling for it. I just want to point out three things: (1) Sharlto Copley gives a fantastic performance, (2) the visual effects are outstanding, far more convincing than VFX on more expensive productions, and (3) director/co-writer Neill Blomkamp has proven himself a force to be reckoned with. 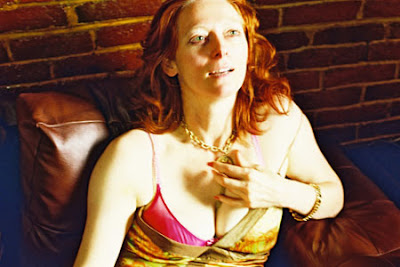 An interesting piece starring Hollmann Award nominee Tilda Swinton (The Curious Case of Benjamin Button). She's an alcoholic who kidnaps a boy at the urging of his delusional mother. Julia hopes to benefit financially from this, but her lack of skills in this department, plus her need to drink, drink, drink, take the film down various roads that eventually lead to Mexico. Through it all, Swinton is sublime, with a perfect American accent, and an understanding of the ego and folly that is the drunk. It's a top-notch performance in a bizarre little film.

Some of the twists and turns of the screenplay seem to serve mainly as a way to keep the movie going for another ten or fifteen minutes, instead of progressing with a natural fluidity. I found myself questioning the why and the wherefore of many scenes, including the abrupt and ambiguous ending. Worth watching for Swinton (what isn't?), but an overall meh film. 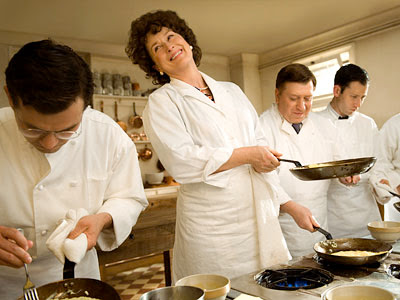 Oh man, if only this was a follow-up to the above flick... By now you've read how kick-ass Meryl Streep's channeling of kitchen guru Julia Child is. You won't be reading otherwise here. She's funny and endearing, yet there is unexpected depth in her turn here. Yeah, it's La Streep, but last year was kind of a two-punch of insanity and scenery-chewing. Here, we get a real person -- though she does seem bored during the television segments. Julia was a heavy breather and took her time, but she also had an exhilarating joie de vivre that reached out to the viewers at home. It's the only misstep in a brilliant performance.

Ah, yes, but there is more to the film than La Streep. Amy Adams does a fine job as Julie Powell, a present-day blogger who cooks her way through Julia's Mastering the Art of French Cooking. It's not an easy character, to be sure: while the real Powell is full of snark and bitchery, writer-director Nora Ephron tries to make her...you know...nice, but still with a cool edge to her. It doesn't completely gel. Chris Messina and Stanley Tucci play Julie & Julia's respective husbands, and are just great. Messina is shaping up to be one of the most reliable Everyman actors working, and Tucci...holy crap, Tucci. Tucci and Streep have a chemistry that practically demands remakes of Who's Afraid of Virginia Woolf?, The Thin Man, and (if this was twenty years ago) It Happened One Night. Now, these two gel, and their husband-and-wife routine is so natural, you'd think they were married off-screen. Jane Lynch, Joan Juliet Buck and Linda Emond also offer magnetic supporting roles as Julia's sister, teacher, and co-author.

The food is scrumptious to stare at, particularly the sole meuniere that opens the film. Costumes are beautiful, so that's always a treat. Alexandre Desplat's score is whimsical and delightfully simple, with the standard "Time After Time" (not Cyndi Lauper, alas) as a key theme used throughout. I guess the same can be said for the most of the film -- it's fun and sweet, but it's never TOO lit, TOO written, TOO art directed. Everything plays naturally and realistically, and coming from the director of Bewitched (the cinematic equivalent of water-boarding), it's a huge relief. 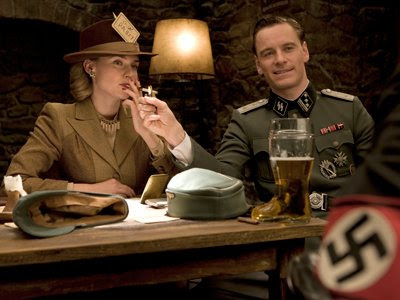 Suspenseful, funny, touching. Quentin Tarantino never ceases to surprise me. An ensemble flick centered around the theme of revenge and the effects of the Second World War, Tarantino offers neither blessing or damnation on the actions of the sadistic Basterds, a group of Americans hell-bent on revenge against the Nazis. It's interesting, since they do not distinguish between the officers who give out the orders and the grunts who merely fight a war for their country. I do not find this to be a negative, mind you. Rather, I see it as another layer to a surprisingly complex film. Everyone assumes they are the only ones capable of bringing order and balance to the world -- the Basterds through the systematic extermination of Nazis, Colonel Hans Landa (holy crap Christoph F'n Waltz) through the systematic extermination of "inferior" races, Jewish refugee Shoshana (Melanie Laurent) through a fortunate opportunity for revenge. A particular dinner scene underlines this intriguingly, with two opposing forces finding themselves dining with their prey. Incredible.

And it's all served up with Tarantino's usual talkiness, references to old films, and unrelenting violence. What, you thought you were going to be spared the horrors of a scalping? Fuhgeddaboutit. Mind, when one of my friends pointed out that a number of plot points and scenes were lifted almost verbatim from the Kill Bill films, I was a little disappointed, but Woody Allen's been ripping himself off for decades, and he's my favorite writer. I can forgive Tarantino, especially for the intriguing new interpretations he gives to some of these details. No, if we are to talk about a problem with his writing, it's the constant talking. I left for seven minutes (I was holding it for an hour and a half, for God's sake!) and missed nothing. Nothing. Three people were in a room, I left, I came back, they were still there. Hey, Sally Menke, you're the editor...EDIT.

Standouts in the cast include: Christoph Waltz as Col. Landa, aka The Jew Hunter; Melanie Laurent as Shoshana Dreyfuss; Diane Kruger as German actress/spy Bridget Von Hammersmark; Eli Roth as Sgt. Donny Donowitz, whose eyes tell it all; and Michael Fassbender as British spy Lt. Archie Hicox, who is very British.
Posted by Walter L. Hollmann at 4:10 AM