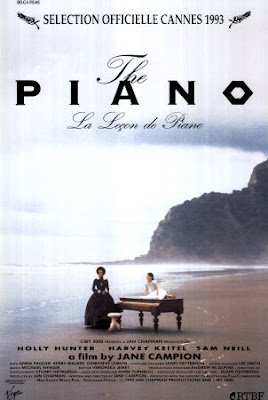 I don't know what to say about The Piano. It was beautiful and unlike anything I'd ever seen, I know that much. I know this was some of the best acting I've seen in a film. I also know, however, that I probably was not in thr right frame of mind when watching it. I was on a Bright Star high, and it was folly of me to approach a new Campion so immediately.

I think what I find so bizarre is the relationship between George (Harvey Keitel) and Ada (Holly Hunter). It's supposed to be a love story, isn't it? And yet I see what George does as manipulative and disgusting. Oh, yes, it's very neat to open the mute woman to carnal pleasures...but presumably she would already know what that's like, right? She has a daughter, after all. Is it George's approach? I don't understand what I'm supposed to be feeling, because I feel like "sketchy" isn't what Campion was going for. 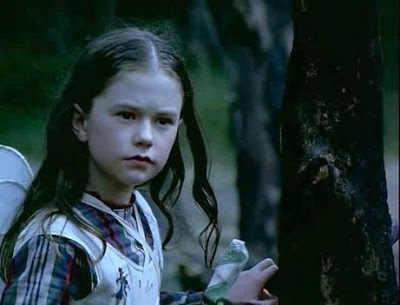 Anna Paquin won the Oscar for her performance in this film. She is quite good, certainly. It is nice to see a mostly unmannered performance from a young girl. Paquin takes the girl from devoted child to Judas, and it is believably played. Because the girl is jealous of George, right? Or is it that she's just a mischievous, devilish child? Paquin plays her as the kind of girl who starts things out of boredom, cunning and well aware of what kind of damage she'll be doing. Perhaps my problem is with the script: I just don't believe she would betray her mother the way she does. Certainly it would help if they built on the relationship between her and her stepfather...but alas, no.

Damn, I think I'm going to have to see this movie again. There's a lot I really didn't understand, and I don't know if it's my memory or if Jane Campion just didn't provide simple answers. And that's cool to keep things complicated and ambiguous, but I also don't like feeling like things happen just for the sake of happening. I know a lot of people love the film, but I don't understand the attraction between George and Ada, I don't understand why the daughter can be so evil; the only person I can really relate to and understand is Sam Neill as Ada's husband. So...at least Campion didn't turn the role into the stock Jealous, Controlling Husband.

This is a movie to look at when your mind is completely empty. It's really large in an emotional sense. You raise some astute points about Paquin's performance and character.