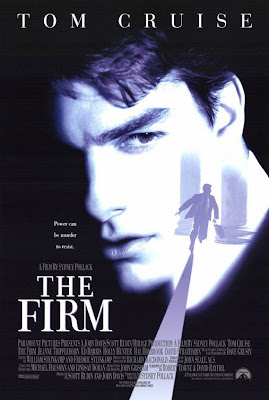 It's hard to take this movie completely seriously after seeing The Informant!. Tom Cruise plays a young lawyer who joins a firm with a dark secret...one they are willing to kill for! It's one of those movies where you know the DVD summary has exclamation points after every sentence. Because it's a THRILLER full of SUSPENSE and ACTION!

Well, hell! I had fun! What I've learned from watching John Grisham movies (because I've never read his books) is that they operate on the ridiculous, on high fives and America and sexy lawyers! And I can totally roll with that. Besides, my girlfriend's future brother-in-law is in law school and looks like Tom Cruise, so I feel like I'm not supporting him if I don't give the film my approval.

I mean, come on. Gene Hackman and Hal Holbrook and Wilford Brimley are there to give the class act. Tom Cruise and David Strathairn arrive for sex appeal. Gary Busey is terrifying. And, of course, we have our strong, brilliant women: Jeanne Tripplehorn, who, playing Cruise's wife, has to recite aggressively heavy-handed lines imaginable; and Oscar-nominated Holly Hunter. 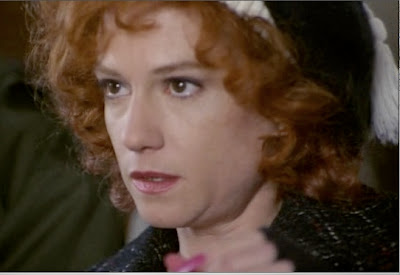 Holly Hunter has a teeny tiny role as the Tennessee gal who helps Cruise's character out with taking down the Firm. The role itself isn't much, but she's a hoot. With her hot-pink press-ons, rainbow of wigs, and DSL, Hunter is as sexy as she is great to watch. And yeah, her proclivity for oral sex saves her life, and sure, her outfits are all about titties, titties, titties (and legs, too), but she's so much more than just the dumb sexy girl. For one thing, the character helps bring down a group of powerful, wealthy men, and it's to Hunter's credit that we never doubt her street smarts. From early on, she lets on that she's got as much brains as she does boobs. Let's not forget: she approaches Cruise, and her terrified determination to see justice done is fascinating: shaky hands, set jaw. Hell yeah.