Supporting Actress Smackdown '93: In the Name of the Father

IN THE NAME OF THE FATHER 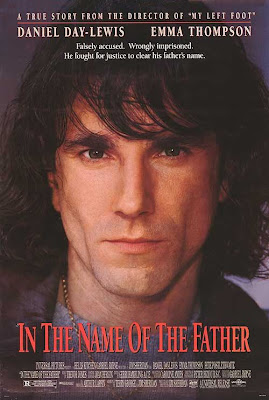 After a second viewing, I'll stick with my first impression: although a little long, it's a great movie. I am not resistant to the incredible force that is Daniel Day-Lewis, who plays wrongly accused prisoner Gerry Conlon with violent emotion. It's a great role that Day-Lewis sinks his teeth into, sometimes irritating, sometimes heroic. He's great at characters that are both frustrating and sympathetic. Hell, if he can make me love the amoral villains of There Will Be Blood and Gangs of New York, his work as Gerry Conlon seems almost child's play. But please, don't be fooled into thinking it is. It's goose-pimply.

If there is a flaw with the film, honestly, it's in its portrayal of the prison. We are told that Gerry and his father Guiseppe (Pete Postlethwaite, channeling everyone's father brilliantly) are with "the worst of the worst", yet except for a sadistic yet charming IRA leader, everyone seems pretty chill, throwing snowballs and listening to Bob Marley. I'm always concerned when films portray prisoners as no more menacing than the school bully that you wound up befriending come high school. It sends the wrong message, and while I know that this a story of a corrupt legal system...come on. Not everyone in that prison is an innocent man.

Truth be told, I think I might have liked this movie more if it focused on the trial more than the prison aspect. In both trial sequences, I found myself more interested and invested than anywhere else in the film. I guess that's just personal preference as far as genre goes. 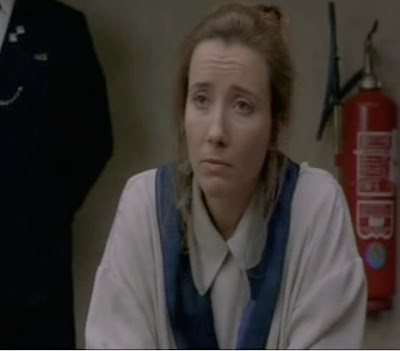 The supporting actress here is Emma Thompson, fresh off her Best Actress win for Howard End. Thompson is given a character who could very well be a cipher. She's the lawyer working with Guiseppe for an appeal, who must convince the angry Gerry to have faith and cooperate, and who, of course, gives a rousing speech in the climactic courtroom scene. Such a role is fairly easy to fuck up, as it could easily become too preachy or too motherly or too lawyer-y.

Thompson, instead, goes with bad-ass. She can keep her cool, but when her emotions get her, they go whole hog. Oh, but she's not prone to outbursts. No, no, Thompson, as Gareth Peirce, plays it cool with the big boys, rarely letting her guard down. Consider her first scene with Gerry, where she sits coolly, allowing him to finish his "hardened prisoner" routine. Awesome, awesome stuff. And I love how there is no "build" to her yelling in court, but an outburst of disgust and incredulity.

She may have the least amount of screen time of the three leads, but there is so much Thompson has to pack into her character, and she does it. The actress is always a treat to watch, and it is no different here than in Love Actually. Great work, as always.

Email ThisBlogThis!Share to TwitterShare to FacebookShare to Pinterest
Labels: Emma Thompson, In the Name of the Father, reviews, supporting actress

Glad to see the love for Emma.