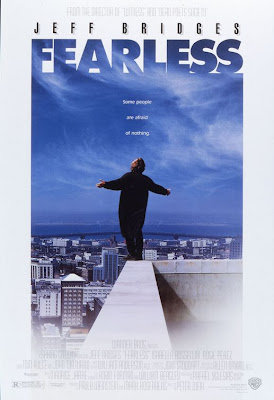 So, Max Klein (Jeff Bridges) survives a plane crash and suddenly fears nothing. Having saved twenty fellow passengers, he is looked at as somewhat of a hero. And, indeed, he himself appears to be convinced of his own divinity, especially since he is the only one who can reach out to grieving mother Carla Rodrigo (Rosie Perez). Despite all the good he does other people, however, Max also alienates himself from his family, makes reckless decisions, and generally freaks a lot of people the hell out.

As a whole, I like the movie. It's almost two hours, which I felt was a little long, but Bridges carries the movie throughout. I mean, when he's onscreen. The problem: you get so caught up in his character, whole scenes without him become jarring. This was especially a problem in a scene wherein a PTSD specialist (John Turturro) has a session with the survivors of the plane crash. I understand the need to build on where Perez's character is mentally and emotionally, but the scene goes on for a long time and just feels out of place. To me, anyway.

There are weird elements like that scene throughout Fearless. I want a movie about how Bridges is effected by the crash, about the relationship between him and his wife (Isabella Rossellini), about him and Perez reaching out to each other. I get that most of the time, fortunately. But there is also a caricature of a lawyer, expertly played by Tom Hulce, but an awkward fit for the movie. Benicio Del Toro (young, mustachioed Benicio Del Toro) plays Perez's husband, who uses the death of his baby son as a way to get more money out of the insurance company. And I understand these people exist in real life, but they really felt too simple for a movie like this. Really, Fearless is too good a film to offer underdeveloped characters. 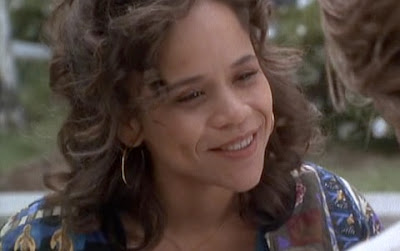 Then there's Rosie Perez as Carla. It's not that Perez is bad in this. She's not even just okay. She's really quite good here, and I generally like her to begin with. But there's something missing. She goes from grieving mother to Max Klein's best friend. There is a weird moment of tenderness between them that she rebukes, and there is a moment where she breaks down in his car about her baby. There's also a sequence where she plays with him in a toy store.

The difficulty with judging a performance like this is that I've never been through anything traumatic, nor do I have much experience with people who have, so maybe it's just my ignorance saying this. But here it goes: it isn't organic. Perez and director Peter Weir have not found that logical arc that brings Carla from Point A to Point B. Perez gets each scene individually, but as a whole, I don't feel Carla Rodrigo consistently enough.

Who should've gotten the nom? Isabella Rossellini as worried wifey Laura. Typical character for the category, sure, but I could not take my eyes off her whenever she was in the room.

I guess Rosie won't be winning. I gave this the same rating as you. I know I'm supposed to love it...but I don't. I don't really like the film either.