I don't quite know what to think of The Black Dahlia, Brian De Palma's curious 2006 adaptation of James Ellroy's novel. I give Josh Friedman props for trying to simplify the self-indulgently complicated source material. And certainly Vilkos Zsigmond's cinematography is deserving of its Oscar nomination, evoking as it does the films of Hitchcock -- and certainly everything is done to make Scarlett Johansson resemble Kim Novak. It's Brian De Palma's usual wackiness, and indeed, despite not knowing what the hell was going on (and I read the book, for Chrissakes), I was having a good time.

But those last ten minutes are hell. Too much information is thrown at the audience too quickly. At just two hours, the film carries the stench of Over Editing. Watching it with a group of friends last night, we were all bewildered at random transitions, unexplained events, characters that were introduced and then forgotten about, and subplots that did not get the full-bodied treatment they deserve.

What suffers most in this instance is the running thread of obsession. The whole reason Josh Hartnett begins an affair with Hilary Swank in the film is because of his growing obsession with the Dahlia, yet there is little to support this. What, he watches one screen test reel and suddenly he's schtupping some high-class brunette? Get outta here.

Another problem with that plotline, of course, is that Swank's Madeline Linscott is supposed to look like Mia Kirshner's Black Dahlia, aka Elizabeth Short. 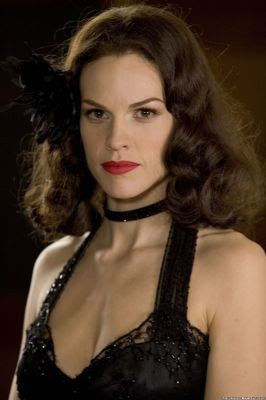 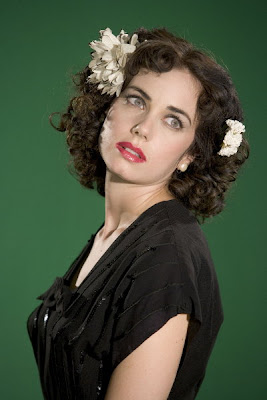 I guess they're both brunettes. Other than that, I see nothing similar between the two. Not the eyes, not the shape of the face, not even the same haircut! Apparently, Swank got the role after Fairuza Balk and the superb Eva Green (who would've rocked the role) turned it down. I don't understand the line of thought that leads to casting the physical opposite of all of these girls. It's a clear case of choosing the NAME before the TALENT.

It's a shame, because the actors are giving it their all, but they're floundering. Everyone is in a different movie. Swank tries to be stylized, but it sounds as if she's doing a bad impression of Cate Blanchett's Kate Hepburn from The Aviator. Aaron Eckhart is also stylized, but the movie ignores him far too much for his performance to take full effect. Hartnett is deadly serious, at odds with the rest of the cast. Johansson finds a happy medium, though she's a bit shaky in the first ten minutes, when she opts to ACT! the part.

The ladies do save the day, though. Kirshner and Fiona Shaw (as Swank's mother) are the most consistent with their performances, with the former suitably bewitching, and the latter chewing the scenery to the point of excess -- but it works. If only everyone in the film was working at the level of commitment Shaw displays. She's not just crazy, she's looney tunes, and it's delightful. Her limited screen time had me thinking of Baby Jane: The One-Woman Show. 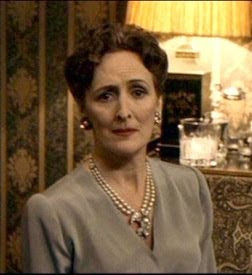 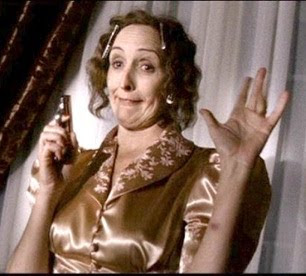 I don't think I am alone in stating that hers is the best performance in the film. Certainly most of the people in the room agreed that what the film needed was more of the Linscotts, and by Linscotts we mean Fiona Shaw.

In the end, I think it was a consensus among the group that, if anyone's to blame, it's probably editor Bill Pankow. The movie is cut confusingly, so that there's no telling where anyone is until we're already in the middle of a scene. It's irritating. I could even take dissolves if he at least timed them correctly, but they seem to occur haphazardly.

Also on the list: Whoever allowed this to be edited down from a three-hour cut. They should be taken out and beaten. Some movies require room to breathe, time to develop. Are producers aware of what they're adapting when they buy the rights to books? Watchmen, though I loved it, suffered from having to be edited down; count The Black Dahlia as another victim.

One last note. The most curious piece occurs at the end, when Hartnett suddenly has a vision of the body of the Black Dahlia as she was found by police. Until this moment, we have not seen the body, and we suddenly get to see the whole corpse in a hokey, outrageous cut that is almost comical. De Palma confesses that this was intentional (and he seems PROUD!!!), saying that it is akin to the "shock" at the end of Carrie. But Brian, dear Brian: your movie is about obsessing over this corpse! Would it not have been stronger to show the body once, at the beginning, and let that image haunt us throughout the rest of the film? Substance over style!

Eh, I'd probably buy it. It's enjoyable enough on a level of absurdity. But oy, what a disappointment!
Posted by Walter L. Hollmann at 11:32 AM