It's the Singer and the Song: Best Original Song, 1971

Time to make another mixtape, this time of Original Song nominees!

I have to confess, Glen Campbell...I'll Be Me sits with The Hobbit: The Battle of the Five Armies as the only non-specialty nominees I have not seen. But I've listened to it! And I liked it!

Now: the music. After the jump.


"The Age of Not Believing" from Bedknobs and Broomsticks
music and lyrics by Richard M. Sherman/Robert B. Sherman
**
It's an all right little tune, the first real number in this decent Disney musical. It's slow, dreamy, it's kind of hypnotic...but once it's over, you barely remember it happened at all. Sung matter-of-factly by Angela Lansbury, it's at least a little self-aware, but it sounds awfully tired.

Pair with: "Lost Stars" from Begin Again, if only for the novelty of hearing two songs that not only occur within their respective films, but actually effect the narrative!

"Bless the Beasts and Children" from Bless the Beasts and Children
music and lyrics by Barry DeVorzon/Perry Botkin, Jr.
****
Beautiful. Simple. Brings the connection between the kids and the buffalo into focus, and even though that's already pretty obvious throughout the movie, it's just such a nice tune. Having Karen Carpenter on vocals helps, of course -- she sounds like a guardian angel.

Pair with: "Glory" from Selma, so you can hear how it sounds to appeal to our better selves across time.

What on earth? I never worried about the term "square" until I heard this tune. Jesus.

Pair with: "Grateful" from Beyond the Lights. Not only does it cleanse the palette after the nonsense of Kotch, but it's fun to hear what today's go-to nominees (Diane Warren, who's never won) sound like compared to yesteryear's (this was Marvin Hamlisch's first, but Johnny Mercer's 19th).

"Theme from Shaft" from Shaft
music and lyrics by Isaac Hayes
****
I'm still pretty shocked this won, (a) because the lyrics don't start for some time, and when they do, are mostly recitative; and (b) it's sexy awesome. It successfully encompasses John Shaft, though I'm pretty sure his woman is not the only one who understands him -- I think the lieutenant understands him pretty well. Otherwise -- sexy, cheeky, cool. Right on.

Pair with: "Everything is Awesome" from The LEGO Movie, another hit that lay far enough out of the Academy's wheelhouse to make its nomination unusual and exciting.

"All His Children" from Sometimes a Great Notion
music by Henry Mancini
lyrics by Alan Bergman/Marilyn Bergman
***
Pretty catchy, and works on several levels. Is it tongue-in-cheek, a sarcastic reference to the good ol' union boys using "solidarity" to force the Stampers to join their strike? Or is it a reflection of the spirituality of Joe Ben, who accepts everyone and brings them all together? And why can't I get it out of my head?

Pair with: "I'm Not Gonna Miss You" from Glen Campbell...I'll Be Me: I know it's reductive to put the country songs together, but it's true -- there is a Country Spot sometimes. See also Crazy Heart, Tender Mercies and Country Strong.

An unusual choice, "Theme from Shaft" won, making Isaac Hayes the best-dressed Oscar Winner in history. But, and I hate to be that lame guy, I disagree, and send my vote to: 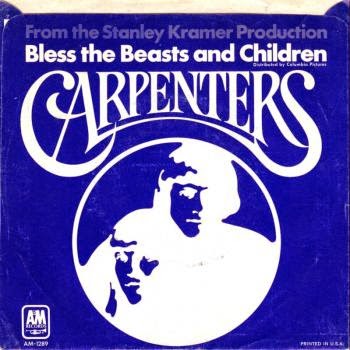 
for
"BLESS THE BEASTS AND CHILDREN"

Next: finally, we deal with Best Picture. Long after the 2014 Oscars, I know. But it's also long after the 1971 Oscars, so like...who cares?
From 1971: A Clockwork Orange, Fiddler on the Roof, The French Connection, The Last Picture Show, Nicholas and Alexandra
From 2014: American Sniper, Birdman, Boyhood, The Grand Budapest Hotel, The Imitation Game, Selma, The Theory of Everything, Whiplash