This post is a proud member of StinkyLulu's Fourth Annual Supporting Actress Blog-a-Thon. Check it out for more interesting perspectives on this year's crop of "actresses at the edges."

The week before Public Enemies, my friend and I caught a showing of Easy Virtue. It wasn’t on any of our radars until we saw that it was playing at the local art house. We did our research, found out it was Colin Firth and Noel Coward, watched the trailer, and knew we had to see it. So we did, expecting a pleasant diversion, nothing more. But as I have stated before, the movie affected us greatly, to the point that we both considered it the best film we had seen that year up until then (it was June, but hey, we were halfway through). Seven months later, I’ve fallen in love with a few others, but Easy Virtue has stayed at the tippy top. And part of that are the amazing performances given by the ensemble. Of especial note is Colin Firth, whose performance here is so good, he should be a double-nominee this year. But he’s not a Supporting Actress, so we must go to his equal, his sparring partner, the woman that I think of whenever my thoughts turn to Easy Virtue: Kristin Scott Thomas. 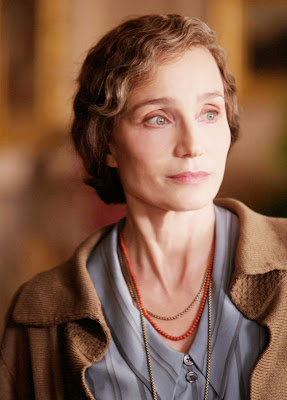 Let us join the Whittaker clan. They are, to quote a beloved film, “silly English types”, snobs living on a large estate in the country. The only son, John (Ben Barnes), arrives home from the Continent with a bride. And not only is Larita a lady race car driver, not only is she American, but she is the beautiful and sexually-charged Jessica Biel. She doesn’t get England! She’s allergic to the plant-life, she has a shadowy past, she refuses to go fox-hunting, she insists on celebrating Thanksgiving, she encourages the daughters to read “sexy books” and dance the Can-Can, and so on. Kristin (do you mind the familiar, dear? I hope not) plays the matriarch of this family, and she disapproves. Indeed, she is the chief antagonist in this delightful ditty of a movie.

Now, it would be very easy for Kristin to be the humorless snob. Thankfully – and, admittedly, due in part to the wonderful screenplay by Stephan Elliott and Sheridan Jobbins – Kristin does not do this. Certainly, she gives Larita an icy reception, keeping a strained, polite smile on the entire time – and this itself could be enough, for Kristin perfectly delivers her lines with honey-coated razorblades. But that’s not enough. For Kristin shows us the doting mother, the disappointed wife, the lioness protecting her pride. It’s funny, but a little heartbreaking.

There are three great scenes, two of which happen to be on YouTube thanks to MrsJohnWhittaker. In these three, we understand why Kristin is so determined to get Larita out of there.

In the above clip, we can totally get Kristin’s whole reasoning against Larita. The girl has these plans that seem practical to her, common sense even, but Kristin is there to bring her back to Earth. With a condescending manner, she points out the flaws in Larita’s life plan for her and John: they can’t move to the city, he is pure country. He’d never work the way Londoners work; it’s just not him. Kristin understands her son better than Larita would, theirs being a whirlwind romance. And so it is only natural that she tries to push this strange woman away, this American who has the gall to tell her what’s what in her own home, this person who insists on trying to understand a life she never will. The folly of this marriage is clear to Kristin, for Larita does not know her son. Wouldn’t any mother try to protect her boy from a previously married racecar driver with no means, who would force her husband into a life that’s not fit for him? Kristin’s skeptical tone is also one of slight panic: “John's brought up in the country, Larita, what would he do?” is significant. She’s not just badgering this girl, she’s concerned for her son’s well-being.

Another scene, unfortunately not available, is a conversation between mother and son. He bullies her about getting to know Larita and him leaving, when she finally loses patience and confesses it: they’re going to lose everything. The farm, the estate, all of it. While before we can only think of her as a humorless bitch, in this scene we understand her struggles. Her husband may be amusing to us, but he has done nothing to help their situation, all while her son lives in this fantasy world with Larita. “Stop being so naïve!” she cries to him, and you can hear her holding back the frustrated tears. She even plans on selling some acreage to a neighbor, and it pains her. The irony, of course, is that while she disapproves of Larita’s racing and smoking and other more “male” habits, Mrs. Whittaker is essentially the man of the house. No one else will take up the task, so it is up to her to save the family name. The woman has some pride, and even Larita admits what a strong and courageous woman she is to shoulder these burdens without complaint. Kristin is superb.

Later, as seen above, Larita offers to help Kristin financially. And this is a slap in the face. She won’t be grateful, and this won’t be a bridge of understanding. This interloper now knows her private shame, and sees Mrs. Whittaker as vulnerable. Larita is half the reason for the trouble, since she’s taking away the only real man left in the family. And that casual move to the snooker table as she shows what an able woman she is! She outplays the boys and proves to Larita that she can handle it herself. She’s done well this long; why shouldn’t she for longer?

Oh, also the tango scene. There they are together: the husband who hates her and the woman who is destroying her. That simple delivery: “No, I don’t.” She has finally given up, and she’s just realized this moment that it has been over for a long time. In a way, she even looks relieved. Though insulted in front of her friends and the rest of High Society, she knows there is no going back for any of them. She is finally free of these two weights that dragged her down.

Yes, Mrs. Whittaker is a dominating mother, overprotective and suffocating. She’s a snob. But she is also the only one in her family who gives a damn, and she’s going to do everything in her power to keep them together. While her methods can sometime she deplorable, while she may be ignorant, she is still terribly human. Kristin Scott Thomas imbues her with such relatable characteristics that we can only fear and respect her all at once.

I did not see this, but KST is a favourite of mine. Glad to see she's remembered.

I had a chance to see the film earlier in the year on an airplane. For some reason, five minutes in, and I changed the channels. A couple of months later, I caught up on Netflix and like you said, it really was a good (if not great) movie. The ensemble IS top notch, but fantastic job highlight Kristin Scott Thomas.

The scenes you handpicked to focus on were pitch perfect. I enjoyed her banter with Jessica Biel the most.

This looks fascinating...it played here for about a week and disappeared. Another victim of the sad changes in film distribution of late....

Hope to catch this some time...

Wow, Impressive Directing Techinques came rolling out of nowhere in the form of that black ball on the pool table.......

I am a big fan of Thomas, I shall see this after the award season ends. I thoroughly enjoyed "I've Loved You For So Long" so I am excited for this. And I'm surprised to see Biel fitting comfortably in those scenes you showed. I was afraid she'd seem displaced like Anne Hathaway in "Becoming Jane."

Lol---Thomas almost felt like Judi Dench for a bit with that dry personality she's conveying lol....But then again I only saw 3 clips.