Greatness at the Edges: Supporting Actress, 1974

Remember when StinkyLulu had a 1974 smackdown on his blog? I consider this my way-late weigh-in, just like it's my way-late Academy vote. I need a watch. And a calendar. 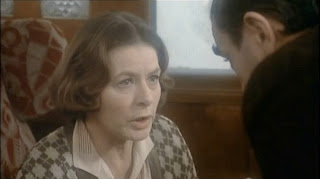 Ingrid Bergman in Murder on the Orient Express
**

When I first saw this movie as a young lad, I remember a "huh?" moment when hearing Bergman won the Oscar. Bergman is very good in this, I think, and it's absolutely shocking to see Ilsa Lund play this frumpy missionary. I believe every word she speaks, I believe her naively referring to the children of her mission as "black babies born more backwards than I" just as I believe her yelling, "Thou shalt not kill!" after the discovery of the body. It's a role that strikes one as merely stereotypical in the novel, but Bergman manages to convey some humanity in it.

But while I don't think this performance is deserving of the bile it's received in recent years, I certainly don't think it's Oscar-worthy. It's a solid performance of a simply-written character, but with such a large ensemble, there were at least three other superior supporting actresses to choose from. I really do love this movie, though I admit to being an Agatha Christie fanatic! 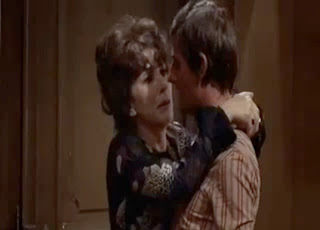 Valentina Cortese in Day for Night
***

Cortese is so electric and hilarious at film's beginning, it's a shame we rarely get to see her. I really only remember three key scenes with Cortese's character: the dressing-room, the Big Scene that she keeps flubbing, and the farewell dinner. My sister once said that she hates people who declare themselves divas, because real divas don't need to declare it, and they're rarely aware of it. Certainly this describes Severine, who boozes her way through the set of May I Present Pamela. Of course, she has her reasons, but these are hastily explained and dispensed with, never to be heard of again. Yet now the subtext is there, deepening our perception of the character.

Is the performance that deep? Not in the same way, but sure. Cortese seems to be playing with her own motivations, ones that work just as effectively and heartbreakingly as the one scriptgirl Joelle offers. Severine is confused, now jolly, now deeply unhappy, now joking, now motherly. Really, I miss Severine when she's gone, and her last scene made me wish for more. And that...that's an accomplishment.

Madeline Kahn is probably one of the funniest women to ever appear on screen. Her performances are as legendary as they are hilarious: Mrs. White, Elizabeth, the "brave, unbalanced woman" in What's Up Doc?, and of course, the Dietrich-parody that is Lili von Shtupp. She gets an entire sequence to herself, one in which she is tasked by the evil Hedley Lamar (Harvey Korman) to seduce and destroy the town of Johnson's black sheriff, Black Bart. She croons, she dances, she seduces, she falls for him. After all, what they say about men like Bart is twue.

Kahn's great ability as a comedienne, though, was not just to sell the jokes themselves, but to sell the character with sincerity. Seeing Lili go from exhausted singer-spy to a smitten romantic is not only amusing, but pretty adorable. Only Kahn could sell a song as corny/funny/bawdy as "I'm Tired" (They're alvays coming and going/And going and coming/And alvays too soon). Only Kahn could follow up an evening of carnality with the line, "Vat a nice guy." There's a reason why, more than ten years after her death, she's still one of the most admired and quoted character actresses around. It's a shame she quickly disappears after ten straight minutes of her hot comic genius, but I guarantee you'll be thinking about her at film's end. She;s easily the best part of one of the best comedies ever made. 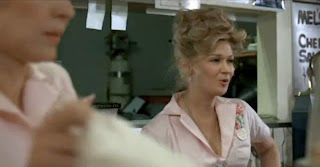 Alice... takes an awful long time to get going. Maybe this is because I knew she had to get there, but the first 40 minutes really feel like one long set-up to getting Ellen Burstyn to that diner to be a waitress.

You know who makes that 40-minute wait worthwhile? Diane Ladd's Flo, the greatest of all greasy-spoon waitresses. She's loud, she's crude, and you know that hair put a hole in the ozone. Of course, like everyone brassy individual the movies throw at us, Flo has some simple wisdom to impart, shrugged off with a cigarette in the bathroom as her friends break down. Really, anyone who doesn't want to be Flo's best friend is probably a real drag. 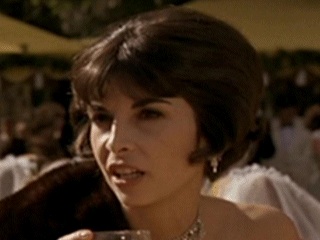 Shire has two big scenes: playing boozy, negligent mother who wants to run off with Tory Donahue; begging Michael to forgive Fredo after that famous kiss of death. Shire plays both pretty lousily, in my opinion. Clearly, it was the second scene that got her the nomination, and it's a damn well-written piece. Unfortunately, Shire's the actress in this case, and for some reason she's just no good in this movie. Like, at all. From her first scene to her last, I grit my teeth and begged for the end. I don't even think Shire's a bad actress for the most part, but this does not work for me.

I can't believe Oscar chose Bergman, and that Bergman chose Cortese, because for me, it's so obvious that the Oscar should have gone to...

Impressive take on all these nominees, Walter.

You'll probably discover that 1974 was a year of making amends, of honoring sentimental favorites, a practice that still dogs the Academy. The Supporting Actress race showed the lack of strong roles for women that plagued Hollywood through mid-1970's.

Ingrid Bergman--was truly surprised, as everyone else, with her win. The smart money was on Cortese, who was sort of like the Ingrid Bergman of Italian films... Bergman was cast so against type, and her heavy accent in the role so pronounced, that I suspect that it was a gentle in-joke...you can even see the twinkle in Bergman's eye during her big scene.... And I think a majority of the Academy loved her, so her win was for something more than just her performance.

Madeline Kahn--YES she was terrific in this film. My favorite scenes were those with her in them. Remember too she was in "Young Frankenstein" the same year, a film I wish the Academy recognized more. If she won here it would have been pleasant...but I don't think the Academy was ready to take "Blazing Saddles" more seriously than a few nominations.

Talia Shire--I saw her nomination as a consolation prize for ignoring her work in "The Godfather", where she had some heavy emotional scenes to carry. She was almost negligible here, but maybe Coppola, on behalf of his sister, made an offer the Academy couldn't refuse!

Diane Ladd--Was a welcome burst of no-nonsense energy in Scorsese's anguished road film, which was sort of a pilot for the subsequent TV series "Alice" and "Flo". Ladd was wonderful here, but I think her role was overshadowed by Burstyn and Scorsese. I would have been happy if she won.

Valentina Cortese--Actually was my choice. She was a foregone conclusion: appearing in a European Art film that found popular success, giving a vulnerable and moving performance, and nabbing several critic's awards. Her loss can be compared to that of Lauren bacall in '96. As you mentioned, though, her role might have been cut too short. I suspect the voting was extremely close here.

"Remember too she was in "Young Frankenstein" the same year, a film I wish the Academy recognized more."

Oh, I could NEVER forget Young Frankenstein, as you'll see as this series continues.