Richard Sylbert, production designer
W. Stewart Campbell, art director
Roby R. Levitt, set decorator
****
I don't think a single detail has been forgotten. The water department's walls are almost completely covered with the certificates and photographs of Noah Cross's ego, Jake Gittes' office has the art deco glass bricks of the period, and of course there's Mulwray's pond. At times cluttered, but so is my room, and that doesn't make it unrealistic.
EARTHQUAKE 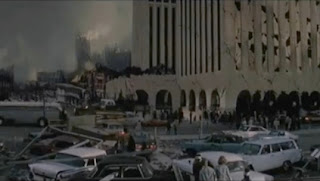 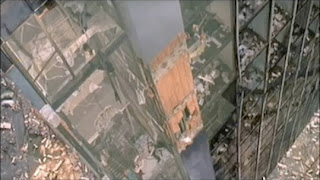 Alexander Golitzen, production designer
E. Preston Ames, art director
Frank McKelvy, set decorator
**
It's really all about the destruction, as Los Angeles becomes a maze of rubble. Many of the sets are genuinely devastating; other times, it's very clear that we're on a backlot. Goddamn do I love this movie, though.
THE GODFATHER: PART II 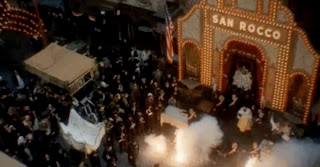 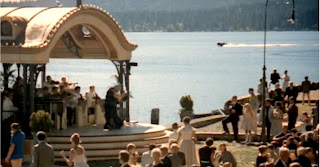 Dean Tavoularis, production designer
Angelo Graham, art director
George R. Nelson, set decorator
***
Early twentieth century Sicily and New York are invoked as effectively and subtly as 1950s Havana and Nevada. You always know what time period you're in, yet the execution is never flashily announcing itself.
THE ISLAND AT THE TOP OF THE WORLD 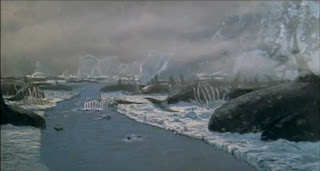 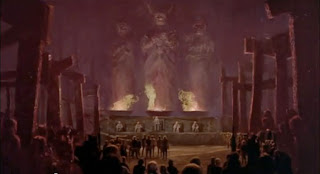 William J. Creber, production designer
Ward Preston, art director
Raphael Bretton, set decorator
****
I kind of just want to live in this building. Yeah, I know, it's a deathtrap, but LOOK AT THAT ORANGE OFFICE.
Oscar chose The Godfather: Part II, a fine choice, really. I see things a little differently and award... 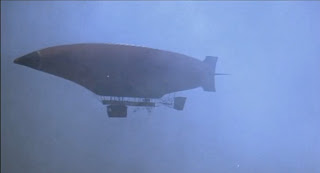 THE ISLAND AT THE TOP OF THE WORLD
for pure fantasy awesome
Posted by Walter L. Hollmann at 10:32 PM

Email ThisBlogThis!Share to TwitterShare to FacebookShare to Pinterest
Labels: 1974, Chinatown, Earthquake, Oscars, The Godfather: Part II, The Island at the Top of the World, The Towering Inferno

All in all there was some good design work in '74. Of course, almost all of these would now be done with heavy CGI effects; which makes these Art Direction nominees all the more impressive.

Walter, I would love to see your cluttered room nominated for an Oscar. LOL!!

I wish you could have seen "Earthquatke" in it's original Sensurround, which used large speakers to play a low blast that sounded like a mountain crumbling and actually vibrated the theater seats. Without it, "Earthquake" is simply laughable.

"Towering Inferno" also has its share of laughs except that it cruelly dispatches Jennifer Jones and others. Even longer than "Earthquake", it's painful to see today. The sets might have been arranged by any hotel's setup crew.

"Island at the Top of the World" was pleasant fantasy, but its nomination would have to suffice, as no one, not even the Academy, took this movie seriously. (Funny but in 2011, this might be seen as a major release worthy of major Oscar discussion...maybe you can see why I get so frustrated with today's moviemaking.)

"Chinatown" DID get all the details right... but the plot was so dense I suspect most viewers hardly noticed them, so caught up were they in following the plot.

"Godfather II" was probably the best choice here. The recreation of early New York was very effective, as were the Cuban settings and the Las Vegas Corleone Compound.

My soft spot for disaster films made me especially eager to watch Earthquake and Towering Inferno, and I was surprised to realize that while I found Inferno to be bloated, dull, and by-the-numbers for the most part (though I love Wm Holden), Earthquake is quite strong after the titular disaster strikes. The first act, with a boozy Ava Gardner trying to pass for Lorne Green's daughter (!!!!!!) is ridiculous, but I liked the way all the stories came together, the way everyone adapted to their situation. And I was genuinely surprised by the ending.

*sigh* I could only hope and wish that something like Island... would make it in today's Oscars. I love it so much, it was so transportive and fun.

I feel like I should do the 1975 Oscars next to see how much we agree on categories other than Best Picture!