In 1974, the Academy had two separate designations for the music categories: Original Score and Adapted/Song Score. We all know the former, but the latter was made especially for either original musicals or films that depended on arrangements of preexisting work. Previous winners included the documentary Let It Be, the musical Cabaret and the period caper film The Sting. Indeed, the category still exists, but Academy rules dictate that it is only to be used if there are a substantial number of films meeting the guidelines. Since the idea of the original musical went out with Xanadu, there's little chance of that happening, though as this year shows, sometimes all you needed was an arranger t get the Oscar.

Nelson Riddle adapting songs of the 1920s for The Great Gatsby
***

I feel so sorry for this movie. The intention is there, the actors are trying, the sets and costumes are perfect, but it just falls flat. Should we blame the editor obsessed with dissolves, the director obsessed with the trappings, or the cinematographer obsessed with nothing of interest? Certainly the script, credited to Francis Ford Coppola but rewritten by Vladimir Nabokov and Philip Roth, is part of the problem, with a large portion devoted to insipid romantic scenes between Gatsby and Daisy. And, of course, there's the miscasting of Mia Farrow in the lead role. It all looks pretty, but it's all for naught.

Riddle's score, actually, is part of the problem. Yes, The Great Gatsby is the novel that summed up the 1920s, but that doesn't mean we can't mix it up a little. Must we hear the Charleston every thirty minutes? Does "Whispering" have to occur at every Gatsby party? And, I swear, if I heard Redford and Farrow making pillow talk during "What'll I Do?" one more time, I would've unburied the corpse of Nelson Riddle and beaten the shit out of him. Mind, if I had the album with just the music, I probably would listen to it again and again, but within the film itself it's just all too much.

Here is the first of two original musicals nominated in this category. The film as a whole is pretty uneven, but what works is largely due to the songs. Beginning with simple, repetitive music and lyrics, the emotional oomph of the score matures as the characters develop -- just compare the opening tune "It's a Hat" with closing number "The Little Prince". Maybe it's just the delivery of these songs -- I'll take Gene Wilder and Bob Fosse over a bizarrely-shot close-up of Joss Ackland any day.

Though the songs may vary from simple and annoying to downright beautiful, the music by itself is typical of Frederick Loewe's greatness. The success of the entire second half of the film depends, I would say, on Loewe's music, most effective when it is unaccompanied by Lerner's words. The montage of the Pilot and the Prince at the oasis is effectively joyful because of the arrangement of "Why is the Desert"; the finale inspires tears because of the arrangement of "Little Prince" combined with "Closer and Closer and Closer". It's phenomenal work.


Paul Williams and George Aliceson Tipton orchestrating the song score by Williams for Phantom of the Paradise
*****
Um, that's a super spoilery clip, but it features the best uses of the original score and song. I suggest only looking if you don't mind spoilers or if you're familiar with the film.

I'm on record: Phantom of the Paradise is one of my favorite horror movies, ever. It's also one of my favorite musicals, ever. I've listened to this soundtrack more times than I can keep track of, in whatever way I could. When it came on TV one time, I recorded the songs with a tape recorder held to the speaker. When YouTube was born, I sought clips from the film and played it again and again. When my girlfriend got the soundtrack, you better believe we listened to that CD in the car for days (the music is in our respective ranges, too, so that helps). Now I finally have the score on my iTunes, and it's so gooood.

This is very much a song score, though. I think I can name off the top of my head all the instances of non-singing score: the conversation between Philbin and Swan when they first hear Winslow's music; the montage of Winslow trying to contact Swan after the music mogul stole his cantata; and the grand finale.

Oh my God, but does one really need an isolated score when the songs are this amazing? The greatest crime committed at the 1974 Oscars was the complete shut-out of Phantom of the Paradise from the Original Song category. Williams' "Beauty and the Beast" deserves constant play. "Old Souls" and "Special to Me" are beautiful songs, showcasing the talents of the long-missed Jessica Harper. Few finales sum it all up quite like "The Hell of It".


Oscar awarded The Great Gatsby, but I don't think it's any surprise to hear me go for something else entirely. 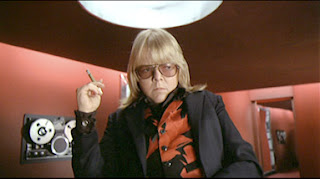 PAUL WILLIAMS and GEORGE ALICESON TIPTON
for
PHANTOM OF THE PARADISE
Posted by Walter L. Hollmann at 11:15 AM

I miss this category now.. And yet, in '74, the nominees were sort of slight, and subject to favoritism and sentiment.

You have to remember who the Academy members might have been then...most of them are dead now. The song "What'll I Do", used in your clip of "Great Gatsby", was a big hit in their heyday...probably was the Prom Theme for many of them, LOL..and Nelson Riddle was a well-liked and respected bandleader and arranger for decades. He would have won for scoring "Happy Birthday".

When "Phantom of the Paradise" was in release, "Tommy" was in production, and I would suspect a lot of industry insiders say "Phantom" as a pale imitation. Plus, Paul Williams was still a young upstart, not a movie celebrity, and was not likely to break into the Oscar pantheon at that moment. Also, this is the Academy that ignored the Beatles until 1970, and would shut out the Bee Gees in 1977.

On merit alone I'm surprised "Little Prince" lost...it had the right pedigree, and the music was pretty. As I mentioned before, it was not well-liked as a film for some reason.

"Mame", with Lucille Ball, which was eligible but not nominated, must have been really bad, to have turned off so many voters as to be completely ignored!

I'm about to rewatch Mame, but I remember it being so borrrrrrring. We'll see what a second go-round 12 years later does for me.