One problem I've never been able to get over is my dislike for saxophone in noir films. It seems to always show up in scores to neo-noirs, yet I can't for the life of me think of a precedent for it. Many of the original noir films had those big Elmer Bernstein orchestras, didn't they, like any other Hollywood film of the time? Someone point out to me the exceptions, because I can't think of any.

Anyway, I didn't care for Goldsmith's score, and I think it isn't needed except for the opening credits. Hell, there's barely a score in the movie anyway, right? That's one of the things I love about Chinatown, it's naturalistic take on the noir genre. Then, here and there, the score comes up again, and while I don't hate it, it's not my cup of tea.

Nino Rota and Carmine Coppola for The Godfather: Part II
*****

I feel like I would pick a fight with anyone who doesn't like the score to these films. Rota brings the old themes back with beautiful new work, and Carmine Coppola (father of director Francis Ford) adds some great work to complement him. Coppola's work can mostly be heard when young Vito is in New York, the most notable track coming during a neighborhood Catholic festival during which Vito makes a significant move to power. Rota, of course, is still giving us that immortal trumpet theme, but gives Vito his own theme, as well.

Really, it would still be amazing if it was the same old music from the last film. But it isn't, and the result is just as high-five worthy.

Richard Rodney Bennett for Murder on the Orient Express
****

Sidney Lumet was very clear that everything have a capital letter in his vision of Agatha Christie's whodunit. The performers Acted while wearing Costumes and walking amongst Production Design. So, naturally, Bennett wrote an Original Score, beginning with a loud, cymbal-crashing opening theme that sets the mood just perfectly. Eerie strings punctuate the unfolding of a child kidnapping/murder case. The jaunty Orient Express theme has the energy and glamor of a train ride with Lauren Bacall. The greatest crime is that the idea for an opening song was scrapped. If only!

Shanks is an odd little film, a semi-silent flick starring Marcel Marceau and his fellow mimes, in William Castle's final effort as director. It's beautiful and funny, and more than a little uncomfortable -- I'm pretty sure the 50-year-old titular puppeteer and the 15-year-old girl with him are supposed to be in love or something. It's more than a little weird, especially when he starts puppeteering corpses.

Since it does play out like a silent film, title cards and all, this is perhaps the most-scored out of any of the movies on this list -- hell, in this year, probably. The results are mixed, but I have to say it was, for the most part, a great success. The finale works as well as it does because of the music. If it wasn't for North's work, the corpse-puppets would just be creepy. It's really his score that makes this such an effective dark comedy. It's an odd little gem that's worth seeking out, movie and music both.

John Williams for The Towering Inferno
***

Suitably epic in parts, with that groovy 70s-ness for the more intimate moments. There are moments that drag, and I don't think it's as exciting as Williams' own Earthquake score, or as important as Alfred Newman's for Airport. But dammit, you've got John Williams scoring a big, epic disaster flick, so it must be great, right? Oh, sure, maybe a little unmemorable in parts, and maybe you don't even remember there being music in the helicopter scene even though the IMDb trivia specifically mentions it as a point of disagreement that Williams won -- sure, maybe you don't remember stuff like that. But then there's the main title theme and the finale and the theme for Fred Astaire's romance. I only wish it was two solid hours of pure music magic.

UPDATE: How did I forget to weigh in on my vote? Of course, you can see the stars, but just to reassure you, I agree with Oscar. 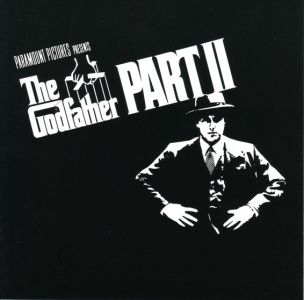 NINO ROTA & CARMINE COPPOLA
for
THE GODFATHER: PART II
though maybe it should've been in Adapted Score ;)
Posted by Walter L. Hollmann at 10:42 PM

Walter, I have a lot of catching up to do...And it will be a blast to immerse myself back into 1974, when I was a new Oscar fanatic.

Your posts have been great, even though, I must warn you, that you and I hold very divergent opinions....Funny that only one year later, we would be in such agreement about 1975's best film!!!

"Chinatown"--I agree the score is unobtrusive to say the least...I actually thought it was used poorly in the film. In the theme, I love the opening tingle establishing a vague Asian motif, with the sax (or is it a trumpet?) etching a lonely melody for Jake. The strings swell for Evelyn, and together make a lush combination suggesting doomed love.

"The Godfather Part II"--I think the score was Oscared for its main theme, heard first when little Vito sees the Statue of Liberty. It is a complete parallel to the first "Godfather" theme--you can play them on top of each other perfectly. And Rota, Fellini's composer, is a true fave, and my Paisan! (Check your soundtrack--the piece in your clip was not written for the film....one of the few tracks that were used from other sources....sorry!) Trivia: the score for the first "Godfather" was disqualified after the nomination, for using themes written before....allowing Chaplin's "Limelight", released in LA after 20+ years and eligible, to win.

"Shanks"--I have not seen... Alex North was a perennial nominee at that time....I will look for it on your recommendation.

"Towering Inferno"...was a rehash of "Poseidon Adventure", down to its Oscar-winning theme song. It was sort of a cliche even then...but perfect for this film!

"Orient Express"..would have been my choice. Great orchestrations, which fit the period well, and a memorable theme. I loved how the music chugs along as the train slowly starts up again.

I found Shanks available to watch online, by googling it. It's never been released on Video or DVD. The quality is poor, but the movie is pretty fascinating. Totally agree on Chinatown, and now I feel like smacking my head regarding the Godfather piece. Oy!

Orient Express, despite not being my first choice, is the only one that I own -- and have owned for quite some time. I have a special affinity for anything Agatha Christie.

One of the funniest things about your comments on Goldsmith's score, one of the greatest compositions of the 20th century, is that you do care about the score whether subconsciously or consciously. Also, Goldsmith's score was a replacement of Philip Lambro's original score for the film. Whether you substitute Lambro's score or try watching the film without any score, you will get to see how inferior the film is without it. Finally, there is no precedent to Chinatown-like score in film noir.