Two for One: Best Supporting Actor, 1983

It's rare enough that a single film takes up two nominations in an acting category -- but in three of them?! Thus was the case in 1983, and while The Dresser is to thank for that occurring in Best Actor, Terms of Endearment had that on lock - two nominations in Best Actress, and another two here in Best Supporting Actor. 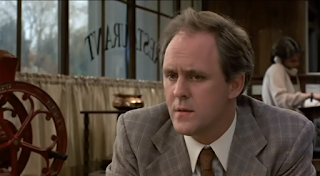 Jack Nicholson, who won the Oscar, plays former astronaut Garrett, who we glimpse throughout before he finally starts courting Shirley MacLaine's Aurora about halfway through (maybe more?) into the film. John Lithgow, nominated the previous year for playing a transsexual in The World According to Garp, here plays a lovestruck banker in a handful of scenes. One is coarse, the other more refined; one is single, the other married; both are lovers of the leads, but there's little hope for commitment there. 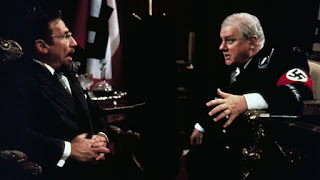 Another previous nominee: Charles Durning, here playing a Nazi officer in To Be Or Not To Be. The Mel Brooks comedy actually makes some poignant observations about Nazi-occupied Poland - but one of the film's great strengths is Durning's comic doofus, a man reveling in his authority, whose indulgences are a symbol of the excesses of the party. He's also quite funny. 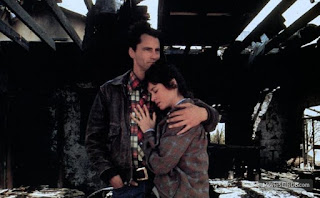 But there was also new blood this year! Sam Shepard was an early front-runner thanks to his quiet performance in The Right Stuff, the epic about the beginning of the American space program. Shepard plays Chuck Yeager, the first to break the sound barrier. Much of his narrative encompasses the first 30 minutes of the more than 3-hour film, though we do check back in on him from time to time. 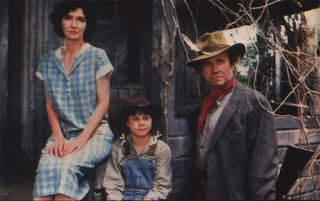 Also among the newbies: Rip Torn, nominated for Cross Creek, in which he plays a resident of the Florida swamps, a neighbor of Marjorie Kinnan Rawlings...who would base the character of the father in The Yearling on him. He has a handful of children and a wife who used to entertain in town, before he wed her and took her to the swamp. Hard living, that is.

Nicholson won, as I said, and for many it was a no-brainer. But is it a no-brainer for me? Check after the jump... 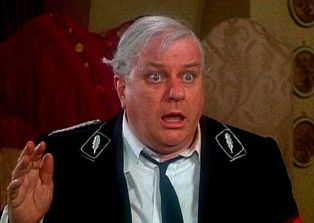 Charles Durning in To Be Or Not To Be
***
Like all great supporting roles, you look forward to seeing him again and again. Every scene with him is a stitch. As a small man given some power, he's believably tyrannical...and equally buffon-ish because of it. Who knew one could get so many laughs just from yelling, "Schultz!" 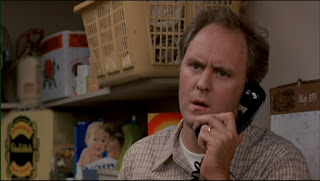 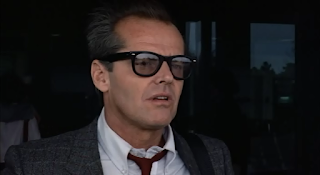 Jack Nicholson in Terms of Endearment
****
It's Jack at his full powers of Jack-ness: sexy, sleazy, and surprisingly sweet. The rep of the actor helps, of course, when Garrett communicates his reluctance to commit, but he telegraphs enough sincere regret to make you go, "Aw." There's no vanity here: the gut's out, the come-ons are pathetic, the confidence cannot help but be tinged with desperation. 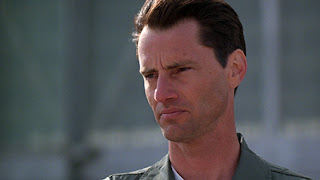 Sam Shepard in The Right Stuff
***
A quiet performance, and Shepard telegraphs disappointment and triumph in equally moving, subtle ways. Love his scenes with Barbara Hershey. 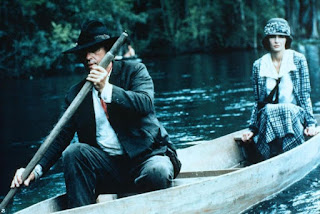 Rip Torn in Cross Creek
*****
Immediately recognizable as someone who exists in the real world - maybe you even know him! Torn's got that slack-jawed swamp people thing down, with his somewhat rough manners, and a strange magnetism that would woo a more proper woman like his wife. The scene (spoiler alert) where he gets Callie to kill her deer is breathtaking: he doesn't want it happen any more than she does, but he knows it's necessary.

Nicholson won, but I honestly have to go a different way and give my vote to... 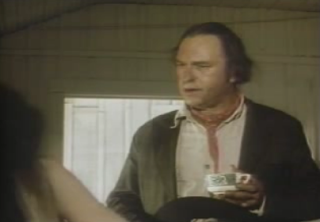 The 1983 celebrations continue all month long, with reviews of Oscar categories, Casting Coups, and more! Next week:

Thursday: The nominees for Best Original Score - Cross Creek, Return of the Jedi, The Right Stuff, Terms of Endearment, Under Fire

Email ThisBlogThis!Share to TwitterShare to FacebookShare to Pinterest
Labels: 1983, Charles Durning, Cross Creek, Jack Nicholson, John Lithgow, Oscars, Rip Torn, Sam Shepard, Terms of Endearment, The Right Stuff, To Be Or Not To Be