I've always found it a challenge to write about this category - it's to be heard, to be experienced. Though I suppose there is something to be said about this category having its favorites, as many do. It's how John Williams can get a third nomination for one series - of course, he would return for a fourth (The Force Awakens), and let us not forget that Jedi was his 19th overall nod....out of 50.

Williams had won Oscars already -- but so, too, had fellow nominee Leonard Rosenman, though both of his were in the Adapted Score category (Barry Lyndon, Bound for Glory). Another two-time Oscar winner was Michael Gore, who won this category, and Original Song, just three years previously for Fame. Poor Jerry Goldsmith - the Under Fire composer only had one Oscar to console himself with!

The odd man out, clearly, was Bill Conti, who in years past had only been nominated for Best Original Song. The first time for Rocky, and yes, it is incredible that it was only nominated in Song, not Score. The second time was for the Bond flick For Your Eyes Only. The Right Stuff marked his third nomination, first Original Score nomination...and final time in the running for Oscar.

Fortunately for him, he won. Should he have? Let's investigate.... 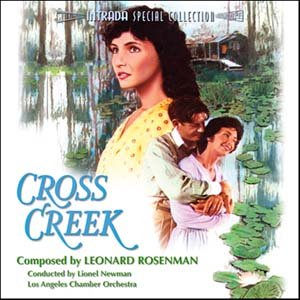 Leonard Rosenman for Cross Creek
***
The most old-fashioned of the scores, I think, the one that seems most suited to its film and to the period in which it takes place: one can easily imagine this exact score being used if this movie was made in the 1930s.

John Williams for Return of the Jedi
***
Give Williams credit, he never completely recycles material. Sure, we have the familiar themes, but now we have the Ewoks' "jub-jub" and the Emperor's theme. Still, as it is the original trilogy, there is a lot more of the same.

Bill Conti for The Right Stuff
****
Yes! Instantly makes your heart swell, the tears fall, with American pride! The right touch of bravado.

Michael Gore for Terms of Endearment
**
Treacly, very 80s, very fine. The most surprising nod here? I guess when something is as insistent as this music is, and in a Best Picture frontrunner at that...

Jerry Goldsmith for Under Fire
****
Surprising flourishes, such as the guitar and woodwinds, do much to help with the setting of the tale, mixed within your expected suspense score to create a very specific sound for a political/journalistic thriller.

Bill Conti
for
THE RIGHT STUFF