I know I should probably make an overall post about Original Screenplay, but let me raise a glass to the ladies. Because 2/5 of the films nominated here were written by women, and I love that.


Much is made of the few nominations received by female directors - four in total, right, including winner Kathryn Bigelow? But screenplay has been much kinder, it's true! The Second Academy Awards saw two women nominated for Best Screenplay: Josephine Lovett, for the provocative Our Dancing Daughters, an original work; and Bess Meredyth, for both A Woman of Affairs and Wonder of Women, both based on novels. The very next year, Frances Marion became the first woman to actually win the Best Screenplay Oscar, for her original screenplay The Big House.

Lovett, Meredyth and Marion were solo acts - the three ladies nominated here in 1983 had partners.

Barbara Benedek was mostly a television writer, married to Peter Benedek, who would later found UTA. She had written a number of unproduced plays and other scripts, one of which Lawrence Kasdan got a hold of; they collaborated on the screenplay for The Big Chill. No surprise that she nails the insecurities of these 30-somethings so truthfully: she was a psychiatric research assistant before entering TV.

Silkwood is a woman's story - who better than Alice Arlen and Nora Ephron to script it? Perhaps writing is genetic: Ephron's parents were the writers behind Carousel and Desk Set, and before Silkwood, she had already published a book of essays and a novel, Heartburn. Her friend Arlen was likewise blessed, a female journalist whose mother was a female journalist, and whose mother before her was a female newspaper publisher. The two would later re-team for Cookie; Arlen also wrote the screenplay for Helen Hunt's directorial debut, Then She Found Me, while Ephron...well, hello? Ever hear of Julie & Julia, You've Got Mail, When Harry Met Sally, Sleepless in Seattle....

Meanwhile, Lawrence Lasker and Walter F. Parkes were up for a teen thriller - they would be nominated again years later, but as producers for Best Picture nominee Awakenings. And Ingmar Bergman was up for a television mini-series he had whittled down to feature film length, his fifth screenplay nod.


Horton Foote won the Oscar for Tender Mercies, his first time writing an original work for the screen.  He previously won Best Adapted Screenplay for To Kill a Mockingbird. Fun fact: he was nominated last year at the Primetime Emmy Awards for writing Bessie...six years after his death. Hollywood!

And should Foote have won? Find out, after the jump! 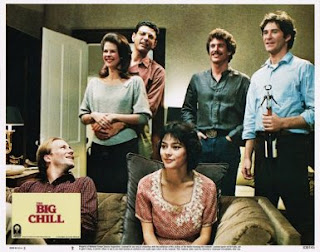 Barbara Benedek/Lawrence Kasdan for The Big Chill
*****
Like spending a weekend with your friends, eight completely-realized human beings -- even Chloe, hell even Frank, are afforded enough complexity to make a real person. Frank, but never false; funny, but never trivial. Ingmar Bergman for Fanny and Alexander
*****
Now imagine that same depth brought to three families' worth of characters, plus servants, actors, tradesmen, etc., in a tale ruminating on family, religion, love, childhood, aging; with magic, ghosts, mysterious androgynes, living statues, and a wife so understanding she makes Harold and Sarah Cooper blush. 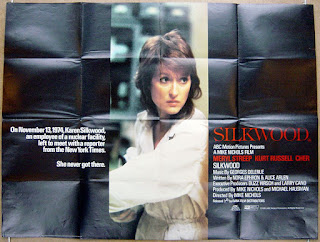 Alice Arlen/Nora Ephron for Silkwood
****
This could have been a preachy political thriller, but the sermon is hidden within a very human drama about one reg'lar woman's fight for what's right. Plants seeds early, subtly, economically.  And while the humor is never laid too thick, it's funny enough to wring deep belly laughs. 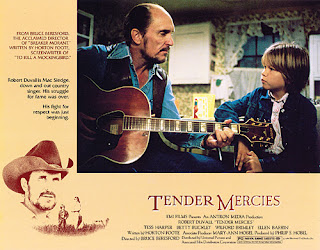 Horton Foote for Tender Mercies
***
Unobtrusive. There's no rising action, really, just the quiet reality of this man, this family, these people. It could be you, it could be anyone - but it's a country singer. Doesn't announce its themes, doesn't wrap it all neatly with a direct message. You got to meet it halfway. Question is: is that subtlety, or absence of actual content? 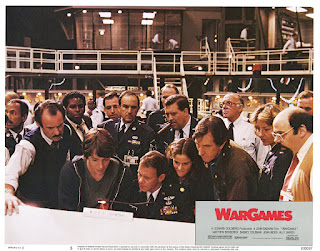 Lawrence Lasker/Walter F. Parkes for WarGames
***
Smarter than it has to be, accessible as it needs to be, funny as all get out. Spends time on all its characters, from the teenage hero to his parents to the men from Washington. A great speech scene, surprising twists, and genuine suspense.

Horton Foote won the Oscar for his first original screenplay -- but, my dears, I have to disagree! I think the Best Original Screenplay Oscar should have gone to... 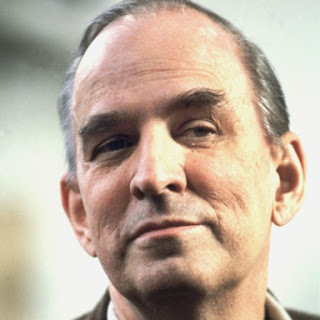 INGMAR BERGMAN
for
FANNY AND ALEXANDER

Tomorrow: Best Original Score, featuring the music of Cross Creek, Return of the Jedi, The Right Stuff, Terms of Endearment, and Under Fire.